Taijuan Walker struggled a bit, and hitters struggled a lot against Royals starter Ian Kennedy, dropping the finale but still winning the series 2-1 against the world champs. 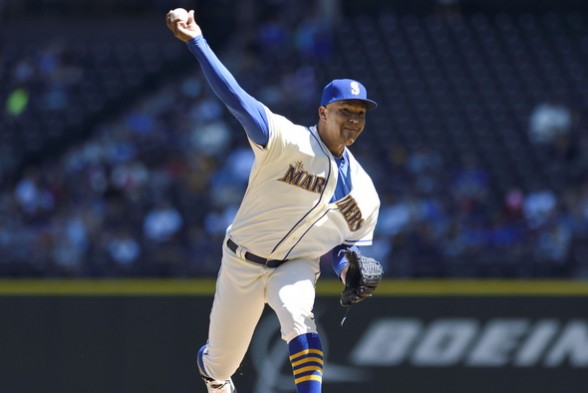 The Mariners wrapped up a successful homestand with a forgettable performance, losing 4-1 to the Kansas City Royals (box). Seattle went 4-2 on the homestand, falling in the series finale when starter Taijuan Walker (2-1) lost his first game of the season.

The Mariners looked primed for a sixth-inning rally after loading the bases with no outs,  chasing Kansas City starter Ian Kennedy. Dae-Ho Lee and Kyle Seager struck out before C Chris Iannetta delivered an RBI single, pulling the Mariners to within 3-1. Problem was, third-base coach Manny Acta waved Robinson Cano around from second base, resulting in an inning-ending putout at the plate when Kansas City RF Jarrod Dyson delivered a perfect strike to C Salvador Perez.

Walker struggled through his first rough outing of 2016, although he pitched well enough to keep the Mariners within striking distance. Walker allowed just five runs over his first four starts (25 IP), but gave up three runs off seven hits in his five innings of work Sunday. One was unearned. LHP Tony Zych pitched a 1-2-3 sixth, then Joel Peralta did his part in the seventh before LHP Vidal Nuno served up a solo homer to Kansas City’s Eric Hosmer to open the eighth.

The offense didn’t come alive until the sixth inning. By that time Seattle was already staring at a 3-0 deficit. LF Seth Smith and DH Robinson Cano each had a pair of hits, while Iannetta drove in the lone run. The Mariners’ biggest obstacle was called third strikes – RF Nelson Cruz (in the first) and Iannetta (in the second and eighth) were victimized by inning-ending strikeouts, while 3B Kyle Seager went down looking with the bases loaded for the second out of the sixth.

“(Kansas City’s pitchers were) very fine on the outside part of the plate.” – Seattle manager Scott Servais, choosing his words carefully when asked about the controversial called third strikes that got the Royals out of the first, second and eighth innings and also resulted in a Seager strikeout with the bases loaded in the sixth

Seattle’s 13-10 mark last month was the first time the Mariners have finished April with a record above .500 since 2009 . . . The Mariners have won five consecutive series. The last time they failed to win a three-game set was April 11-13, when the Rangers took two games to drop Seattle’s season record to 3-6  . . .  The homestand saw several individual milestones: RHP Felix Hernandez matched Jamie Moyer’s team record of 145 wins as a Mariner, 2B Robinson Cano collected his 1,000th RBI, 3B Kyle Seager and OF Seth Smith each hit his 100th career home run, closer Steve Cishek earned his 100th career save and LHP Wade Miley finished off his first career complete-game shutout . . .  Saturday night’s announced crowd of 43,444 was the second-largest Safeco Field crowd of the season. There were more fans in the crowd for that game than the combined total of either of the Mariners’ previous three-game series – against Texas (41,909 over three days) and Houston (42,826 over three days).

The Mariners will try to follow up a successful homestand – been awhile since those words were put together – with a seven-game road trip that begins Monday in Oakland. RHP Nathan Karns (2-1, 3.63 ERA) will take the bump for Seattle, while the A’s have RHP Kendall Graveman (1-2, 4.03 ERA).