Spencer Haywood, the greatest Sonic, has an even greater story that changed pro basketball. A Seattle filmmaker has documented the saga, which will debut at the Seattle International Film Festival. 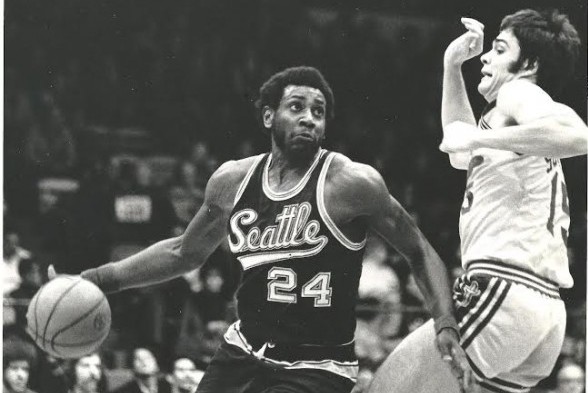 So vilified was Spencer Haywood that an opposing team forbid him to use the visiting locker room, forcing the Olympic gold medalist to change into his basketball uniform in the team bus and walk through the snow before playing.

So splendid was his early pro career in Seattle that more than 40 years later, he remains the best player to pull on the Sonics green and gold (unless you’re not impressed with a single season average of 29 points and 13 rebounds).

So controversial was his drug-addled late career that the Los Angeles Lakers, in the middle of the NBA Finals with a star rookie, Magic Johnson, kicked him off the team.

If any of this is at all intriguing, set aside the evening of May 21 to learn about the man who left the cotton fields of Mississippi to become Seattle’s first pro sports superstar.

On this Monday that the Seattle City Council votes on a pivot point in the long-running saga of the attempt to return pro basketball to Seattle, comes news from the roots of pro basketball here.

Full Court, a documentary film that chronicles one of the most exhilarating and tragic stories in NBA history, will have its premiere at the Seattle International Film Festival at the Uptown Theater, just a couple of blocks from the old Coliseum where Haywood energized a sports market that wasn’t sure pro ball was a big deal.

Haywood was good enough to help the U.S. win a gold medal in the 1968 Summer Games in Mexico City, but not old enough to play in the NBA. The original owner of the Sonics, Los Angeles entertainment mogul Sam Schulman, knew Haywood would fill his hoops house if he could get a court to agree that the NBA’s age minimum was an unfair restraint of trade.

But upon signing with the Sonics in 1970, neither Schulman nor Haywood knew that the court that would decide matters would be the U.S. Supreme Court. By a vote of 7-2 in 1971, the court said the NBA — whose representation included an eager young attorney by the name of David Stern — was operating illegally.

The abolition of the rule changed basketball forever. Starting with Haywood, numerous NBA greats from Moses Malone to Kobe Bryant to LeBron James proved that, for a talented few, college was a waste of time.

The court victory was the beginning of one of the most uproarious careers in U.S. sports. Ten years later, when he fell asleep on the Lakers practice floor during the Finals after a night of partying on crack and was fired, was its brutal end.

But Haywood has been sober for more than 35 years, regaining a quality life for himself, running his own business and living in Las Vegas. It was time to tell the story cinematically.

“There’s enough highway between him and the part that he can talk about it,” said Dwayne Clark, a longtime Seattle sports fan and successful businessman who is the film’s exceutive producer. “He’s been fantastic. It’s not always been easy. Like somebody wanting you to tell about your divorce: ‘Well, let me think about that.'”

The genesis of the film has its own good story. Clark, CEO of Aegis Living, a Redmond-based upscale assisted living company, was an early supporter of Chris Hansen’s efforts to build an arena that would bring back the NBA. At a dinner with other Hansen backers, he met Haywood for the first time. They spent most of three hours talking together.

Clark didn’t think too much more about Haywood until meeting him again. This time, the event was a charity fundraiser the past summer led by Seahawks QB Russell Wilson at a local resort. Clark recently had founded a film production company and was looking for subjects. Haywood was there and said hello.

The more they talked, the more Clark recognized that Haywood’s story could be his first film, especially after Haywood’s recent news that he had been elected to the basketball Hall of Fame.

“When I got home, I called him,” he said. “I said, ‘Spence, I want to make a documentary about you.’ He said, ‘I’ve been waiting a lot of years for this phone call.'”

But further conversations did not go nearly as well.

“Spence is a very stubborn guy,” Clark said. “I think he’s worked with a lot of people who haven’t been fair or honest with him. I think he was suspect of my intentions. We negotiated and he played hardball with me. The things he wanted were not possible. He talked to me like we were making a major Hollywood movie. I told him we’re not making $50 million blockbuster. It’s a documentary.

Or not. Haywood called back in an hour. In college in Detroit, Haywood had a mentor, Dr. Wayne Dyer, a teacher and counselor who went on to write 21 New York Times best-selling books on self-discovery and personal growth. Clark also was an avid reader of Dyer’s works, and had talked with Haywood about his teachings.

“I was pissed off, Spence was pissed off — then he told me Wayne just died,” Clark said. “Spence said, ‘I guess he’s intervened to tell us both to grow up and do this deal.'”

That was Aug. 29. The deal was on. Next Clark made a connection with AMS Pictures, a Dallas-based documentary filmmaker. Its CEO and founder, Andy Streitfeld, said he didn’t do sports films.

“I don’t want a sports film,” Clark said. “I want a human-rights and civil-rights film.”

Streitfeld liked the story so much he co-invested and the project was underway. The producers traveled the country, gathering interviews from NBA figures such as Pat Riley, Charles Barkley, Shaquille O’Neal, and former Sen. Bill Bradley, along with former Sonics great Lenny Wilkens, and longtime NBA executive Rick Welts, the former Sonics ballboy in Haywood’s time who is president of the Golden State Warriors.

Said Clark: “I told Andy it’s a story about a boy growing up poor in Mississippi, among nine siblings picking cotton, then getting to go to college by playing ball, but being denied a living because of a stupid rule that the Supreme Court said was wrong.

If you don’t know the name Spencer Haywood, don’t miss the chance to learn.