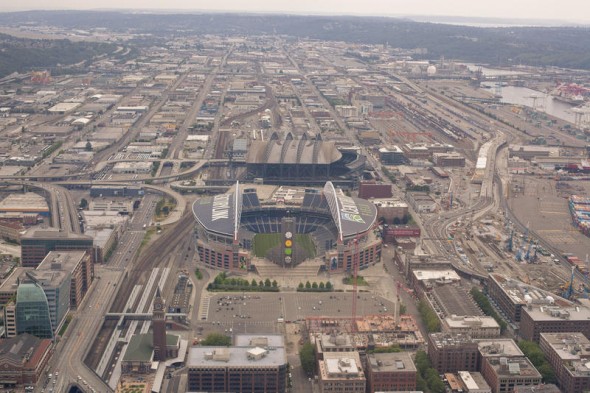 By a 5-4 vote — five women against, four men for — the Seattle City Council Monday afternoon voted to reject ceding a portion of Occidental Avenue South to hedge-fund manager Chris Hansen so that he can construct his proposed half-billion-dollar basketball/hockey arena in Sodo. Without the street vacation, there is no way Hansen can proceed with his project.

Councilwoman Gonzalez, who previously had not indicated her choice, cast the decisive no vote, saying she had a “profound and deep struggle” over whether to sell the street to Hansen.

“I am wholeheartedly in support of bringing NBA and NHL teams to the city of Seattle,” she said at the council meeting. “I hope that we can do so without further compromising the vitality of the port and our rich maritime and industrial history in this city.”

Vacating Occidental was viewed as the last major step that Hansen needed toward getting a master use permit and making his $490 million arena “shovel ready,” which might have helped him acquire an NBA team before a memorandum of understanding for the project with the city and King County expires in November, 2017.

Had the vote gone Hansen’s way, the city would have received $18 million to $20 million from the developer in addition to a pedestrian overpass, a public park and additional sidewalk space. Now, Hansen’s plans to lure an NBA franchise to Seattle to replace the Sonics, who departed for Oklahoma City in 2008, appear to be largely scotched.

The NBA has stated repeatedly that it has no plans to expand or relocate a franchise prior to the November, 2017 deadline.

Hansen’s project has faced strong opposition from the Port of Seattle, the Seattle Mariners, The Seattle Times and many others, who have concerns about traffic and additional infringement on the maritime industrial area surrounding the stadium district.

The Mariners received a vacation 20 years ago on another portion of Occidental Avenue in order for them to build Safeco Field, but Hansen and a legion of supporters couldn’t sway the Seattle City Council in their behalf.

Had Hansen been successful, he and his investors could have received up to $200 million in municipal-bond funding for his facility, which was scheduled to be paid back from arena operations.