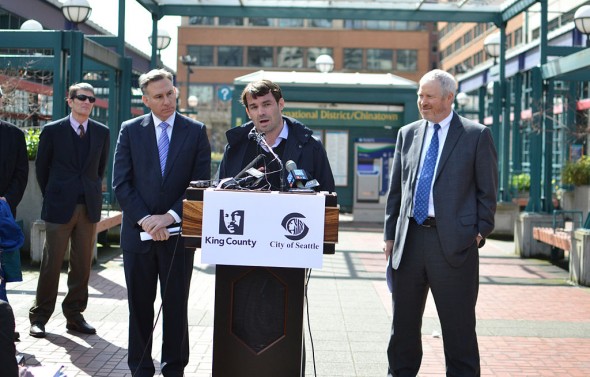 Chris Hansen in 2012, in more optimistic times / City of Seattle

For sports fans reeling from the 5-4 vote by the Seattle City Council Tuesday that denied Chris Hansen the street vacation he sought for his arena in Sodo, ending his pursuit of public funding help, Bruce Harrell has an explanation. The council president was talking from a figurative 30,000 feet, but he is wise about the Seattle political culture.

By phone, Harrell was interviewed by Dave Mahler on 950 KJR radio less than 90 minutes after a dramatic, poignant afternoon civics lesson in council chambers.

Harrell, whose advocacy for the return of the NBA dates to his no vote in 2008 against the $45 million settlement the city accepted that let the Sonics flee to Oklahoma City, and continued with a yes vote Tuesday, admitted to yet another political disappointment and was “walking it off.”

Harrell, a former University of Washington football star, then answered a question about the largest factor that decided the outcome:

“Consider the national mood right now. I don’t expect your listeners to follow all of the presidential debates about income inequality, but there’s an ongoing conversation about those that have a lot — the Chris Hansens of the world — and those that do not.

“There’s a strong political push to make sure that port jobs and labor jobs come to the forefront of the conversation. When people realize there’s $200 million (the county/city bond loans) going into the professional sports business, where athletes are millionaires and fans have discretionary money to attend, there’s a mood that that is not the priority of the city. The priority of the city are people who are losing out on income equality.

“Consciously or subconsciously, it sets the stage for the political debate. That’s the larger issue. While that’s not talked about at city hall or on the street, that’s in the back of minds that governs the front of their reactions.”

That is as concise and accurate an explanation as can be found regarding why Hansen’s plan that began in 2011 and survived all manner of preposterousness (remember the 2013 pursuit of the Sacramento Kings? The NBA vote to deny relocation? The influence peddling by Hansen that broke California law? The bailout by partner Steve Ballmer to buy another team from its racist owner?), only to die on the civic steps of the town where he was born and raised.

Led by Sally Bagshaw, the four other women on the council — Lisa Herbold, Lorena Gonzalez, Kshama Sawant and Debora Juarez — decided in favor of the have-nots. The four men — Harrell, Tim Burgess, Rob Johnson and Mike O’Brien — sided with the Hansen plan.

In this case, the have-nots were perceived to be job-holders in the maritime/industrial workforce, even though there is no such business within the footprint of Hansen’s arena, nor was there in the five years of lamentation and documentation by the Port of Seattle and the longshore union any direct projection of a single job loss caused by a third sports venue in Sodo.

The port’s business has been shrinking for years, so much so that the port finally decided to team up with its longtime rival, the Port of Tacoma, to form the Northwest Seaport Alliance, in order stay in the fast-changing container game.  But none of the myriad national and global factors compromising POS’s economic future — the advent of super-giant container ships, the widening of the Panama Canal, etc. — was mentioned Tuesday.

The closest anyone came to the bigger picture was when Sawant drew a distinction between the port and its workers. As a self-identified socialist, she was all in favor of keeping middle-class jobs, but she eviscerated the port by resurrecting a decade-old quote from then-U.S. Attorney Mike McKay, who described the port as “a cesspool of corruption.”

But Sawant said the greater good was served by preserving port jobs. Her sentiment was echoed in some form by her fellow nay-sayers, who evoked the port’s long history, traditions and contributions.

Juarez even dragged out the old chestnut: “You can always build an arena anywhere. You can’t build another deepwater port.”

No matter how uncertain the port’s future, that simple expression probably swung some council sentiment, along with the steady stream of appearances at every council meeting  by longshoremen, truckers and other business people affiliated with freight movement. They couldn’t prove the threat, but they spoke with conviction, and that was enough.

Sonics fans had a desire. Port workers identified a need.

That speaks to Harrell’s point — the liberal political sensibility of the big city is reflected in the makeup of the council, which spends most of its time allocating its resources to people in need. Agree or disagree, that’s how it’s been for about 20 years now.

Harrell’s reference to income inequality is spot on. It’s providing much of the fuel for the presidential campaigns Donald Trump and Bernie Sanders.

If the Mariners or Seahawks needed today the same public help for stadium construction they received in the 1990s, when thefeds and some local governments had budget surpluses, they would be turned down flat.

That said, the city walks away from the best deal ever provided Seattle by a sports-venue developer. To win approval, Hansen kept adding features and public amenities costing collectively more than $100 million. He said yes to nearly every improvement suggested by a council member seeking to please a constituency.

The deal is so good for the public side that Hansen probably can’t attract a private equity partner for an NHL franchise. The hockey billionaire likely would look at the commitments and ask Hansen, “Are you crazy?”

In the end, Hansen hasn’t provided what the project most needed — an NBA team. He needed the street vacation first, but five council members were hung up on one concept: The team was hypothetical, not assured. Council member Tim Burgess mildly scolded his colleagues, saying that anyone looking for a guarantee of a team is “dealing in fantasy.”

The irony is that the team is as hypothetical as are the port’s claimed job losses due to the arena location.

Faced with a choice between two unknowables, five council members chose to side with the have-nots. Any why not? They were the ones who elected them.

Pity that in a city as affluent as Seattle, a way could not be found to accommodate both sides. Bellevue probably doesn’t have two sides. Or Tukwila. The Chris Hansens of the world, as Harrell described them, may be more welcome there.