To make a tough situation worse — the cretins

After the City Council voted against Chris Hansen’s arena, some sports fans flooded the accounts of the female council members with disgusting comments that only made matters worse. 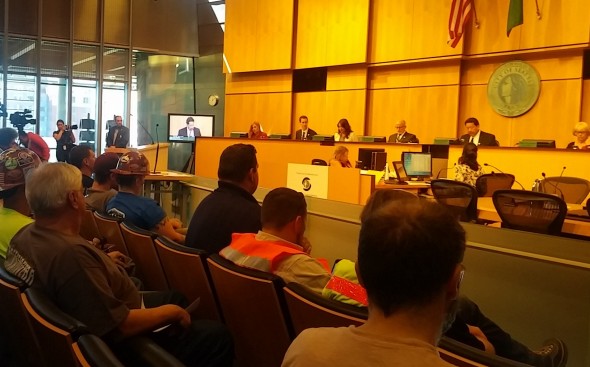 Pity that the proposed Sodo arena’s public plaza won’t be available. Because it would be a fine place to round up the social-media thugs harassing the five female Seattle City Council members who voted no Monday on Chris Hansen’s plans.

But there’s Westlake Center. Maybe Green Lake. Better yet — KeyArena! Lots of people are attempting to pump life into the old barn for less worthy ideas than a public shaming hall.  Five bucks per tomato, proceeds to the Lander Street overpass that will otherwise never get built without Hansen’s private millions in the funding package.

The vitriol directed at the five female council members who denied the Occidental Avenue vacation is not only incontrovertibly disgusting on its own, it helps advance a stereotype of the mindlessly belligerent sports fan who is contemptuous of anyone who doesn’t share his (or her) views.

I presume that Sally Bagshaw, Lisa Herbold, Lorena Gonzalez, Debora Juarez and Kshama Sawant can rise above petty vindictiveness to continue to do the professional jobs they were elected to do. But would anyone blame the council members, should Hansen offer an alternative plan — or another high roller advance a similar sports-venue idea needing public support — if they tell Hansen to shove his swash right up his buckles, along with his rodent minions?

Former Seattle mayor Mike McGinn was on 950 KJR radio Wednesday afternoon. He was the one who struck the deal with Hansen in 2012 for a five-year effort to bring back the NBA with a new arena in Sodo that included up to $200 million in construction-bond loans from the city and King County.

He was disappointed in the outcome. He also understood that projects of this interest sometimes have a way of regenerating after a political setback. But not if the gatekeepers are demonized and vilified.

“It’s very damaging to the ultimate cause,” he told Dave Mahler of the rampant cretinism. “You see some of the worst stuff about race, religion and gender. It’s wrong, and now we’re talking about that.

One of the ugliest posts came from a guy unabashed about using his name, Jason M. Feldman of Lynnwood — an attorney! At least for the moment. Puget Sound Business Journal learned that his license is facing suspension over an episode in which a female client claimed he sexually assaulted her.

Feldman wrote an email to the “dishonorable women of the council,” which said in part,  “As women, I understand that you spend a lot of your time trying to please others (mostly on your knees) but I can only hope that you each find ways to quickly and painfully end yourselves. Each of you should rot in hell for what you took from me yesterday.”

Perhaps that is Feldman’s job application for a Cabinet position in the Trump administration.

Independent city reporter Erica C. Barnett posted to her blog Wednesday a sampling of the dreck that washed up on the council accounts. Yes, we all know it’s a minority response, but that’s no solace when you’re a target. It’s a sampling straight from the sewer that has become the 2016 presidential campaign.

Hansen felt compelled to put out a statement on his website that attempted to get the attention of the mouth-breathers.

“While we are all naturally frustrated with the outcome, I know that the vast majority of our passionate and dedicated supporters agree with me that such comments have absolutely no place in our community,” Hansen wrote. “While we may not agree with the Council’s vote, misogynistic insults, vile comments and threats are unacceptable and need to stop. We should all show respect for our elected officials and the legislative process, even if we disagree with their decision.”

McGinn’s successor, Ed Murray, who was a supporter of the arena, also fired back, saying Wednesday, “Seattle is better than this,” although that statement seems more aspirational than accurate.

“The disappointment some felt at the outcome of the vote is understandable,” he said. “But what is not understandable is to bring gender into the conversation. It is wrong. To spout sexist rhetoric about council members is wrong. This must stop.”

As a gay man, Murray talked about being targeted for insults from homophobes, and tried to inspire actual thought.

Spectator sports wouldn’t be the same without unbridled passion. But this episode is like the big drunken lout in the 300 section slugging a kid in the rival jersey: Pure recklessness that’s harmful to victim, witnesses and the purpose of the enterprise.

While politics has always been a nasty business, it’s too bad the newbies on the council had to go through this early vituperation over a sports venue. Imagine when it’s something important.

Why bother buying sandpaper bedsheets when you can run for office?