The Seattle Thunderbirds, 12-1 in the Western Hockey League playoffs, are in Manitoba for the first two games of the finals Friday and Saturday as they seek their first WHL championship. 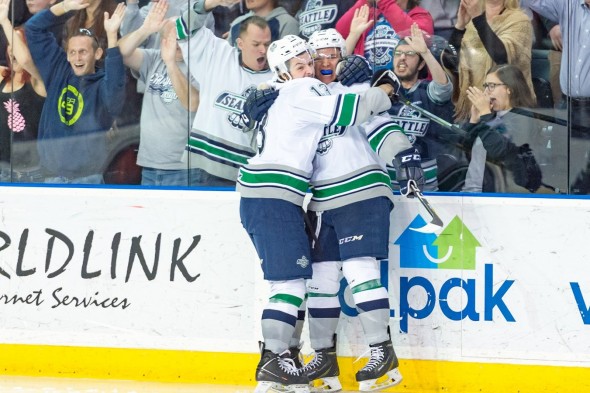 After a late-season push that helped them win the U.S. Division, the Thunderbirds have spent the entire postseason skating downhill, going 12-1 in the playoffs en route to the team’s first Western Hockey League finals since 1997. The Thunderbirds open the final best-of-seven series against the Eastern Conference champs, the Brandon Wheat Kings, on the road in Manitoba Friday.

After claiming its first U.S. Division title since 2005, the Thunderbirds kept their late-season form going, sweeping the Prince George Cougars in four games to start the playoffs. The Everett Silvertips managed to win the opener of the Western Conference semifinals, but lost the remaining four games.

In the Western Conference finals, the Thunderbirds swept the Kelowna Rockets. In game four, winger Keegan Kolesar scored a goal with three seconds left in regulation to force overtime, before Mathew Wedman, 16, pulled through for Seattle midway through the second overtime.

Everything is clicking for the Thunderbirds. Goalie Landon Bow, acquired mid-season from Swift Current, has allowed an average of 1.54 goals per game in the playoffs, saving 94 percent of everything sent his way.

Brandon, meanwhile, has gone through the Edmonton Oil Kings, the Moose Jaw Warriors and the Red Deer Rebels to reach the finals. Centers John Quenneville and Nolan Patrick have scored 13 and 10 goals in the playoffs, respectively, the WHL’s top two postseason scorers. Five Wheat Kings players are in the top six for overall points in the postseason, while Seattle’s points leader, Mathew Barzal, is seventh.

Games one and two are in Brandon Friday and Saturday, while the Thunderbirds will host games three and four at the Showare Center in Kent Tuesday and Wednesday (7:05 p.m. both games). Seattle would also host game five, if necessary, on April 13.

At stake is the Ed Chynoweth Cup. Seattle has never won the cup, while Brandon won its last WHL title in 1996. The winner will also secure a berth to the Memorial Cup, contested among the champions of the WHL, Ontario Hockey League and Quebec Major Junior Hockey League, as well as Red Deer who is hosting the competition.

“At this point there’s been a lot of hockey played. You just have to make fewer mistakes than the other team and capitalize on your opportunities.”