Two quarterbacks with big college resumes who went undrafted, Trevone Boykin and Vernon Adams, are at Seahawks rookie mini-camp this weekend, hoping to learn in the shadow of Russell Wilson. 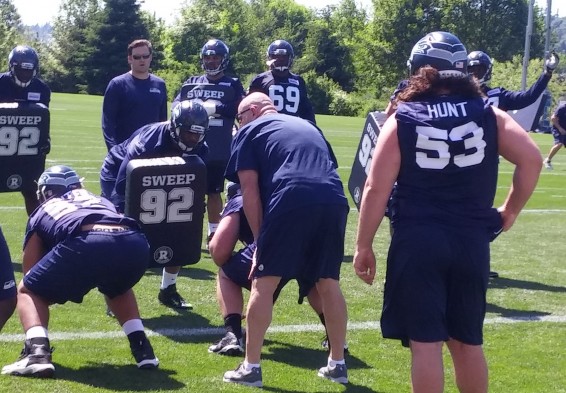 RENTON — Whatever the Seahawks end up doing for a backup quarterback, it figures to be entertaining. At least for a weekend in May. One of the more intriguing figures in the modern history of college quarterbacks in the Northwest is hanging out with the Seahawks, trying to hang on.

Vernon Adams played three years at Eastern Washington, where he nearly beat the University of Washington in 2014. Then he transferred to big-boy ball at Oregon, where he did beat the Huskies, 26-20 last fall. Adams threw a combined nine TD passes in the two games against UW.

Now he’s fighting for a seat at the adult table with the Seahawks.

“My schools, Eastern Washington and Oregon, are both four hours away,” Adams said Friday, demonstrating a deft grasp of football geography. “That’s awesome. I love Seattle. I trained out here in Bellevue. When it’s all said and done, whether here, Canada or wherever, I’ll be living in Seattle. Just happy to be here.”

The easy rejoinder is that he’s happy to be anywhere. For as much acclaim as attended Adams’ college career, not only was he undrafted, he went unsigned as a free agent. Just as he had no FBS college scholarship offers coming out of high school in Pasadena.

He’s at the VMAC on a tryout basis this weekend at a three-day rookie mini-camp, joining 67 other players, only 10 of whom are draftees, in a desperate scramble for what might be one or two available roster spots in the fall.

But he’d really like to stick here, and not just because his girlfriend and infant son are living two hours away in Yakima. The Seahawks are known in some quarters as Stumpy QB U. At 5-foot-11, he’s the same height as Russell Wilson, albeit 20 pounds lighter.

“Everybody’s comparing us,” said Adams after the first practice. “It’s an honor being compared to a Pro Bowl/Super Bowl quarterback. I just embrace it and learn what I can.”

Adams wasn’t seen by many pro scouts as the next Wilson. That didn’t mean it was easy to sit through the NFL draft the past weekend.

“It was tough, but it’s tough for a lot of people,” he said. “I’m just blessed to go as far as I’ve come. I’m very thankful the Seahawks gave me this opportunity.

“I’ve come farther than anyone in my family. I got two degrees.”

He also has some competition in rookie camp — another short collegiate star, Trevone Boykin of Texas Christian.  He threw for 10,728 yards in 48 career games with 40 career starts, but also went undrafted, partly because he’s listed at six feet, and shares another characteristic with Adams — they came from spread offenses in college, which has no place in the pros.

They are hanging around in case the incumbent backup, 34-year-old free agent Tarvaris Jackson, gets a job where he might get to play some. Being behind the nearly indestructible Wilson — he hasn’t missed a meaningful down in his four years — can be an empty experience, even if it pays well.

Boykin is so eager to try it that he sounded as if he were ready to duct-tape himself to Wilson.

“I was coming to the locker room and he was coming out,” he said of the first meeting Thursday with Wilson. “I shook his hand  . . . I knew who he was and he knew who I was. He told me he’d watched a couple of my games, and I told him, ‘I watched more than enough of your games.’

“I told him I was going to stay in his hip pocket and soak up everything he has to give me.”

For whatever one day’s padless practice is worth, Boykin looked a little more accurate, while Adams was a more fluid runner.

“He had a fantastic showing at Oregon,” said Seahawks coach Pete Carroll of Adams. “To see him play so efficiently and be such a play-maker . . .  he plays much in the same kind of formula that Russell has played – mobile, play-making, big arm, efficient guy. 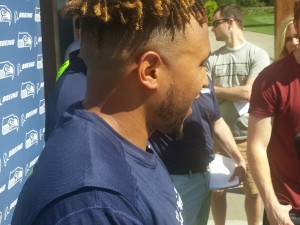 “If you remember, Russell was one of the most efficient guys in all of college football and I think Vernon led the country in efficiency.”

Carroll was equally charitable toward Boykin.

“His versatility and his style of play is so similar to Russell’s,” he said. “He’s got a big arm. He’s a very creative athlete. He’s got great instincts and great vision. His ability to run and make people miss and get out of trouble is very similar to what Russell does.

“I thought that the opportunity to have both those guys in the same offense, it gives us a chance, if it works out, to maintain continuity with one of the backups.”

Both players are hoping the incumbent back-up, 34-year-old free agent Tarvaris Jackson, finds an NFL gig where he can actually play some. Behind the nearly indestructible Wilson — he hasn’t missed a meaningful snap in four years — it gets a little boring, even if the pay is good.

For either Boykin or Adams, there would be no chance for boredom, and a big chance for vindication.

Before practice began, the Seahawks finally released the names of 13 free agents who signed with Seattle after going undrafted last weekend: