Even by his standards, Stephen Curry was astonishing Monday. A week earlier, Seattle basketball fans were astonished too, in the opposite way. How long can each go on? 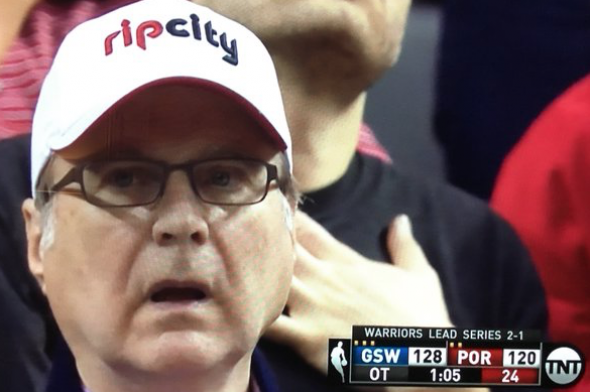 Paul Allen, watching Stephen Curry in overtime as he watched the Patriots’ Malcolm Butler in the Super Bowl.

Never has Paul Allen been more at one with the national pro hoops constituency than when he was captured by TV cameras slackjawed at Stephen Curry Monday night. Sitting baseline at Moda Center in Portland, the Trail Blazers owner watched helplessly as Curry put up an NBA-record 17 points in overtime as Golden State won 132-125 to take a 3-1 series lead.

Less than 12 hours later, Curry was named Tuesday the NBA’s MVP, the first unanimous selection in the award’s history.

After Monday, he could have been appointed king, behind the motto: “America Made Great Again!”

After almost three weeks of injury absence, Curry dropped 40 on the Blazers, 10 more than his season average in a game he didn’t start, in which he was supposed to ease back with 25 minutes or so. Curry also had nine rebounds and eight assists.

So the screen grab of Allen’s face became the instant internet meme that said everything without words.

The Blazers were valiant, having won game three at home Saturday to cut the Warriors’ series lead to 2-1, then going up 16 in the first quarter Monday. But Curry came in, missed his first nine threes to get his range-finder re-calibrated, then went thermonuclear.

The most any player scored in an NBA OT period, regular season or playoffs, was 13, by the Blazers’ Clyde Drexler a quarter century ago. The Blazers, a solid defensive team, knew the ball was going to Curry but swatted helplessly at him like kittens reaching for a Christmas ornament that’s too far away.

From a Seattle perspective, the look on Allen’s face was identical to the one he had in Phoenix 15 months earlier when his Seahawks were on the edge of a second consecutive Super Bowl when The Play That Cannot Be Unseen happened.

In making that connection, The Washington Post concluded, “poor Paul Allen,” a phrase believed to be a first in the 30 years since Microsoft became a public company. Or maybe the Post’s owner, Jeff Bezos, ordered a sarcastic shot taken at his fellow Seattle billionaire.

While there’s no need for a pity party for the wealthiest owner, by a factor of at least two, in the NFL and NBA, it is possible, by taking a step back, for Seattle fans to bathe in cruel irony.

A week earlier in an opening-round series, Allen was exuberant after his Blazers took down the Los Angeles Clippers, owned by another Seattle billionaire, Steve Ballmer (as you know, billionaires are to Seattle as poodles are to Beverly Hills — everywhere). The Clippers blew out the Blazers in the first two games, only to have Portland sweep the next four for the right to step into the Curry tidal wave.

The irony is that two Microsoft-grown guys had to leave Seattle to get their fix of the NBA. Seattle has been out of the game for eight years and is in no immediate prospect of returning.

There is no direct connection between the narratives, but the fact that Allen and Ballmer have playoff teams operating in the apex of the basketball calendar, while at the same time Seattle continues to spit up on itself trying to get back in, is painfully remarkable.

After Microsoft went public in 1986, making Allen wealthy, he quietly inquired about purchasing the Sonics from then-owner Barry Ackerley to satisfy Allen’s hoops jones from childhood. Spurned, Allen went to the next closest team, in Portland, and bought the Blazers in 1988 from California real estate developer Larry Weinberg for $70 million.

He also helped fund the construction of the Rose Garden, now Moda Center, which opened the same year, 1995, as the KeyArena remodel. The Portland building remains a quality pro hoops venue; the Key is not, nor can it be remodeled again into one.

Ballmer is the same sort of hoops hound as Allen, but his day job as boss of the Redmond computer shop kept him from owning a team, although he did offer $150 million in a failed effort in 2008 to keep the Sonics from moving to Oklahoma City.

In 2013, Ballmer was the biggest part of an effort led by investor and Seattle native Chris Hansen to poach the Kings from Sacramento for a proposed new arena in Sodo. But when the NBA told Hansen/Ballmer to drop dead, Ballmer bolted from the partnership to buy the Clippers from Donald Sterling, a loathsome character who was ousted from his ownership not long after Ballmer was ousted from Microsoft.

The timing was perfect for Ballmer. The timing has never been right for getting Seattle back in the NBA, which continues to look upon the market the way a dog views a skunk after having been sprayed.

Hansen may still have an arena play left until his five-year deal with the city runs out in November 2017. If not, there are other wealthies who may be contemplating something different.

But after a no vote by the Seattle City Council last week on an issue critical to the creation of the arena in Sodo, the return of the NBA is nearly dead, and interest by the NHL as a winter sports alternative is not visible.

So the basketball question arises this week as to what is more difficult: Stopping Steph Curry or starting Seattle.

I vote for Seattle, because Curry will age. Seattle can go forever this way.

Unless of course, the local poodles become sled dogs, and pull this arena idea away from municipal participation.

One more irony: The president of the Golden State Warriors is Rick Welts, former Sonics ballboy and University of Washington graduate. Couldn’t find a brighter guy to ask to come home and run the show.