Thiel: Mariners win where they lost a year ago

Better talent, better information, better attitude? Something is going on with the Mariners. Nelson Cruz thinks it’s chemistry, which sounds dubious. But 21-13 is persuasive. 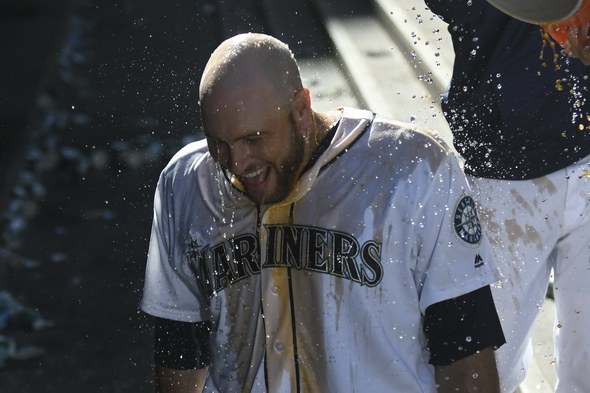 Already with five relievers on the disabled list, Mariners manager Scott Servais tied two more behind his back, declaring closer Steve Cishek and set-up guy Joel Peralta unavailable because of fatigue for the Wednesday matinee against Tampa Bay.

Because it wasn’t scary enough dangling by a thread over a volcano while holding a piano, Servais pulled his instantly collapsing starter, Taijuan Walker, after 5.2 innings after he gave up a grand slam.

Now, fellas, whoever you are, go out and win a ballgame, however long it takes.

They did, with pitchers lightly searched on baseball-reference.com — Mike Montgomery, Nick Vincent, Vidal Nuno and Steve Johnson — and a hitter, Chris Iannetta, who similarly blinks rapidly when confronted with the unfamiliar spotlight.

The 21-13 Mariners are in first place in the AL West, having won 15 of the past 21 games with a pedigree that, aside from the 3-4-5 guys, can only be seen with an electron microscope.

“The thing that’s exciting to me is how this team has come together,” Servais said after they cruised, fell, cruised, fell, and finally prevailed against the Rays with a sweep Wednesday, thanks to Iannetta’s homer in the 11th inning that produced a 6-5 win in 11 innings. “They believe in each other. In this game, we were up against it. I looked at (Robinson Cano) and I said, ‘Someone’s gotta win this game, might as well be us.'”

That is a sort of insouciance invisible on the Mariners a year ago, a group that had Cano, Nelson Cruz and Kyle Seager in the 3-4-5 spots in the lineup, but little else. It lost more one-run games than any team in the American League, in part because there were few ways to get a lead, and fewer ways to protect one.

Wednesday was exactly the kind of game they would have lost a year ago. An opponent’s erratic starter provided a 4-0 opening, but when Walker fell off the edge of earth in the sixth, which lost the lead, the 2015 Mariners would have been offensively inert. Then the bullpen would have combusted.

The 2016 Mariners are inexplicably brilliant out of the pen, the AL’s most productive relief corps despite missing five guys who were scheduled to be part of the seven-man crew. On offense, they are fourth in the AL in walks and second in home runs.

So what is it, Nelson Cruz: Better talent, better information from coaches or better attitude?

“You can mention all of that,” he said. “We definitely have more talent, with guys who can get on base and steal. The bullpen is better than last year. And we’re finding ways to score runs.”

He also mentioned what happened in spring training, when coaches devised get-acquainted sessions where individuals introduced themselves to each other and the group in ways personal as well as professional.

“It helped to get to know your teammates,” he said. “I got to know their histories, what they’ve been through. It’s like a family. You end up pulling for those guys.

“We have a chemistry. It just happens, you can’t predict it. What we did in spring is making a difference.”

If all this sounds a little familiar, that means you’re also probably a Seahawks fan. Coach Pete Carroll is all about breaking down walls between players, coaches and each other to advance the delivery of quality information.

Carroll once said his critics described his methods as “airy-fairy,” a phrase not easily forgotten. Mockable as it may be, no one can argue Carroll’s methods work, as they worked for John Wooden before him.

No one is suggesting that the Mariners are destined to repeat the success of the Seahawks. And while I respect Cruz’s view, I think chemistry in baseball is overrated because the game is such a one-on-one enterprise compared to football.

But so far, there seems to be a relative uniformity of production from one through nine in the lineup, one through five in the rotation and one through seven in the bullpen, which often allows one unit to pick up when one unit lets down.

Cano has been nearly spectacular. But over 162 games, I’ll say that the difference between 80 wins and 90 is roughly one extra hit per week from the eighth and ninth hitters. Or in Wednesday’s case, the No. 5 spot, from where Iannetta, batting .215, delivered his decider to the deepest part of the yard.

“Ideally, you don’t want to hit to center field here, but I’ll take it,” he said, beginning a small smile. “If it didn’t go, I’d have been really disappointed.”

Regarding the bigger picture, he too was citing the football-like collegiality.

“It helps with team chemistry — when we’re all working together,” he said. “That’s the way it should be. We’re winning in April and May.”

So much so that they are eight games above .500. Only one AL team, the White Sox, is doing better. That almost never happens in Seattle at this time of the season.

When a team can sweep a series with seven sets of hands tied up, I’m curious to learn more about the Safeco chemistry class.