Seattle can take two positives from a good result in Dallas: Its first road win, and banishing the specter of last season’s Western Conference playoff failure. 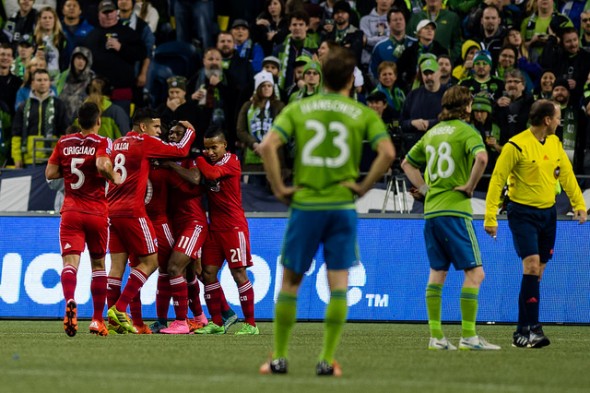 After an 0-3 start to the MLS season, the Seattle Sounders are 3-1-1 in their last five matches. They hope momentum from home wins against the Columbus Crew April 30 and San Jose May 7  continues Saturday when they travel to take on FC Dallas (7 p.m., Q13FOX) at Toyota Stadium in Frisco, TX.

The Sounders need to recapture form on the road. The Sounders are 0-2-1 in road contests, which coach Sigi Schmid thought was out of character for his squad.

Still, Schmid said that the humidity in Dallas might make things difficult.

“We’ve got to see about the weather, the heat, the humidity,” Schmid said. “Last year we were lucky, we got down there at times where it wasn’t as humid.”

The forecast calls for temperatures of 74 degrees with a 50 percent chance of rain and 58 percent humidity, which would be the best-case scenario for Seattle. If things do heat up in Frisco, Seattle will be in for an exhausting contest against a very aggressive team.

Seattle had a front-row seat to that aggression in last season’s Western Conference semifinal, losing to Dallas on penalty kicks after allowing an equalizer in stoppage time, just seconds after Chad Marshall headed in the go-ahead goal. Through both legs of the series, the Sounders struggled to keep pace with the speed and agility of Dallas players, most of whom have returned.

While Dallas’s attack is formidable, its back line might not match up well. Clint Dempsey and Jordan Morris may have success working the ball past Dallas’s center backs, who possess height but cannot match the speed of some of Seattle’s forwards. Oalex Anderson, usually playing from the bench, is almost certain to make an appearance to take advantage of his speed.

Dallas may be hampered by injuries. Captain and center back Matt Hedges required surgery to repair a torn meniscus in mid-April. Saturday’s match would be on the early end of his recovery, but his presence (and game-readiness) will play a big role in how organized Dallas remains in front of Seattle’s pressure.

Starting keeper Jesse Gonzalez was removed late in a match against Toronto FC May 7 after a collision that injured his neck. Gonzalez saved two penalties against Seattle during the shootout last year, and his backup, Chris Seitz, has been called upon only 41 times in six years with Dallas.

Schmid said that while his team wasn’t dwelling on its past failures, the match will provide an opportunity to banish the memory of the late defensive lapse that cost Seattle a trip to the Western Conference finals last year.

A road win would build confidence ahead of three road games against top-tier Eastern Conference opposition: New England, D.C. United, and the New York Red Bulls, between May 28 and June 19.