A penalty goal in the third minute was enough to keep the Sounders from points on the road in Dallas Saturday. 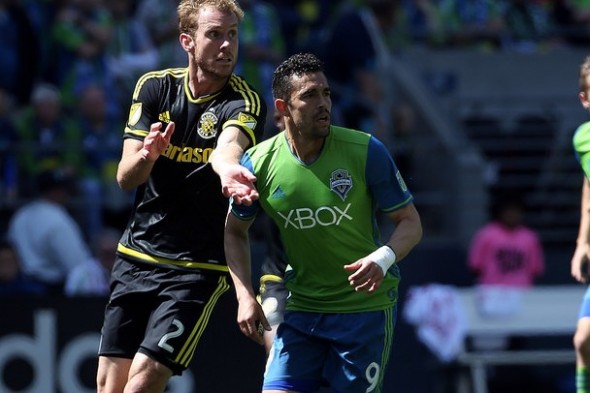 Herculez Gomez had a chance on goal in the first minute, but couldn’t convert in a road loss to Dallas. / Corky Trewin, Seattle Sounders FC

It took two minutes for the Seattle Sounders to lose Saturday’s road contest at FC Dallas. Chad Marshall was whistled for a soft foul against Walker Zimmerman inside the box, and Mauro Diaz tucked the ensuing penalty into the top corner to deny the Sounders points in the 2-0 defeat.

The goal game three minutes into play. Zimmerman went down after colliding with Marshall, and Dallas was awarded a penalty kick.

Mauro Diaz stepped up to the ball and blasted it into the top shelf past Stefan Frei to notch the game-winner.

Seattle fought for 78 minutes to get back into the match, but couldn’t generate any chances that seriously threatened Dallas’s back line. Rookie Jordan Morris had Seattle’s best chance, breaking free for a header in the 19th minute, but sent the ball straight to goaltender Chris Seitz.

Sigi Schmid said that the Sounders were too generous passing the ball in the final third.

“We created opportunities, but we’ve got to be more decisive there,” Schmid said.  “We’re crossing balls when we have pretty goods shooting angles, we’ve got to make them take us down in the box and get penalties.”

Seattle finished with three shots on goal for 90 minutes of work, and was thwarted by Dallas’s defense when the Sounders carried the ball into the alleys outside the penalty area. Seattle controlled the ball for most of the match, but couldn’t produce in the clutch.

Michael Barrios grabbed an insurance goal in the 80th minute. Sprung by former Sounder Mauro Rosales, Barrios burned Brad Evans and shot across the face of the net to guarantee the win.

Frei was a bright spot. Credited for two saves, Frei came off his line early and often to clear away dangerous through balls from the Dallas midfield and prevent one-on-one opportunities.

Herculez Gomez, who fanned a low-angle shot across the net 40 seconds into the match, lamented his miss.

“If I finish the first one, this is a different game,” Gomez said. “I unfortunately didn’t get it on frame, I’ll fall on the blame on this one. That’s on me.”

Seattle has one point from four road matches. Captain Brad Evans was at a loss to explain the poor road record.

“If I had the answer, we’d be getting results,” Evans said. “We created chances, we kept possession in their half. We’ve just got to bury our chances when we get them. At the back, we’ve got to keep it back and play to zero away from home and get out of here with a point.”

Seattle came to Dallas hoping to banish the specter of its loss in the Western Conference semifinals last season. It leaves pondering how to make the most of scoring opportunities, and still seeking a win on the road.