The investigation of alleged WIAA rules violations by Bellevue High School’s football program takes another step when the school district offers its findings to Kingco Conference. 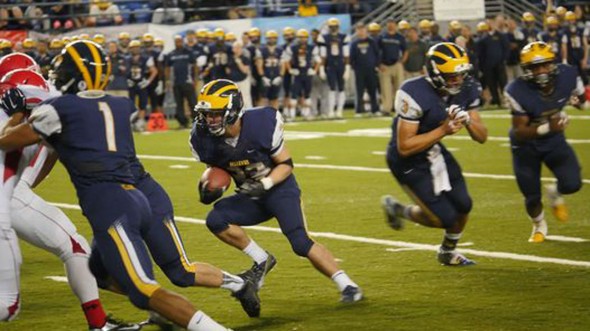 The Bellevue School District will provide its findings on the Wolverines football program to the Kingco Conference. / King5.com

The Bellevue School District is preparing to present the findings of its supplemental investigation into rules violations by the Bellevue High School football program to the Kingco Conference, which will advance the disciplinary process against the program. The district expects to deliver the report next week.

An earlier version of this story misstated the hearing date as Monday. Kingco updated its website Friday with the change in its calendar.

The district’s investigation came about as a consequence of an independent, year-long WIAA investigation released April 26. The report, conducted by former federal prosecutors, found that the Bellevue School District, the football team’s coaching staff and its boosters were complicit in violations, including the use of fake addresses by players to gain eligibility, payments from coaches to players and payments to coaches from boosters.

Also cited were unusually close ties between the program and The Academic Institute, a private alternative school in Bellevue that former educators labeled a “diploma mill” that helped keep academically under-performing players on the field.

In the wake of the report, Bellevue boosters and parents have gone on the attack, claiming that the report had a racial agenda in primarily targeting football players of color and personally harassed players and their families.

The Bellevue School District superintendent, Dr. Tim Mills, released a statement the same day the report went public. While Mills apologized to those who felt personally hurt or racially targeted by the investigation, he said that it “required information that requires immediate attention.”

Mills himself was named by the investigation’s report, which claimed that he had been made aware of rules violations by Bellevue when he became superintendent in 2012, but did not take action to investigate.

The Bellevue School District’s investigation may allow officials to save face after Westinghouse and Blackstone roundly condemned BSD in the report, saying that the district actively impeded the course of its investigation and had spent years ignoring or helping obfuscate reports of violations.

The district drafted a resolution May 4, saying that there was “evidence of misconduct and insufficient oversight” in the Bellevue football program.

Bellevue principal Scott Powers announced he was leaving the school to accept the principal’s job at Sammamish High School. Powers was named in the report, which stated that he had incorrectly informed a teacher that the teacher must be represented by a school district lawyer while speaking to the WIAA investigators.

Powers denied that the move to Sammamish was in any way associated with the scrutiny of Bellevue’s football program.

The Bellevue Wolverines Football Club, the booster organization, was also criticized for its role in making large payments to coaching staff. The report said that, according to the club’s tax records, it had paid $588,568 to coaches from 2002 to 2012. WIAA rules state that payments by booster organization to coaches greater than $500 must be approved by the district, but none of the payments to head coach Butch Goncharoff or his assistants were reported.

The boosters defended the payments, saying that while they paid Goncharoff $60,000 a year, they did so “for a whole host of things,” according to booster club president and former Microsoft CFO John Connors. Among those things were summer football camps, youth programs and non-football events. According to the boosters, since the payments were made outside of the football season. The supplemental income to Goncharoff’s $9,000 district stipend for a head coach position does not fall under WIAA purview.

The booster club payments also raised concerns that Bellevue may have run afoul of Title IX requirements ensuring equality between athletic programs for both genders.

Connors told the Seattle Times that “(the program) expects to be fully vindicated at the conclusion of this process.”

The school district now has the initiative for disciplinary action against the Wolverines. Once the Kingco hearing board, comprised of officials throughout the league, receives the BSD findings next week, it will make recommendations to the SeaKing District 2 board,  which is comprised of 15 representatives of public schools and private schools and is one of nine districts that comprise the WIAA. It can affirm, reject or alter the Kingco decisions.

Sanctions can be imposed by the district or WIAA, after which the football program has the option to appeal.

In the WIAA handbook, violations are divided into three categories.

Bellevue has won 11 state titles in 16 years. Some may be in jeopardy of vacation if the district decides to impose sanctions. Final sanctions may not be imposed until the Kingco board and SeaKing have a chance to present findings to the WIAA board of executive directors in early June.

The outcome of the WIAA investigation is almost certain to spark an overhaul in the language of state rules.