The division-leading Mariners finished a sweep of the Reds in Cincinnati Sunday and went 5-1 on the road trip. The pending home stand has three sub-.500 teams. 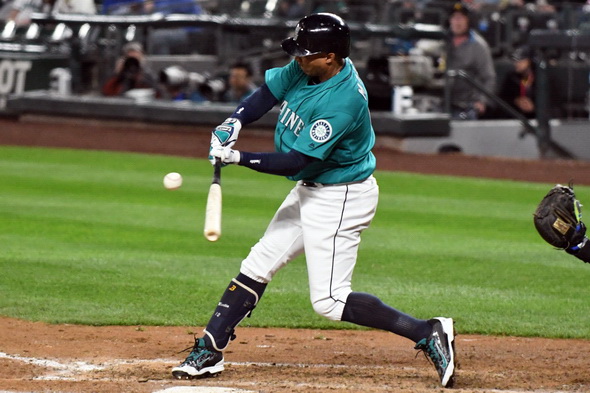 The Mariners rallied from 3-0 and 4-2 deficits to complete a sweep of the Cincinnati Reds Sunday at the Great American Ballpark with a 5-4 victory. Down 3-1, Seattle (26-17) scored three times in the fifth, capping the surge with a Steve Clevenger RBI single, and finished its road trip 5-1 while extending a winning streak to four (box). The Mariners also maintained a 1.5-game margin over Texas (9-2 winner over Houston) in the AL West.

Although dinged for three first-inning runs, starter Wade Miley regrouped and notched his staff-leading fifth win in his past six decisions. The Mariners won in comeback fashion for the 10th time and ran their road record to 18-7, best in the American League.

After falling in a 4-2 hole after four, CF Leonys Martin started the fifth with a bunt single.  LF Nori Aoki followed with a single. 2B Robinson Cano’s sacrifice fly scored Martin. After RF Nelson Cruz walked, 3B Kyle Seager’s single scored Aoki. Clevenger, getting the start behind the plate for Chris Iannetta, delivered the go-ahead single to score Cruz for a 5-4 lead.

The Mariners had 12 hits, including four by Martin from the leadoff spot. Martin has a six-game hitting streak and has reached base in 16 of his past 17 contests. Martin reached 11 times during the six-game swing through Baltimore and Cincinnati while batting .550 . . . Cano drove in a pair of runs, his 38th and 39th of the season. He leads the AL. Cano has hit safely in 20 of 25 road games . . . Aoki and SS Shawn O’Malley, subbing for the injured Ketel Marte, each had two hits . . . The Mariners went 3-for-12 with runners in scoring position.

Miley (5-2, 4.50), who singled in the third and scored on a Cano single, allowed four runs on eight hits, with six strikeouts and one walk in six innings. Miley allowed one home run (Adam Duvall) before giving way to relievers Nick Vincent and Joaquin Benoit, who combined for two hitless innings . . . Closer Steve Cishek worked a perfect ninth for his 12th save, striking out Duvall and retiring Ramon Cabrera and Tucker Barnhart on fly balls.

“We are riding a Leonys (Martin) wave right now. He’s on a really good roll. He’s a dynamic player and it was a good fit for him today at the top of the lineup. Wade Miley had a tough first inning, but hung in there and made a good adjustment. Then our bullpen was outstanding. The entire road trip was really good, especially coming off a rough series at home (swept by Anaheim). We had a lot of good at-bats.” — Mariners manager Scott Servais

The Mariners and Oakland Athletics, who were swept at home in a four-game series ending Sunday by the Yankees for the first time since 1979, and have 12 players on the disabled list, begin a three-game series at Safeco Field at 7:10 p.m Monday. RHP Taijuan Walker (2-3, 2.95) will throw for Seattle opposite LHP Rich Hill (6-3, 2.54).