Catchers Chris Iannetta and Steve Clevenger, signed by GM Jerry Dipoto over the winter, have provided the Mariners with an offensive uptick until Mike Zunino develops into a hitter. 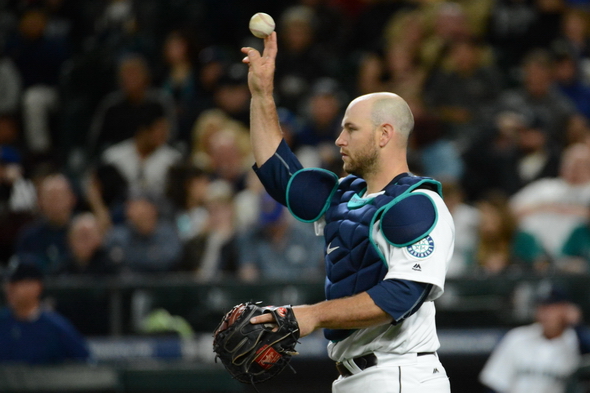 Chris Iannetta is proving to be a valuable addition to the Mariners. / Alan Chitlik, Sportspress Northwest

The Mariners never held a Humberto Quintero Bobblehead Night at Safeco Field. Yorvit Torrealba, Guillermo Quiroz and Eliezer Alfonzo passed through the park similarly dismissed, as did most of the 22 catchers in the 10 years that followed Dan Wilson’s retirement after the 2005 season. Of the 22, four had opportunities to be the next big thing, but weren’t.

GM Bill Bavasi spent the third overall pick in the 2005 draft on USC’s Jeff Clement, ignoring Troy Tulowitzki and Andrew McCutcheon, figuring that after some seasoning Clement would become Wilson’s long-term replacement. While Bavasi waited on Clement, he signed Kenji Johhima to a three-year, $16.5 million deal out of Japan as his starting catcher.

Johjima hit .292 with 18 home runs in 144 games as a rookie in 2006, but declined offensively thereafter and never did learn enough English to communicate with pitchers. Undaunted by that wrinkle, Bavasi extended Johjima for three years in 2008, when Clement appeared ready to bust out.

Good as he’d been at USC, Clement wasn’t a major league catcher, or a major league anything. Jack Zduriencik, Bavasi’s replacement, dispatched Clement to Pittsburgh July 25, 2009 (he has been out of baseball since 2013), three months before Johjima decided he’d had enough of Sodo and returned to Japan.

Even before Montero proved the reports wrong, Zduriencik selected Mike Zunino in the first round of the 2012 draft. Due to Montero’s inability to lay off PEDs and peppermint ice cream, Zduriencik was forced to rush Zunino to the big leagues in 2013 where, despite periodic power, he lost his starting job ast year after one of the worst offensive years by a catcher (.174/.230/.300) in modern history.

Zduriencik nearly ruined Zunino’s career. But Zduriencik’s replacement, Jerry Dipoto, may have saved it by ordering Zunino to AAA this season for a reboot after hiring the 23rd and 24th catchers since Dan Wilson, veterans Chris Iannetta, 33, and Steve Clevenger, 30.

They aren’t the most productive catchers Seattle has employed since Wilson retired, but are upgrades over 2015 when Zunino and Jesus Sucre collaborated for a .464 OPS, worst in franchise history by a catching platoon. Seattle’s primary catchers since 2009, ranked by OPS:

“This move improves our depth at a critical position,” Dipoto after signing Iannetta as a free agent last November. “Chris provides us with a solid veteran presence behind the plate, as well as an experienced major league hitter with strong on-base skills who will lengthen our lineup.”

Where Zunino was .174 with a .230 OBP last year, Iannetta and Clevenger have contributed offensively in Seattle’s 28-18 start.

Iannetta, who reached base in his first five plate appearances this season, went 3-for-3 with a home run in a 7-1 victory at Yankee Stadium April 15, and had a walk-off home run against Tampa Bay May 11. Clevenger has multiple hits in three of his 11 starts, hit a two-run, go-ahead homer April 21 at Cleveland and delivered the game-winning RBI May 22 at Cincinnati.

Iannetta and Clevenger have plugged a serious hole and Dipoto didn’t spend much (relatively speaking) to sign them, inking Iannetta one a one-year deal for $4.25 million (plus incentives) with a team option for 2017. Clevenger also signed for one year at $516,000.

Their combined production will give Zunino, a good defensive catcher, up to a full year in AAA to develop his offensive skills. So far so good: Zunino has hit .293 with 11 home runs, 34 RBIs and a .941 OPS in 41 games with the Rainiers. If the Mariners can convert him into a .230 hitter or so at the major league level, they’d have a valuable asset.

The key is to give the 25-year-old Zunino time to develop. Iannetta and Clevenger are integral to that plan, and both have so far validated Dipoto’s investment.