Felix Hernandez was clobbered in a five-run third by the sick man of the American League, the Minnesota Twins, who ran away with an easy 7-2 win in front of a big crowd at Safeco. 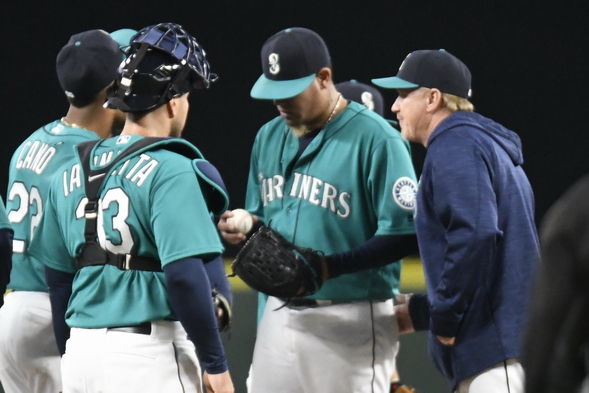 Felix Hernandez let down a spirited crowd of 40,921 at Safeco Field Friday night when the Mariners’ ace struggled against one of the worst offenses in baseball. The lowly Twins, who entered the game tied with Atlanta for baseball’s worst record (12-34), beat Hernandez  (box) and the Mariners 7-2.

Things were already getting out of hand before former Astros prospect Robbie Grossman stepped up with the bases loaded in the top of the third. Grossman’s one-out double into the corner scored two runs – a third would have scored had the ball not gone out of play – as the Twins opened up a 6-1 lead. Grossman’s double was Minnesota’s third of the inning and the fourth extra-base hit given up by Hernandez over the first three innings.

Hernandez was due for a dud. After Miguel Sano opened the second inning with a solo homer to tie the score 1-1, the wheels started to come off in the third. Hernandez allowed five hits, including three doubles, during a five-run inning. Hernandez recovered and made it through six innings, but his line was not pretty: Eight hits, six earned runs, one walk and six strikeouts.

Reliever Joel Peralta gave up a home run before Steve Johnson struck out five of the seven batters he faced in the eighth and ninth innings.

RF Franklin Gutierrez had a solo homer in the first, but that was one of only five hits for the Mariners. Rookie left-hander Pat Dean, in his second career start, had his way. 2B Robinson Cano legged out his first triple since July, eventually scoring the second run on an RBI single from 1B Dae-Ho Lee.

“Obviously, he’s a great pitcher and he’s pitched a lot of great ball games over the years. But tonight wasn’t one of them.” – Manager Scott Servais on Hernandez.

1B Adam Lind, hero of Wednesday’s win after a 4-for-4 performance that included two home runs and six RBIs, did not play because the Mariners were facing a left-handed starter. Lind typically starts against right-handers, whil Lee was in the lineup Friday as part of Seattle’s platoon . . . Twins 3B Trevor Plouffe came out after three innings because of a sprained right MCL . . . In three consecutive home series against struggling teams – Angels, A’s and Twins — the Mariners are 0-3 in opening games.

LHP Wade Miley (5-2, 4.50 ERA) has experienced quite a turnaround since some early struggles in his first season with the Mariners, to the point that Seattle fans should feel pretty good about Seattle’s chances every time he takes the mound. Miley goes at 7:10 p.m. Saturday against struggling RHP Phil Hughes, who has had a rough May. Hughes brings in a 1-7 record and 5.55 ERA. The Mariners are in a stretch of facing four starting pitchers with a combined record of 2-14.