For the third time this season, the Mariners were swept at home by a lesser team, this time the Twins. The way they did it was startling — beating up the starting pitching. 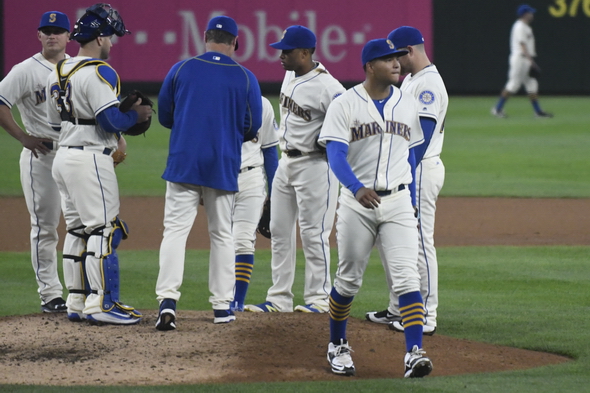 Taijuan Walker was pulled from the game in in the fifth inning when he gave up three runs. / Alan Chitlik, Sportspress Northwest

By now, after being swept at home a third time by a lesser team this young season, Mariners fans figure to have built up a callous regarding these things. But no, each time it happens, the wound re-opens to accept 40 years of salty despair from the jaded.

That’s because wailing and lamenting is emotionally a more rewarding action than a shrug followed by the statement,  “That’s baseball.”

But for a team that has MLB’s best road record, there is no other worthy explanation. Certainly not from Scott Servais. When asked how the Mariners could have been swept three games at home by the lowly Minnesota Twins, a deed done in mid-May by the Angels and early April by the Athletics, the Mariners manager adopted the familiar shoulder hunch.

But they didn’t pitch.

That’s where the problem advances beyond injuries and shrugs.

To the Twins, of all teams. They came into the series at 12-34, tied with Atlanta for baseball’s worst record. Minnesota entered the game 26th in OPS but scored 18 runs in the series, which included eight home runs into the legendary marine layer that’s a tradition of every sodden Memorial Day weekend here. They have won 10 of the past 13 against the Mariners.

Sunday, Walker said after another inadequate start that he went away from his fastball and tried to out-think hitters with off-speed pitches. Even though he’s made the same mistake before, he did it again.

“I was trying to sneak it by them,” he said. “I really have to establish the fastball.

“If I kept a couple of balls in the park, it’s a different story.”

If the Mariners hadn’t been over-amped on the basepaths Saturday, they might have avoided a historic, game-ending double play accomplished without a batted ball in play.

Counting a sixth-inning failure at the plate by Seth Smith, the Mariners Saturday were thrown out for the cycle in a 6-5 loss. That’s hard to do.

The sweep followed a 5-1 road trip that pushed the Mariners 10 games over .500, a height unseen by the franchise since 2003. To come home and fail against the squad from Lake Wobegon is like burning up the turkey and dressing at Thanksgiving and heading to Pizza Hut.

As long-timers know, Memorial Day weekend is usually the time when the Mariners bid adieu to pennant contention. Typically, they are a half-dozen or more games under .500 and the various managers are speaking bravely about getting this player back, or that player hot, or suggesting it’s still early. Then the bosses panic and trade away a good catcher (remember the six-game career last season of Wellington Castillo?) for magic beans, and the whole thing devolves into extended spring training.

Despite the sweep, the Mariners, at 28-21, are still way above expectations traditional with this club. And they have demonstrated resilience after bad play that should be the hallmark of a veteran-heavy team that was baseball’s oldest at the start of the season.

They know better than to panic. New general manager Jerry Dipoto has preached to the organization about staying cool in the heat.

But if you feel compelled to work your worry beads into a pulp, feel free to have a sweat over the starting pitching.

In his age-30 season with a lot of hard MLB miles on his arm, Hernandez is having more frequent bad innings. He’s still good pitcher, but sustaining excellence from game to game and inning to inning is harder than at his mid-career peak.

Walker, next in the line of succession to be king, still hasn’t learned to pitch intelligently. Presumably, that will dissipate with experience. Whether that happens this season is anyone’s guess.

Miley and Nathan Karns have exceeded expectations but are still American League newbies who are subject to improved scouting reports. Hisashi Iwakuma, 35, has pitched 62.1 innings in 10 starts, nearly identical to Hernandez’s modest durability. Over the course of a season, the failure of starters to get deep into games is a bullpen-burner.

The return of Martin and Marte create an above-average offensive team. Whether the rotation keeps up is the question for the rest of the season.

The Mariners have the 20-31 Padres for four games, two here Monday and Tuesday, then two more in San Diego. I’d call them the Twins of the National League, but I don’t want to spoil the rest of the weekend for Mariners fans.

Perhaps the off-season trade with Texas for Martin became a little better Sunday. INF Patrick Kivlehan was re-acquired from the Rangers for a player to chosen later or cash. To make room on the 40-man roster, relief pitcher Evan Scribner, who hasn’t pitched this season, was transferred to the 60-day disabled list (lat strain).

Kivlehan was released last week by the Rangers after hitting .184 with 17 runs scored, eight doubles, one home run, 16 RBIs and 11 walks in 36 games with AAA Round Rock this season. He played first base (16 GS), third base (16) and designated hitter (4).

Kivlehan was the player to be chosen later from the Nov. 16 trade when the Mariners acquired Martin and RHP Anthony Bass from Texas for RHP Tom Wilhelmsen and OF James Jones. Wilhelmsen and Jones are at Round Rock.

Kivlehan was a fourth-round pick by Seattle in the 2012 draft out of Rutgers. If the return helps him regain his early career flourish, the Mariners might have pulled off a sneaky-sneaky.