After three consecutive losses to the Minnesota Twins, the Mariners erupted for nine runs after the fifth inning and blasted the San Diego Padres 9-3 Sunday at Safeco Field. 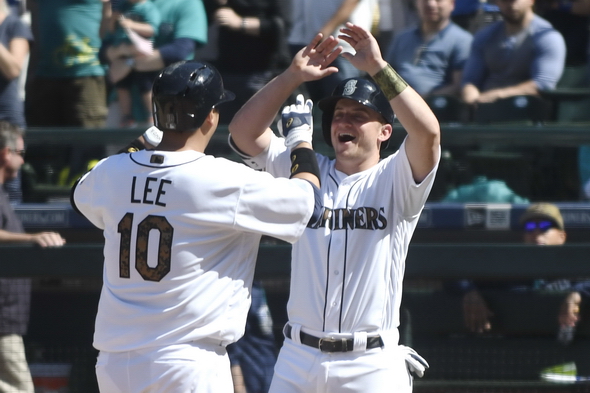 Blanked through five innings while collecting only two hits, the Mariners erupted for four runs in the sixth and five in the eighth to crush the San Diego Padres 9-3 Monday afternoon, snapping a three-game losing streak (box). Nathan Karns threw 6.2 largely effective innings, and 3B Kyle Seager (two-run) and 1B Dae-Ho Lee (three-run) both had long balls as Seattle rallied from a 2-0 deficit to improve to 29-21.

Andrew Cashner, retiring 11 in a row at one juncture, shackled the Mariners through five innings before Seattle scored four runs on three hits in the sixth, the key blow Seager’s ninth home run with Nelson Cruz aboard for a 4-2 lead. In the eighth, Adam Lind added a two-run single and Lee unloaded a three-run bomb, his seventh homer.

After SS Shawn O’Malley opened the bottom sixth by grounding out, CF Nori Aoki reached on a catcher’s interference. LF Seth Smith followed with an RBI double, then Cruz singled to center, scoring Aoki to make it 2-2. That set up Seager’s go-ahead homer.

Karns (5-1, 3.43) worked 6.2 innings, allowing two runs on eight hits with six strikeouts and a walk. He improved to 5-1 and his winning percentage (.833) is the best in Seattle’s rotation. He also tied Wade Miley (5-2) for the team lead in wins. Mariners are 8-2 in Karns’ 10 starts  . . . Steve Johnson, Joaquin Benoit and Joel Peralta collectively worked 2.1 innings of scoreless relief, allowing one hit with four strikeouts and one walk. Johnson has not allowed a run in his past 10.1 innings.

“(Nathan) Karns stepped up and gave us something we really needed today, a quality start. He kept us close enough, and it was one of the best games he’s pitched for us all year. He knew he needed to get deep into the game and he was great. He’s got a good arm, a good fastball, and we didn’t see many 3-2 counts from him. It was a nice day for us.” — Mariners manager Scott Servais

“Cashner threw the ball really well and kept us off balance early, but fortunately we were able to get some momentum in that one inning (sixth). We certainly didn’t lose confidence due to the weekend (sweep by the Twins).” — Seager

“I feel as long as we keep it close we’ll get the big knock and today was a prime example. Today, I had command of the strike zone with only one walk. I just try to go out there and pound the strike zone and let my defense play strong behind me” — Karns

The second of two between the teams at Safeco Field Tuesday is at 12:40 p.m. RHP Hisashi Iwakuma (3-4, 4.33) will throw for Seattle opposite RHP James Shields (2-6, 3.06). The clubs will play two more in San Diego Wednesday and Thursday.