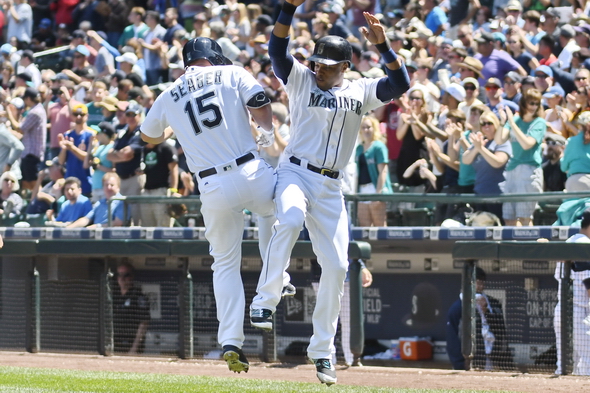 The home run party was on at Safeco Field Tuesday. Kyle Seager had one of the Mariners’ five. / Alan Chitlik, Sportspress Northwest

The Mariners pounded five home runs, including a pair by Seth Smith, and clobbered the San Diego Padres 16-4 at Safeco Field Tuesday afternoon. Hisashi Iwakuma had a 12-0 lead before giving up his first hit and a 16-0 advantage before the Padres touched him for three runs in the sixth (box). The Mariners (30-21) outscored San Diego 25-7 in the two-game series.

Shields recorded two easy outs in the second, but quickly unraveled, allowing singles to SS Luis Sardinas and CF Nori Aoki and a walk to LF Seth Smith. Shields forced in a run by walking 2B Robinson Cano, DH Nelson Cruz followed with a two-run single and 3B Kyle Seager launched a three-run homer for a 7-0 lead.

Seattle scored multiple runs in four of the first five innings, including 10 off San Diego starter James Shields in 2.2 innings. The 16 runs are a season high, eclipsing the 13 the Mariners tallied against Oakland in a 13-3 win May 25. Seattle has scored 16 runs in a game four times at Safeco Field (since mid-1999), the last time before Tuesday on April 22, 2002 (16-5 win over the Angels). The Mariners have 25 multi-homer games this season, most in the majors.

Smith went 2-for-4, walked once, scored three times and drove in four runs. Seager, who had an RBI single in the first, had three hits and four RBIs, jacking his batting average to .274 after starting May with a .215 mark. Gutierrez extended his hitting streak to seven games. Lind went 2-for-5 and has hit safely in 10 consecutive games against San Diego. Cano was the only Mariner starter without a hit, but he walked three times and scored twice.

Iwakuma (4-4, 4.41) cruised through five innings before losing his command in the sixth, when he allowed three runs, all on homers. He left after seven innings, having yielded four runs on five hits with five strikeouts and no walks. Iwakuma has won his past three starts . . . Vidal Nuno and Mike Montgomery combined for two innings of scoreless relief.

“It’s a lot of fun when guys are stringing good at-bats together. Shields has a lot of good pitches, but he left some balls up over the plate and we sere able to get to them today. The good thing about this team is that no one is going to give up an at-bat” — Smith

The Mariners finished the eight-game home stand 4-4 despite getting swept by the Minnesota Twins last weekend . . . Mariners have won eight of their past 12, are 5-0 in interleague play and 12-4-1 in series this season . . . This marks the first time since July 3, 2011-June 8, 2012 that Seattle has won five consecutive interleague contests . . . SS Ketel Marte (sprained left thumb) is on a rehab assignment with the AAA Tacoma Rainiers. Barring a setback, he is expected to rejoin the Mariners when they return to Safeco Field June 6.

The Mariners and Padres will play the first of two in San Diego Wednesday with a first pitch at 7:10 p.m., PT. RHP Felix Hernandez (4-4, 2.86) will throw for the Mariners opposite LHP Christian Friedrich (1-1, 1.65). Following the San Diego series, the Mariners will play three in Texas against the Rangers.