The Mariners placed RHP Felix Hernandez on the 15-day disabled list and brought up James Paxton from AAA Tacoma to start Wednesday against San Diego. 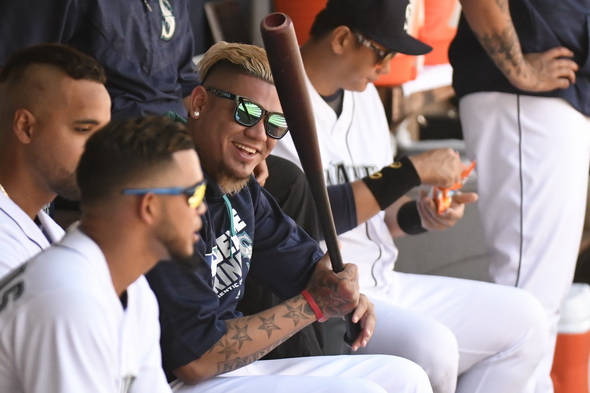 Tuesday in the Mariners dugout, Felix Hernandez looked like he was getting ready to bat in a National League park. / Alan Chitlik, Sportspress Northwest

Felix Hernandez, decked out in an aqua jacket almost as garish as the giant gold chain dangling from his neck, was in jovial mood when he arrived at Safeco Field Tuesday morning.

Hernandez’s mood soured later in the day when his strained right calf forced the Mariners to place him on the 15-day disabled list Wednesday morning, retroactive to May 28.

James Paxton was recalled from Class AAA Tacoma to start Wednesday night in Hernandez’s spot in San Diego. Paxton had been scheduled to start Tuesday night in Tacoma, but was held out of the game after concern developed over Hernandez.

Hernandez did not appear to be injured and did not mention anything about a health issue after he was shelled by light-hitting Minnesota Friday in his most recent start. Manager Scott Servais said there was nothing wrong with Hernandez’s arsenal of pitches against the Twins, but Servais described Hernandez’s pitch location that game as “horrendous.”

Pitch location and injuries have been recurring issues with Paxton, a hard-throwing southpaw. He went 4-3 with a 3.97 earned run average in 10 games (all starts) with Tacoma this year after splitting the previous three seasons between Seattle and the minors. Paxton’s won-loss record and ERA grew worse each year in Seattle, bottoming out at 3-4 and 3.90 last season in 13 games (all starts).

Cano lagging in votes: Mariners 2B Robinson Cano is enjoying one of the greatest starts in his splendid 12-year career in the major leagues, but fans outside of Seattle don’t seem overly impressed.

In the latest count of fan votes for the All-Star Game, Cano ranks a distant third among AL second baseman with 354,415. Houston’s Jose Altuve leads at 624,218, followed by Kansas City’s Omar Infante at 473,205.

Cano’s streak of 29 consecutive games reaching base safely is the longest active run in the majors. Servais said numbers alone don’t tell the whole story about Cano’s value to the Mariners.

“How he goes about his business every day; the energy he brings for a veteran player; it screams that this guy really wants to win,” Servais said.

Odds improving: Las Vegas is warming up to the idea of the Mariners playing in their first World Series this year.

Wednesday the Bovada.com gambling site upgraded odds to 16-1 that come October, the Mariners will no longer be the only active major league franchise without a World Series appearance. A month ago, Bovada gave 22-1 odds on that happening.

The Mariners are tied for eighth with Toronto and the Los Angeles Dodgers on Bovada’s list of World Series favorites. The Chicago Cubs are 15-4 favorites. They’re followed by Boston and San Francisco at 8-1, Washington at 10-1 and the New York Mets and Texas at 12-1 and defending champion Kansas City at 14-1.

Seattle and Kansas City are tied for third (7-1) for odds to win the American League championship. Boston leads at 17-4. Texas is next at 5-1.

Cano (7-1) is No. 3 for the league’s Most Valuable Player award, and Cruz (12-1) is tied for seventh. Manny Machado of Baltimore and Mike Trout of the Los Angeles Angels are the co-favorites at 3-1.

In the Cy Young Award race for the AL’s best pitcher, Hernandez and Oakland’s Rich Hill are tied for second (15-2) behind Chris Sale (2-3) of the Chicago White Sox.

Road attire: Servais asked players to travel to San Diego wearing attire that reflected their upbringing. The manager, a Wisconsin native, led by example by donning a green-and-yellow wardrobe topped off – literally – by a cheesehead hat resembling a giant piece of Swiss cheese.

“We’ve got guys from six different countries,” Servais said. “Very diverse. Let’s have fun with it.”

A graveyard?: Safeco Field has a reputation as a graveyard for home run hitters, but the Mariners lead the majors with 77 homers after blasting a season-high five long bombs in Tuesday’s 16-4 romp over San Diego. The Padres belted three homers, but only after falling behind 16-0 in the fifth inning. Hisashi Iwakuma (4-4) gave up the three homers after retiring the first 12 batters he faced.

Seth Smith led the Seattle bat attack with two against his former team. Adam Lind capped Seattle’s homer binge with two-run shot in the fifth. Lind has 18 RBIs in his past 12 games after driving in just five in his first 28.

Lind, acquired in a December trade with Milwaukee, said the ball carries just fine on warm days at Safeco and other West Coast ballparks.

Players pitching: There were plenty of smiles and laughter in the eighth inning Tuesday when the Padres saved their bullpen by sending position players Christian Bethancourt and Alexi Amarista to the mound. They didn’t give up any runs, but it wasn’t pretty.

Bethancourt, who had already played catcher and left field, replaced Amarista at second base with two out after loading the bases on two walks and a hit batter. Bethancourt threw a variety of pitches clocked between 96 and (blush) 53 mph.

Veteran San Diego starter James Shields gave up 10 runs – all earned, and all with two out – in 2.2 innings. Already the subject of trade rumors, Shields made no excuses.

“Just kind of one of those days,” Shields said after falling to 2-7. “That’s a good hitting team over there. I didn’t do my job today.”

High on Walker: Mariners pitcher Taijuan Walker has experienced his share of rough outings after a fast start, but Servais remains a big supporter of the 23-year-old right-hander. Walker is 0-5 since his 2-0 start.

“The upside on this player is phenomenal. He has that chance to be that No. 1 starter . . . there’s no doubt he’s got the stuff.

“He’s athletic enough. He’s really smart. He cares. He works his tail off.”

Marte update: Ketel Marte, Seattle’s starting shortstop before he injured his left thumb May 21 at Cincinnati, went 0-for-5 Tuesday night in his first rehab outing with Tacoma. Servais said the Mariners hope to activate Marte when the club returns home Monday against Cleveland.