In a comeback for the books, the Mariners fell into a 12-2 hole in the fifth inning before rallying for an improbable 16-13 win at San Diego Thursday, including seven singles in a row. 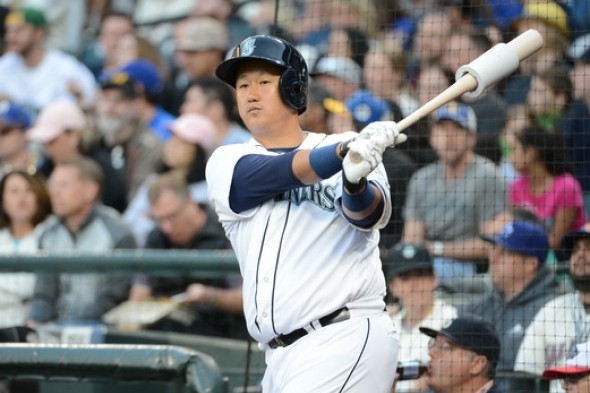 The Mariners could play another 40 years and not repeat the feat they pulled off Thursday night at Petco Park in San Diego. Buried in a 12-2 hole after five innings, Seattle rallied for five runs in the sixth inning and nine more in the seventh and shocked the Padres 16-13 for the greatest comeback win in franchise history. The immediate benefit: Seattle (31-22) moved into a tie with Texas for first place in the AL West (box).

The 10-run deficit overcome by the Mariners eclipsed the record of eight, set April 15, 1996, when Seattle fell into a 9-1 abyss against the Anaheim Angels and rallied to win 11-10.

Such a dramatic reversal of fortune seemed next-to-impossible after the Padres clobbered  starter Wade Miley for 12 hits and nine earned runs in 4.2 innings, then torched reliever Mike Montgomery for three more and a 12-2 lead. The beleaguered Miley even balked in a run, leaving little doubt that this was not Seattle’s night. Or so it seemed.

But the Mariners’ response began with five in the sixth, highlighted by 1B Dae-Ho Lee’s three-run, pinch homer,  merely a prelude to one of the most astonishing innings, the sixth, in franchise history.

The most astonishing aspects: The Mariners saw 66 — SIXTY-SIX — pitches in the inning and all nine runs crossed the plate with two outs. Aoki had a two-hit inning as the Mariners won for the first time in 40 years when allowing as many as 13 runs in a game.

“I’ve never been a part of anything like that,” said Seager, who drove in a season-high five runs. “It was incredible. The guys coming off the bench did an amazing job.”

The reserves, led by Lee, combined for seven RBIs.

“That’s just incredible the way we streamed those hits together in the seventh inning,” added Seager. “That was crazy. I’ll remember this one for a long time.”

So will closer Steve Cishek, who improbably collected his 13th save in a game the Mariners trailed 12-2.

“The Dae-Ho Lee home run in the sixth (off Brad Hand) gave us the momentum. After that, it was just hit after hit after hit,” said manager Scott Servais. “What can you say? The guys don’t quit, they keep battling and going, going and going. Everybody was involved in this one, even Leonys Martin (on the disabled list), who kept cheering us on in the dugout. I’ve been around a lot of big league games but I’ve never seen a 10-run comeback. I can’t say enough about our guys.”

This marked the first 10-run comeback in the majors since the Oakland Athletics rallied for a 14-13 win over the Minnesota Twins July 20, 2009.

The game was reminiscent — in reverse — of one the Mariners played in Cleveland Aug. 5, 2001. That night, Seattle, en route to 116 wins, took a 12-0 lead into the fourth inning and wound up losing 15-14 in 11 innings — the biggest giveaway in franchise history.

The Mariners collected 16 hits, including a season-high eight in the seventh inning (previous high this year was seven May 25 against Oakland). Lee was 3-for-3 with four RBIs. He homered for the eighth time this season and for the second time as a pinch hitter (he has Seattle’s only two pinch homers). . . Seager went 3-for-5 and scored twice.

San Diego’s Jon Jay had a career-high five-hit game (5-for-6), one night after going 4-for-6 in San Diego’s 14-6 victory. Jay doubled and had four singles . . . The Padres sent 13 men to the plate in the fifth, scoring seven times.

Seeking his team-leading sixth win, Miley had nothing, but avoided a loss. He struck out two and walked two among his 94 pitches. Miley’s start was his worst this year, eclipsing the seven-hit, five-run meltdown he experienced April 6 at Texas . . . Montgomery retired only one batter with his 17 pitches, allowing three earned runs on four hits and a walk . . . Cody Martin, summoned from AAA Tacoma Thursday after the Mariners designated Joel Peralta for assignment, received credit for the win after pitching an inning of scoreless relief.

The Mariners faced three pitchers who previously pitched for Seattle — Brandon Maurer, Matt Thornton and Fernando Rodney. The Mariners got five runs off Maurer and Thornton and Maurer took the loss.

The Mariners took three of four from San Diego this season and improved to 6-1 in interleague play . . . Mariners have won nine of their past 14 and improved to 19-8 on the road . . . Seattle is 12-4-2 in overall series this season and 7-0-2 in road series . . . Servais said Thursday that James Paxton will get another start Monday in place of Felix Hernandez when the Mariners return to Safeco Field to face the Cleveland Indians. The Padres rocked Paxton, just summoned from Tacoma, for 10 hits and eight runs Wednesday night.

The Mariners begin a three-game series at Texas Friday with a first pitch at 5:05 p.m. RHP Taijuan Walker (2-5, 3.31) will throw for Seattle opposite RHP Yu Darvish (1-0, 1.80), who missed all of last season with an injury. Following the weekend series, the Mariners will return to Safeco Field Monday for four against the Indians.