A special edition of the Copa America tournament, to celebrate 100 years of South American soccer history, begins Friday. The tournament is receiving praise and criticism. 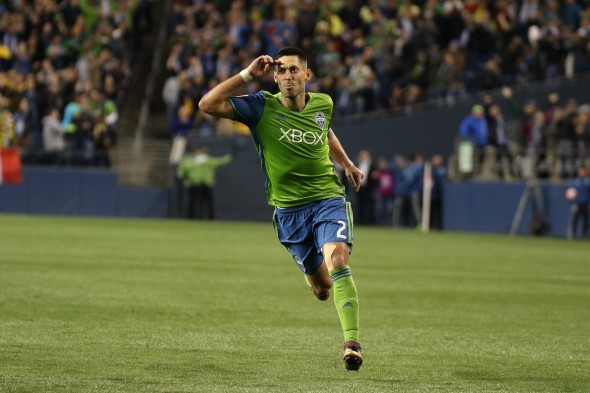 The centennial Copa America begins Friday, featuring 16 soccer nations from CONCACAF and CONMBOL (South America’s soccer confederation). The tournament is in the U.S. for the first time, through June 26, including three matches at CenturyLink Field.

The 45th edition of the Copa America is a special one designed to celebrate CONMEBOL’s 100th year. The tournament, normally contested every four years, was won most recently in 2015 by Chile, which hosted. The tournament has been expanded from its usual 12-team format to include more CONCACAF countries.

The complete schedule can be found here.

The tournament has been criticized by some as a cash grab, particularly given the choice to move the tournament for the first time to the U.S., which remains the sport’s most lucrative untapped market. The U.S. has been involved in the tourney only three times — in 1993, 1997 and 2011.

Others have said the tournament hopes to create the same kind of buzz in the western hemisphere that surrounds the European championship, set to begin June 10 in France.

Proponents of the tournament say that bringing the star power of Argentina’s Leo Messi, Uruguay’s Luis Suarez, Mexico’s Chicarito, and even Clint Dempsey of the Seattle Sounders can only provide positive visibility for the sport. Detractors say that without a berth to the 2017 Confederations Cup on the line (it was earned by Chile for its 2015 victory), the tournament has lost a great deal of its significance.

The star power may not even be present. Messi and Suarez have had injury scares recently, and may see limited action. Brazil is keeping Barcelona star Neymar out of the tournament, saving him to play in the Rio Olympics, where Brazil has never earned gold.

Whatever the case, it appears the initial reception to the tournament has been lackluster. Tournament spokesmen have declined to release initial ticket sales figures, but the Seattle Times reported Sunday that Seattle had the second-least-active resale market of the 10 host sites.

Low resale rates do not necessarily equate to low attendance, but the numbers are unusual in a part of the country where soccer is given serious consideration in cultural and media spheres. If interest in the tournament is low in the Pacific Northwest, it may have to do with the matches (chosen at random) that will play out at the Clink.

Haiti faces Peru Saturday, while Argentina will play Bolivia  June 14 in the third match of the group stage. It’s unclear how much excitement either game holds. Haiti is not renowned for its soccer prowess, and Argentina may already have Group D locked up by the time it faces Bolivia.

A quarterfinal match June 16 could bring the USMNT to Seattle if it finishes at the top of Group A, but the U.S. has been drawn into the toughest group of the tournament —  Colombia, Costa Rica and Paraguay (whose squad includes Sounders forward Nelson Valdez).

The tournament’s success, at least from FIFA’s perspective, will largely depend on its ability to draw in the casual American soccer fan, who pays attention every four years when the World Cup rolls around. Die-hards will be glued to their televisions and computers. But getting channel surfers to stop when they see Dempsey running downfield would instill confidence that the sport is truly growing at the rate supporters claim it is.

The tournament was timed to fit into the only logical window in the official FIFA calendar (a must, to tempt teams to bring their best talent), but will run afoul of both the NBA and NHL finals. TV audiences, perhaps more important than stadium attendance to executives, will be hard-won during the group stage of the competition, which comprises the bulk of the tournament’s action.

The Copa America is hoping to simultaneously celebrate its storied history and begin a bright new chapter in America over the next 23 days, but it will be up to a potentially apathetic local audience to determine if the tournament’s first steps on American soil break through, or cause it to fall flat on its face.

The Pumas, who play at the Kitsap County Fairgrounds in Bremerton, have played the Sounders once before in the Open Cup, in 2011. Seattle defeated Kitsap 2-1, and went on to hoist the cup. The Pumas, led by coach Pete Fewing, who has since returned to coaching the Seattle University men’s team, won the PDL national championship the same season.

Seattle seeks to bounce back after a disastrous loss to Portland last season in its fourth-round game in the Open Cup, which sparked a summer of mishaps.