Thiel: Seahawks’ Cable has some fixing to do

It’s way early, but assistant Tom Cable sees progress by first round pick Germain Ifedi, who needs to start and play well right away to help avoid another Arctic road trip in the playoffs. 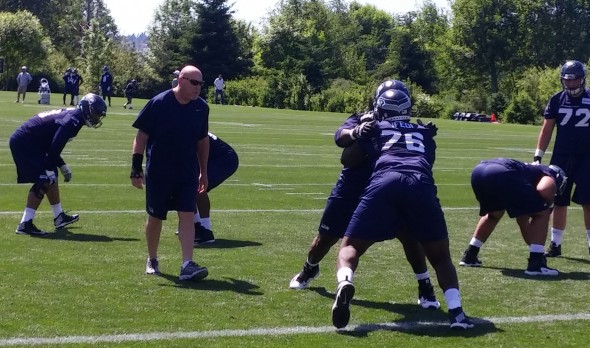 The coaching jobs of the Seahawks’ Tom Cable and the Mariners’ Mel Stottlemyre Jr. are a little bit alike — everyone can see when their players are expelling smoke and sparks, but few can explain how to fix them on the fly as the ground approaches.

Stottlemyre is on the hotter seat, because the Mariners’ starting rotation is suddenly haywire, putting in jeopardy the season’s start that had fans aroused from their traditional torpor.

Cable is in his off-season, but it wasn’t that long ago that he was nearly overcome with a franchise emergency too — his offensive linemen were protecting QB Russell Wilson so poorly that the Seahawks were about two sacks away from housing him in the Bahamas under a fake name and bad wig.

The Seahawks figured out a solution in time to make the playoffs, but the 4-5 start killed the chance at home-field advantage, which had the savage reward of playing in the coldest game in the football history of Minnesota. Russia’s Nordic-trained special-ops soldiers would have called in frozen and stayed home.

Cable and the rest of the coaches so don’t want a repetition that they lost their minds in the off-season and actually used a first-round draft choice on an offensive lineman. It was like Scrooge, scared straight, waking Christmas morning and buying the fattest goose in the land for the Cratchits’ holiday table.

The Seahawks pride themselves on dekeing conventional wisdom in the draft, so when they do the obvious and fill a screaming need, it must have been a crisis.

After a padless practice at Seahawks HQ last week, Cable was asked how much the early “sackapalooza” informed this year’s planning.

“I think it has a lot to do with, ‘Let’s make sure we are on the same page of doing what is best for our quarterback and our football team,’” Cable said. “So I think in that regard, it’s impacted everybody, sure.’’

And you thought the Seahawks didn’t want to acknowledge a whiff.

Asked how it was going so far in the organized team activity phase, Cable said all the usual things about it being way early to judge, particularly without contact, much less tackling, and that newcomer RT J’Marcus Webb was out with injury, yadda yadda,

But he did make one intriguing point. The first-round pick, Germain Ifedi out of Texas A&M and the likely starting right guard — the new J.R. Sweezy — was already smart enough to begin receiving the playbook.

“I think Germain is really blessed that way, mentally,” Cable said. “We actually had him doing install last week, and he did a tremendous job in only the first week of doing it.”

The benchmark is hardly something to change the Seahawks’ Super Bowl odds in Vegas, but relative to the bewilderment a year ago that had Drew Nowak, a former undrafted defensive lineman starting at center for the traded Max Unger for the first five games, incremental progress is noteworthy.

Going back to Cable’s remarks April 28 after Ifedi was taken with the 31st pick, Ifedi made on film and in person an impression that he could be fast-tracked into the starting lineup almost immediately.

“I was just really, really excited about how he could make things right when they got ugly,” Cable said. “He can get wide-handed, and get his hips up, and start catching someone who’s so big and strong, and just anchor down on them. That’s impressive. Not many guys can do that.”

It also didn’t hurt that Ifedi made his chops in the Southeastern Conference.

“When you play in that particular league, you’re probably more ready in terms of the NFL, coming in as a lineman,” Cable said. “You’re playing all those big crowds and loud noise, against extremely talented pass rushers pretty much every week. The competition won’t faze him a bit.”

The franchise has made a large bet on Ifedi coming through right away. If Justin Britt makes the transition from guard to starting center, and Garry Gilliam moves over from right tackle to left tackle, and Mark Glowinski elevates to starting at left guard, the Seahawks, including Webb at right tackle, will have someone new to his Seattle position at all five spots.

The capacity for mayhem is large, and margin for error is small. So the fact that Ifedi is a quick study on top of being an anchor-down blocker should be of some relief to many, especially Wilson.

Cable begs for restraint in June.

“When’s the first game? Really, let’s keep this real now,” he said. “This is OTAs. this is a time to get them prepped for camp.

“I think they’re doing better than we have in a while.”

If they backslide from what needs to be a fast start, Cable can always show them film of the 12-below-zero Seahawks sideline in the Minneapolis shade.