It appears that the takedown of the Bellevue High School football program could have the unintended consequence of leading to a teardown of the WIAA. One can only hope. 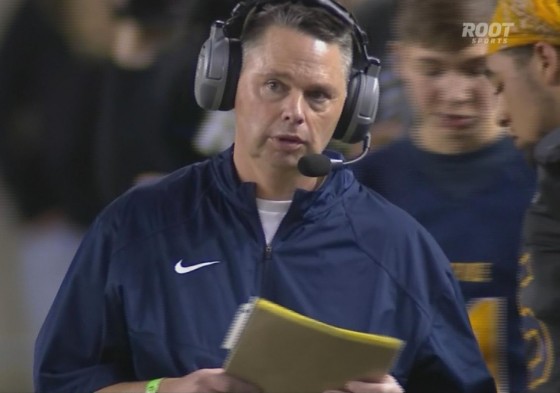 All that was required to make the Bellevue High School football imbroglio a reality-TV smarmadrama was a good conspiracy theory. Butch Goncharoff, the soon-to-be-ex-coach of the beleaguered Wolverines, identified one Tuesday at a packed public meeting of the Bellevue School Board.

Then Goncharoff walked away from the microphone to a rousing ovation from BHS students, including many team members and their parents. Whoo-boy. After a set of sanctions that were handed down Tuesday from the Kingco League that shocked the BHS football crowd and delighted the communities whose teams have been victims of the Wolverines’ dynasty, it appears that a courtroom donnybrook is imminent.

If we’re lucky, it will tear apart the structure of high school sports in the state. Like an old barn somehow surviving in the Midwest’s Tornado Alley, it’s overdue to come down. Let’s set aside for now the discussion of guilt or innocence, for which there is likely to be endless disclosures and contradictions.

Instead, let’s take at look at the themes in the conversation that need to be disabused immediately for those among us who have a hankering for clarity and honesty.

“What about the children?”

This is not, and has never been, about kids. This is about winning. Big winning. Many coaches and parents would have it no other way. Seahawks Pete Carroll should have known better than to send this tweet:

It's sad & unfortunate that grownups have taken football away from kids because of grownup problems. That's just wrong. #BellevueFootball

The sanctions do not stop the Bellevue program from practicing and playing a full season. It simply will be banned from the glam: No titles, no postseason, no big-time non-conference games. If that’s a hardship, go ask opponents beaten by Bellevue 48-0 over the years.

This isn’t the tech industry employment scene, where free food, free parking and a free gym are mandatory perks. This is public high school ball. Remember the biggest lesson from your own schoolyard days: No one likes entitled assholes.

“But the kids are innocent victims.”

Wrong. Any kid who is part of creating a phony residence, or attending phony tutoring, knows exactly why and how it’s being done. So do all of his friends/teammates, because no kid can keep a secret like that.

As for younger kids as yet uncompromised by the scandal who “pay a price” for the sins of predecessors: It’s unfortunate, but can a more real lesson be taught in high school that life sometimes is unfair? 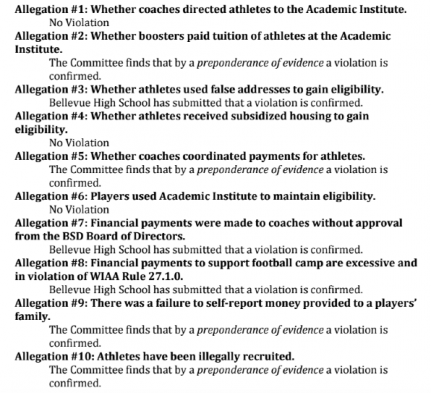 “Boosters just want what is best for kids.”

While undoubtedly true, that is a fig leaf to cover a multitude of shenanigans. Whether it’s Bellevue High School or the University of Washington or any program that aspires to the big time, they portray the offer of a few bucks, or finding a soft teacher who wants to help a kid from a poor school district, as understandable acts of human compassion.

But the acts undercut the entire fabric of fairness that is the basis by which schools agree to band together to form leagues and conferences. Wealthy schools such as Bellevue, and wealthy school districts like Bellevue, have advantages over, say, Seattle Metro, that administrators over the decades have tried to mitigate with restrictions that advance fair play.

It isn’t that Goncharoff, as well as many coaches who do hard work well, didn’t deserve better compensation, it’s that $60,000 annually again rips at the principle of fairness.

Parents such as booster club president John Connors often have come to wealth by being ruthless in business. Connors, who said this week the group is preparing lawsuits against the BSD and WIAA, didn’t get to be the chief financial officer at Microsoft by making sure his peers at Apple had the same resources as the Redmond computer shop.

As with many who reach the pinnacle, they do whatever it took to win, regardless of cost or consequence. Apparently he’s having a hard time with the quasi-socialism of public high school sports.

“Everybody else is doing it.”

If you’ve never heard this/tried this/argued against this lameness, you have never been a child/parent/human. So please consider leaving your human habitat life here and getting employed on Wall Street, where the weasel community flourishes unwatched, ungoverned, unhindered.

Duh. The parents, coaches and administrators wouldn’t have it any other way. If they want it another way, they are free to change it. As I’ve written about the NCAA administration and its bylaws, this is not governance imposed by the Taliban. The NCAA and WIAA are more or less trade associations designed to promote the welfare of their memberships, in all its diversity and conflicted agendas.

What the WIAA and NCAA do best is make sure the football fields are 100 yards, the free throw line is 15 feet and the tournament brackets line up. Beyond that is nothing but quagmire. Eligibility-rules enforcement is notably underfunded, bewildered, confused and subject to personal biases.

Here’s the key point in this essay: That’s the way everyone wants it. To do better would be to invest heavily in detectives and compliance officers to check the dozens of eligibility issues that arise annually whenever talented athletes show up to disrupt the balance of power.

The NCAA gets regularly shamed into improving enforcement by every busted school claiming their misdeeds go on elsewhere, unpunished. But the NCAA is awash in cash. The WIAA, just as every prep sports association of its kind in every state, is not. Yet as inept as the governance may be, decisions are final because there is no higher authority. Ineffectual as it is, the system wobbles along mostly based on trust among the “governed.”

Competitive coaches and athletics directors more or less have to trust that rivals don’t go over the line. Much. Co-existence is based mostly on the “I won’t tell on you if you don’t tell on me” code. That’s a lousy model when parents are screaming at each coach that their kid needs a college scholarship or he’s doomed to drugs and despair.

But when a school like Bellevue breaks form with top facilities, a well-compensated staff, talented kids who show up from long distance to help win 11 state championships in 15 years, that’s when it all breaks down.

Envy and jealousy set in. That’s when Goncharoff intimates conspiracy with his comment about “a set-up from day one.”

As tawdry as this episode will be if the Bellevue boosters follow through on their lawsuit,  deploying subpeonas to produce depositions that will pants everyone, including themselves, there is at least a chance that tearing down the most successful program in state prep sports history will have one salutary impact.

If that doesn’t become the goal, a colossal waste of time and school resources are at hand.