The KingCo League banned Bellevue HS football from the postseason and outside donations for four years Tuesday, citing a “preponderance of evidence” that significant violations occurred. 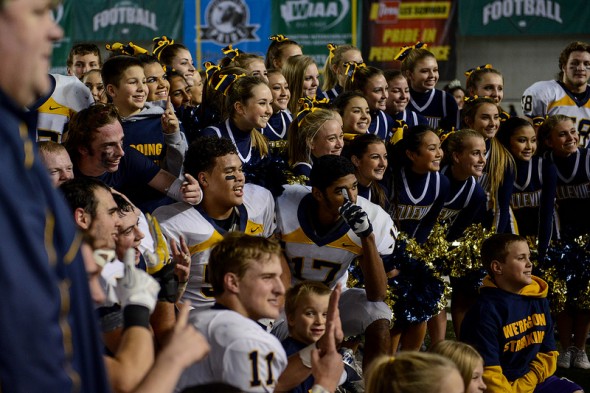 A panel of Kingco League athletics directors imposed sanctions on its most successful football program at Bellevue High School Tuesday. Basing its decision on a “preponderance of evidence” that the violations occurred, the panel issued a four-year ban on post-season play for the Wolverines and exiled for the same period the program’s booster group.

The panel agreed with the evidence that the Bellevue program had, for years, recruited students to transfer and that the booster club made payments to coaches in amounts greater than $500, violating WIAA rules. (Sanctions document here.)

Additionally, the board believed the program had been responsible for coordinating tuition payments for players who attended The Academic Institute, a private alternative high school in Bellevue that former teachers had labeled a “diploma mill.” The information was based on a 68-page report commissioned by the WIAA and released April 26 as well as a supplemental investigation conducted by the Bellevue School District.

Unaddressed, but in jeopardy, were the 11 state championships won over the 15-year tenure of Goncharoff, whose firing was recommended by the BSD. The voiding of the titles is within the administrative purview of the Washington Interscholastic Activities Association, the governing body for state prep sports.

Goncharoff addressed a packed meeting of the Bellevue School District Tuesday. Saying the sanctions were wrong, he claimed, “This has been a setup since day one . . . somebody please stand up and fight back.

He left the room to a rousing ovation led by many Bellevue football players and their parents.

His plea apparently was heard by the BSD, which nevertheless had already recommended his firing. Superintendent Dr. Tim Mills said at the meeting that an appeal of the Kingco sanctions could be ready as soon as Monday.

“We are concerned as to why the Kingco hearing panel did not provide any specific factual decisions supporting their decisions,” Mills said. “We believe these sanctions are too severe and not in line with previous sanctions of similar violations. We are concerned about this decision and impact and harm it would place on current and future students. We are preparing an appeal to protect our students.”

The panel, representing all members of a 16-team conference that stretches from Mount Si to Mercer Island, also agreed that some players used fake addresses to gain eligibility and that the program failed to self-report a host of violations, including payments from a coach to a player’s family.

The program is banned from the postseason through the 2019 season. Additionally, the team may not play any games that are not a part of the 3A League regular season for two years. The team cannot play any out-of-state opponents for four years. The varsity will also be unable to win the league title, regardless of its record, through the 2019 season.

Assistant coach Pat Jones has been told his contract would not be renewed, and has filed an unfair labor practice complaint with the Public Employment Relations Commission.

Coaches will be barred from taking any part in the program, including clinics, speaking engagements, and contact with players or future players. The booster club admitted to paying $60,000 a year for what it described as “non-football activities,” but claims the payments did not violate WIAA rules.

The booster club has come out swinging. Before the sanctions were announced, a letter circulated to members by booster club president and former Microsoft CFO John Connors stated that the club was pursuing options for litigation to overturn any potential sanctions and the possible termination of coaching staff.

The letter said in part:

It appears the conference adopted – without a critical eye — the flawed rule interpretations and false inferences on which the WIAA report was based.

The evidence shows that the practices KingCo now is penalizing — including summer sports camps for kids and paying coaches for extra work outside of the season — were approved by Bellevue School District and are shared by many, many area schools. These efforts were and are fully within the rules.

More importantly, the four-year penalties will fall mainly on kids who had nothing to do with this dispute. Robbing our kids’ right to compete is not the solution, nor is depriving them of the ability to receive the same booster support that other area teams receive.

Supporting athletics, the arts, and other extracurricular activities is precisely what the community should be doing, and the conference’s action sets a precedent that should raise a red flag to everyone. We will continue to defend our right, and the right of booster clubs around the state, to make these activities available to kids.

The club itself was sanctioned by the panel, ordering that the football program may receive no outside donations of money, equipment, products or services for four years. In essence, the program will only receive funding from the district-approved budgeting process, though the committee said that Bellevue’s athletic director may appeal this sanction in spring 2018 and have it rescinded if the school convinces Kingco that it has put rules in place to properly oversee the boosters.

Transfer students will also have to provide the school district with substantial evidence that they are living at their listed addresses in order to play. Requirements include residency contracts, copies of rental or sales agreements for the address in question signed by a parent or legal guardian, and a utility bill for the residence with the parent or guardian’s name on it.

Kingco added that if the WIAA stripped state titles from Bellevue for fielding ineligible players, it would strip any Kingco title that the program had earned in the same year.