A 4-0 rout of Costa Rica, including a goal and two assists from Sounders’ star Clint Dempsey, kept the USMNT on track in the Copa America Centenario. 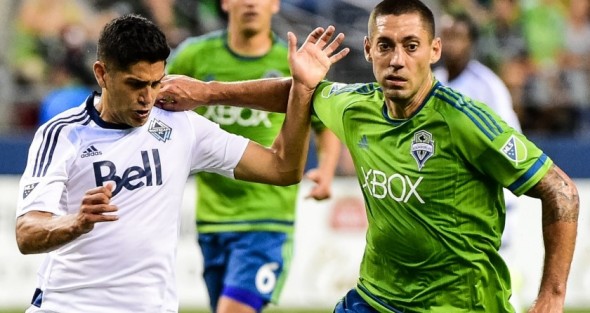 The USMNT trounced Costa Rica 4-0 Tuesday night at Soldier Field in Chicago, reversing its fortunes after a 2-0 loss to Colombia to start the Copa America Centenario Friday. Colombia maintained its position at the top of group A, securing a spot for itself in the knockout round with a 2-1 win over Paraguay.

The U.S. didn’t wait long to strike against Costa Rica, a fierce CONCACAF rival with a history of giving the Stars and Stripes trouble. Bobby Wood was knocked down in the box in the eighth minute, allowing Seattle Sounders forward Clint Dempsey to convert the penalty kick and notch his 50th career goal for his country.

Dempsey picked up two assists to help put the game out of reach. He laid a ball off for Jermaine Jones in the 37th minute, which Jones curled into the far side of the net past Costa Rica keeper Patrick Pemberton. In the 42nd, Dempsey found Wood with his back to net. Wood spun and fired, surprising Pemberton and nesting a quick shot into the net.

Graham Zusi added insult to injury in the 87th minute, picking the ball away from a defender and beating Pemberton one-on-one to complete the rout.

The U.S. has put itself in the driver’s seat to finish in the top two positions in group A and advance to knockout stage of the competition, though it would take a minor miracle to overtake Colombia at the top of the standings. Whoever finishes atop the group will play its quarter final game in Seattle at CenturyLink Field on June 16 against the runner up from group B.

The U.S. plays Paraguay Saturday (4 p.m., FS1) at Lincoln Financial Field in Philadelphia. A win against the side of Sounders designated player Nelson Valdez would guarantee a trip to the quarterfinals. A draw would be enough to see the U.S. through as long as Costa Rica fails to beat Colombia, the No. 3- ranked team in the world, by more than six goals. A loss to Paraguay would eliminate the U.S. from the competition.