Ranked as the No. 3 player in the MLB draft, OF Kyle Lewis of Snellville, GA, lasted long enough for the Mariners to take him 11th Tuesday. 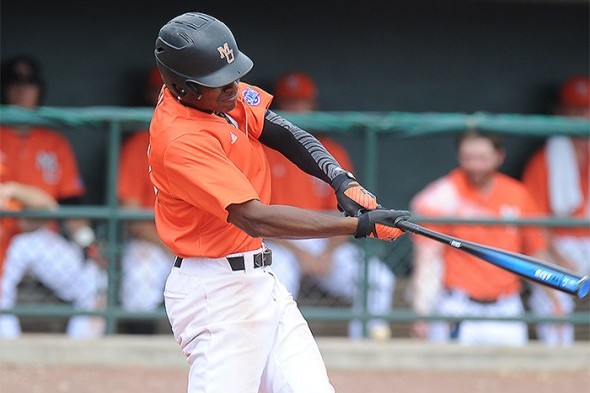 The Mariners selected Kyle Lewis with their first pick in the MLB draft. / Mercer University

The Mariners Thursday used the 11th overall pick in the first round of the MLB draft on Kyle Lewis, a 6-foot-4, 210-pound outfielder from Mercer University (Macon, GA). The 20-year-old Lewis, who entered the lottery as the No. 3-ranked prospect by MLB.com, has been likened to a young Adam Jones, an outfielder selected by Seattle in 2003 who is a five-time All-Star with the Baltimore Orioles.

“He has Adam Jones potential,” said MLB.com commentator Harold Reynolds, who played second base for the Mariners from 1983-93. “He has unbelievable potential and a great work ethic. I think this is a great pick.”

“I love this pick. He’s got smarts and great work habits,” added former Seattle GM Jack Zduriencik, now an MLB Network analyst. “This is a really nice pick for the organization. He has great range and a great bat.”

A native of Snellville, GA., who went undrafted out of high school in 2013, Lewis played sparingly as a freshman before nearly winning the Southern Conference Triple Crown and then starring in the Cape Cod League in 2015. He repeated as Southern Conference Player of the Year in 2016 while contending for the NCAA Division I lead in batting and home runs.

Lewis, named Baseball America’s College Player of the Year, is a two-time Southern Conference Player of the Year and was selected first-team All-America by Baseball America. He is a semifinalist for USA Baseball’s Golden Spikes Award and the National Collegiate Baseball Writers Association’s Dick Howser Trophy. Both awards honor the nation’s top player, as selected by the respective organizations.

“We thought he was going to be picked before us,” said Tom McNamara, the Mariners director of amateur scouting. “We’re very excited that he made it to us. He’s a 6-foot-4, middle-of-the-order potential bat that had a big year at Mercer University this year. He’s a good athlete who we believe has a lot of potential.”

“This is the most excitement I’ve ever felt in my life,” said Lewis, who throws and bats right handed. “I’m ready to go. I think there are a lot of comparables between me and Adam Jones. I’ve watched a lot of Adam Jones videos. He’s a great guy to model myself after. I definitely have some nerves going into this (pro career), but I’m ready to play.”

With his leverage and bat speed, Lewis has easy pop to all fields. His swing is busier than most scouts would like, but his approach is generally sound and he tied for the D-I lead with 66 walks entering NCAA tournament play. Lewis is a fringy runner out of the batter’s box, but he has solid speed once he gets going. Some evaluators think he has a chance to stay in center field, but most believe he’s destined for right field, where he could develop into a serious home run threat with average or better tools across the board.

Lewis was a two-sport start at Shiloh High School in Snellville, lettering in baseball and basketball. In baseball, he was named a 2012 Max Preps Region 8AAAAA second-team selection and a 2013 Rawlings/Perfect Game High School Senior Preseason All-America honorable mention.

The Mariners selected infielder Joe Rizzo out of Oakton High School in Oak Hill, VA, with their second selection (50th overall pick).. The 18-year-old Rizzo was a 2016 preseason Rawlings-Perfect Game 1st Team All-America. He hit .392 with four home runs and 12 RBIs during his senior season. Entering the draft, Baseball America listed him as the 40th-best prospect.

The following are Seattle’s first picks in each amateur draft in the Safeco Field era (since 1999). All of the players were first-round choices, except in 2000 and 2015, when the Mariners’ first picks came in the second and fourth rounds, respectively. Of the 17 players listed, only RHP Taijuan Walker is on Seattle’s 25-man roster.