As Hisashi Iwakuma again held the Rangers in check, Dae-Ho Lee had two home runs to help set an MLB record as Seattle Friday took the first of three against the Rangers. 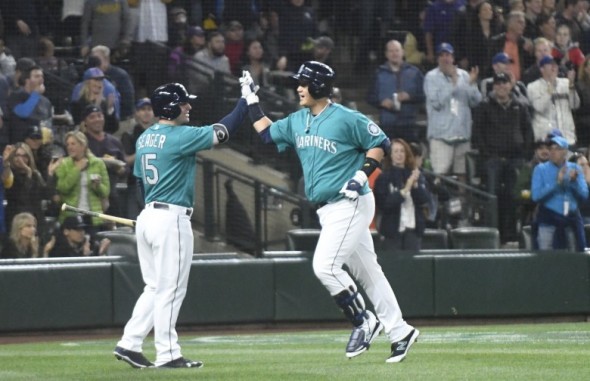 The Seattle Mariners gained a game in the AL West standings and made a little history Friday night when 1B Dae-Ho Lee hit two home runs in a 7-5 win over the Texas Rangers (box). Lee became the fourth Mariners player in as many games to homer twice. No other team in MLB history has had four different players hit multiple homers in four consecutive games in the same season.

Lee’s second homer, a three-run shot in the fourth inning, broke a 1-1 tie. As if the historical footnote wasn’t sufficiently memorable, 3B Kyle Seager followed with a home run of his own – the first time the Mariners have had back-to-back homers this season – for a 5-1 lead.

Seattle overcame four Texas homers – two from Mitch Moreland – in large part because the Rangers’ dingers all came with the bases empty. Starter Hisashi Iwakuma gave up three solo home runs on a night when he turned in another good outing against the Rangers. Five days after a tough-luck loss to Texas, Iwakuma earned the win as the Rangers had only three other hits over his seven innings of work.

Reliever Nick Vincent allowed Texas to pull within 5-4 with a run in the eighth before closer Steve Cishek came on to earn his 14th save of the season with four-out closing stint. It marked only the second time this season that Cishek, who gave up Moreland’s second homer, a two-out shot in the ninth, had a save with more than an inning of work.

Three home runs gave Seattle a league-high 92. The Mariners  built a 5-1 lead despite just four hits – one fewer than the Rangers had at that point. Texas starter Derek Holland gave up five hits, but that was enough.

Seattle managed one hit, an infield single by SS Ketel Marte, off ex-Mariners reliever Tom Wilhelmsen in his two innings of work. The Mariners scored two runs in the eighth, thanks in part to a Shawn Tolleson wild pitch and a throwing error on LF Ryan Rua on a play at the plate.

“After he hit two home runs, I think everybody on our team is going to wear one tomorrow.” –  Seager, when asked about the new necklace Lee was wearing

The only teams to have players hit multiple homers in four consecutive games were the 1998 Cubs and the 2000 Indians. However, both had players who did it twice during the four-game run. Chicago’s Sammy Sosa had multi-homer games twice during the Cubs’ four-game streak in July 1998. Cleveland’s Manny Ramirez and Jim Thome each had two multi-homer games from July 17-20, 2000 . . . One other franchise has had four different players hit multiple homers in four consecutive games, although it happened over two seasons. The Detroit Tigers accomplished the feat at the end of the 1985 season and the beginning of 1986 . . . Marte was back in the leadoff spot, the first time he hit first since coming off the disabled list. Marte was playing some of his best baseball after settling into the leadoff role in mid-May, before landing on the 15-day DL with a hamstring injury  . . . The Rangers were without 3B Adrian Beltre (hamstring) for the second game in a row. Beltre, the former Mariner, is day-to-day . . . Friday marked Texas C Robinson Chirinos’s first game since April 9. He was activated from the 60-day disabled list Thursday, after recovering from a broken forearm.