Izaic Yorks of Tacoma’s Lakes High and the University of Washington finished second Friday in the 1,500 meters at the NCAA track championship in Eugene and will compete at the Olympic trials. 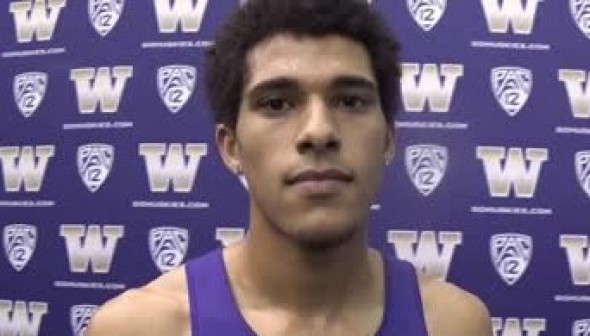 Izaic Yorks finished second at the NCAA championship and is off to the U.S. Olympic trials. / Washington athletics

EUGENE, OR. – Izaic Yorks finished his memorable college track career without winning an NCAA championship. Still, the University of Washington senior said he had to reflect only on his rocky freshman year to realize how far he came as an athlete and a man after he took second in the 1,500 meters Friday night at the NCAA track and field championship at the University of Oregon.

“I thought I was going to quit the sport altogether,” Yorks recalled, “so to even be at this level and compete for a national championship and trying to win it, it’s a blessing.”

Yorks, hindered by anemia and an ankle injury in his one season at the University of Portland, blossomed after transferring to Washington. The former Lakes High School standout still owns the fastest collegiate 1,500 time (3 minutes, 37.74 seconds) this year, but Yorks’ 3:38.06 effort Friday came up just short.

Yorks led most of the race, but Akron (Ohio) junior Clayton Murphy surged past Yorks and Virginia junior Henry Wynne on the final straightaway. Murphy ran a sizzling 55.84 final lap to win in 3:36.38 before a crowd of 12,244 (a meet record for a Friday) at historic Hayward Field.

“I wasn’t expecting his kick to be as effective as it was,” Yorks said. “Me and Henry were sucking up a good bit of wind up front. That was affecting us, slowly being a negative impact on our race performance, so we couldn’t cover the move (by Murphy) in the end.

“It’s really good on Clayton running to his strengths and kind of staying out of harm’s way so he can better utilize his kick.”

Despite a strong headwind on the final straightaway, Yorks said he and coach Greg Metcalf decided it was best to take the lead early.

“It takes a little more out of you if you’re the lead runner,” Yorks acknowledged.

Yorks, gearing up for the U.S. Olympic Trials July 1-10 in Eugene, said he’s “in a good place spiritually and emotionally” now that he’s married and no longer letting “track define me.” Yorks loved the vibe at Hayward Field, the mecca of U.S. track and field.

“Our sport is not a glamor sport, at least right now, so to see the stands filled, it’s fun,” he said.

Yorks smiled before adding, “You feel like a rock star for 3 minutes and 38 seconds.”

Gilbert, a sophomore out of Skyview High School in Vancouver, WA, said he’ll take a short break from training before turning his focus to cross country. Gilbert helped the Huskies take eighth in the NCAA cross country meet last year. he has eyes on a bigger prize this fall.

“I think we’re capable of winning,” he said.

Cheserek, a  junior from Kenya via New Jersey, tied the all-time record of 15 titles in cross country and indoor and outdoor track.

Other meet highlights included the record-breaking 800 of Texas A&M freshman Donavan Brazier; the 100 and 200 victories of Arkansas senior Jarrion Lawson, who won the long jump Wednesday; and the career-best 7-foot-4½ leap of high jump champion Randall Cunningham. The latter, a sophomore at USC, is the namesake son of the former NFL quarterback who coached his son in the high jump back home in Las Vegas.