Recalling that they goofed in not drafting Seahawks QB Russell Wilson three years ago, the Mariners drafted Trey Griffey, son of Junior, even though he’s a wide receiver at Arizona. You never know. 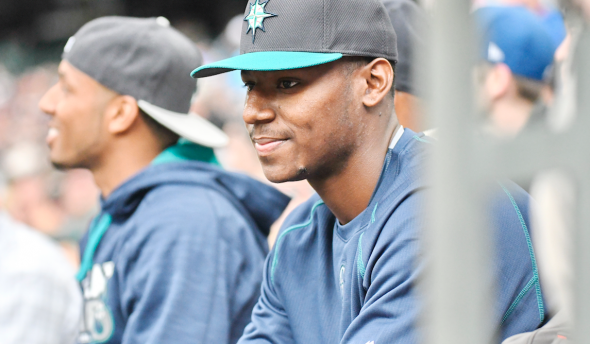 It’s not often that a 24th-round draft pick generates much interest, but the Mariners found a way to move the meter when they added a player with a familiar surname Saturday. With the 717th overall pick in the first-year player draft, the Mariners selected a kid named Griffey.

That Trey Griffey, a 6-foot-3 wide receiver on the University of Arizona football team, hadn’t played baseball since middle school was of little consequence to the Mariners.

“We just felt like Ken Griffey Jr. has meant so much to this organization that we felt like we owed it to him,” director of scouting Tom McNamara said Saturday evening. “If Trey decides he ever wants to play baseball, he’s got an opportunity right here.”

McNamara added that the organization approached Griffey during Trey’s senior year in high school, asking if it would be OK to take him even though Trey had every intention of playing college football, and little interest in following in his father’s footsteps. Dad told the Mariners at the time that he would just as soon let Trey stay under the radar, so the organization granted the family’s wish.

Fast forward four years to the summer before Trey’s senior season in Tucson. McNamara was chatting with Griffey Jr. a couple of weeks ago and floated the idea again. This time, he gave his blessing.

McNamara added that part of the motivation came from the Texas Rangers’ decision three years ago to draft Seahawks QB Russell Wilson in the Triple A portion of the Rule 5 draft. McNamara felt like the organization had let its fan base down by allowing Wilson to get drafted by a team in another city.

“It was like, wow, he’s just across the street, you know?” McNamara said.

This time, the Mariners were not going to let anyone else get the rights to a Griffey – even if the chances of Trey ever picking up a bat again are about as likely as his father coming out of retirement. In 1991, the Mariners drafted Craig Griffey, younger brother of Ken, out of Ohio State in the 42nd round.

“It was almost like we didn’t want anyone else to draft Trey,” McNamara said. “If he ever decides to play baseball, we wanted him to be a Seattle Mariner.”

Of course, that wasn’t the only reason.

“We saw (Trey) in the batting cage a few years ago, when Junior was still playing, and he had a nice swing,” McNamara said. “He had a swing very similar to his father’s. Obviously, I’m not saying he’s the next Ken Griffey Jr., but he had a real natural swing.”

The Mariners went back to the well of nepotism 13 rounds later, when they selected Garfield High School C Eli Wilson with the 1,107th overall pick. Wilson is the son of former Mariners catching star Dan Wilson.

The younger Wilson has committed to the University of Minnesota, his dad’s alma mater. But after hitting .394 with six doubles, three triples, 17 RBI and 14 stolen bases as a senior, he might be inclined to give pro ball a look.

Mercer University CF Kyle Lewis signed a contract in excess of $3.2 million with the Mariners Saturday. That wasn’t all he got.

Shortly after officially signing, Lewis, 6-foot-4 and 190 pounds, received a bat and shoes from Robinson Cano and a glove from Felix Hernandez. Then he took batting practice.

“It was unbelievable,” the 11th overall pick said early Saturday evening. “Something I’ve been dreaming about my whole life.”

The Mariners plan to start Lewis at their Peoria, AZ., complex before sending him to Everett to play with the AquaSox.

“We are thrilled to have Kyle in the organization,” said McNamara.

Area scout John Wiedenbauer, who saw Lewis play more than anyone else in the organization, said that he expects Lewis to be a great addition.

“It seemed like every game I went to see him, he was hitting the ball all over the park,” Wiedenbauer said. “We were pretty excited about him.”

The Mariners’ draft included Morgan McCullough, an 18-year-old shortstop from West Seattle High School. McCullough, a University of Oregon commit, was selected in the 33rd round.