Felix’s injury will keep him out another 4 weeks

The calf strain that put Mariners ace Felix Hernandez on the disabled list June 1`will keep him there for at least another month to allow for a full healing. 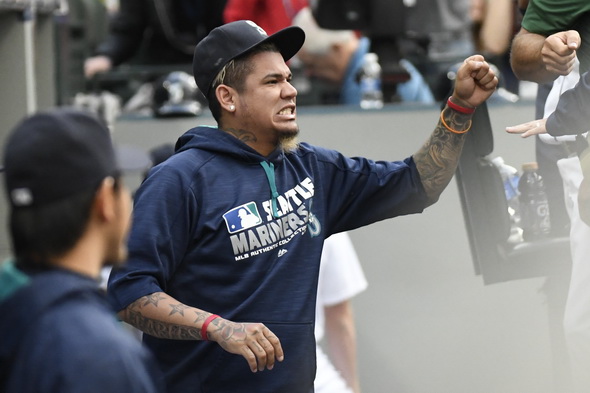 In the dugout before the game Saturday, Felix Hernandez was grimacing from the pain in his injured calf. / Alan Chitlik, Sportspress Northwest

The King will not soon be back at the castle.

ESPN.com reported before the Mariners-Rangers game Saturday that the strained right calf of Felix Hernandez is not healing quickly, and he will have to rest another month. He’s been on the disabled list since June 1.

A second MRI Friday of the injury showed some improvement, but the doctor ordered further rest to prevent re-injury, Hernandez said.

“When the (doctor) told me that, even though I understand that he’s just doing it so I don’t reinjure myself until I am fully recovered, I felt really bad,” Hernandez was quoted as saying. “All I want to do is pitch with my team.”

Hernandez, 4-4 with a 2.86 ERA in 10 starts, has missed two starts and Saturday was his third. He’s been replaced om the roster by James Paxton.  Hernandez said he expects to begin throwing after the team’s 11-game road trip.

“He joked that I will be their best acquisition at the trade deadline,” Hernandez said. “But it’s really frustrating. That’s all I like to do, pitch.”

Hernandez is on the disabled list for only the the third time in his 12-year career, and the first since 2008.