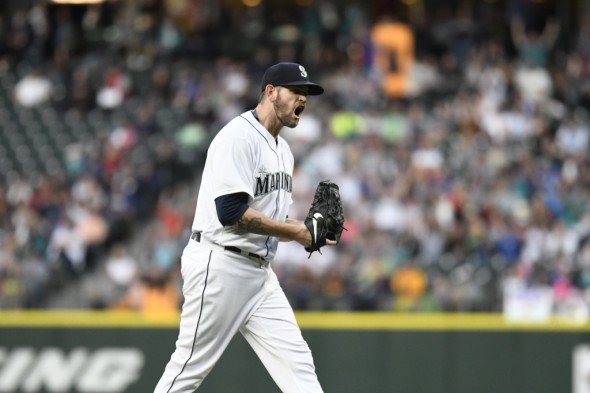 James Paxton again filled in well for Felix Hernandez, who may be out another month. / Adam Chitlik, Sportspress Northwest

Solo home runs in the ninth and 11th innings were all the offense Texas needed on a Saturday night when the Mariners were one strike away from pulling to within two games of the division-leading Rangers. Rougned Odor’s leadoff home run in the 11th gave Texas its first lead and it held up in Seattle’s 2-1 loss to the Rangers (38-24). The Mariners (34-28) fell four games back heading into Sunday’s series finale.

The Mariners were one strike away from taking a 2-0 series lead when slugger Prince Fielder hammered a 3-2 pitch from closer Steve Cishek 407 feet into the right field stands to tie at 1 in the ninth. It marked Cishek’s fourth blown save of the season and his third in six opportunities since May 13.

On a day when news leaked that ace Felix Hernandez might be out another month, his replacement looked the part. LHP James Paxton threw 6.1 shutout innings, allowing six hits while striking out seven. His final pitch, No. 101, was a 98 mph fastball that struck out Fielder. Paxton ran into some control problems in the fourth but shored that up and worked his way out of jams in back-to-back innings.

Rookie Edwin Diaz came on with a 98 mph fastball of his own to finish off the seventh. Joaquin Benoit followed with a scoreless eighth, putting Cishek in position to earn the save. After getting the first two outs Fielder jumped on a belt high fastball.

Mike Montgomery (2-1) served up the Odor homer for his first loss of the season.

The big bats took a while to get going. Seattle had one hit over the first four innings before 1B Adam Lind hit a solo shot in the fifth. Seattle had chances, including a threat in the 11th that left two runners stranded, but the Mariners didn’t have enough clutch hitting.

The biggest news was that not a single Mariner was able to hit more than one home run. Nelson Cruz, Chris Iannetta, Robinson Cano and Dae-Ho Lee each went deep twice in a game over the previous four games, ending that streak at four games, matching the longest in MLB history.

“Prince Fielder, down to his last strike against their closer, to put it out of the ballpark for us . . . something that we look for from him. Really, I think just a great effort by him because we know what he means inside this clubhouse and how that feels. On the 3-2 pitch,  obviously was just a tremendous swing, put the barrel on it, got us where we needed to be.” — Jeff Banister, Rangers manager

“It was awesome. I was nervous, I’m not going to lie to you.” – First-round pick Kyle Lewis, on taking batting practice with the Mariners shortly after signing with the team Saturday afternoon

It’s possible that Hernandez might not be back pitching until after the July 11-14 All-Star break . . . With the loss, Seattle fell to 5-2 in extra-inning games. Texas is 2-5 . . . LF Norichika Aoki was back in the leadoff spot Saturday. Aoki took Friday off, opening the door for SS Ketel Marte to move to the top of the lineup. But the Mariners went back to Aoki Saturday while Marte was in the No. 9 hole. Aoki took a pitch off his right kneecap in the bottom of the 11th inning but was able to stay in the game . . . Seattle sent RHP Justin De Fratus, a minor-league reliever who was 2-2 with a 3.21 ERA in Tacoma, to Texas on Saturday to complete a May 22 trade when the Mariners re-acquired OF Patrick Kivlehan for a player to be named.