Mariners add to the club lore of never-seen-that-before when Robinson Cano stumbled over his own shin guard on the way to second base, where he made the last out of a 6-4 loss to the Rangers. 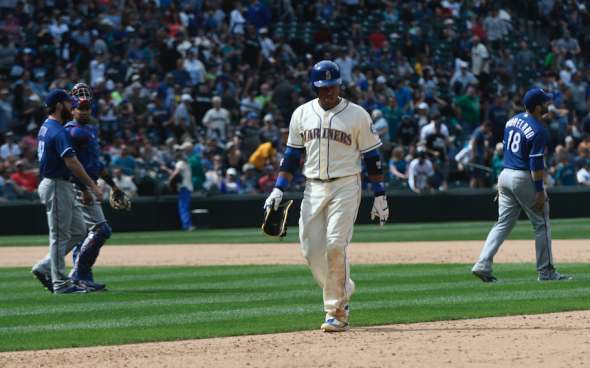 Robinson Cano walks to the dugout at game’s end with the offending shin guard that held him up on the basepath. / Alan Chitlik, Sportspress Northwest

Remember the Mariners’ astonishing comeback against the Padres in San Diego June 2? Where they were down 12-2 and won 16-13, the greatest comeback in club history? A case can be made that they drained much of their karmic supply for the season. Especially considering what happened Sunday.

They lost an opportunity to tie or win the game against the division-leading Texas Rangers in the bottom of the ninth because of a wardrobe malfunction.

Down 6-3 with two out, 2B Robinson Cano sent a liner skipping into the right field corner that scored SS Ketel Marte from third base. But on the way to an easy double, Cano’s shin guard dislodged and he stepped on it, which turned what seemed to be a stand-up two-bagger into a double-bagger of embarrassment in the 6-4 loss (box).

The perfect throw from rookie RF Nomar Mazara easily beat Cano’s slide. The game ended with nearly the same dull thud as Saturday night, when Seattle was a strike away from a 1-0 triumph that turned into a 2-1 defeat in 11 innings.

The upshot was a 2-1 series loss to the Rangers (39-24), who have beaten the Mariners (34-29) in five of the past six meetings between the clubs. Which tidily explains the Rangers’ five-game lead in the American League West.

Mariners manager Scott Servais has no category for karma in his sabermetrics database, even if the Mariners have lost seven of 10 since that astonishing comeback. But he does have an eye for the obvious.

“It was a disappointing series,” he said. “We were right there . . . they played better than us.”

Not by a lot. But enough.

The Mariners’ lineup, despite the returns to health of Marte and Leonys Martin, had nothing going against Rangers starters Colby Lewis Saturday nor Cole Hamels Sunday. When ace Yu Darvish returns from a resting a sore arm, the Rangers have perhaps the best trio of starters in the American League, with Derek Holland a strong No. 4.

The Texas offense, which started Sunday’s game with six starters hitting .268 or better, and played the series without the everlasting 3B Adrian Beltre (hamstring), gets steady production from nearly every position — and only now is the dreadnought Prince Fielder starting to warm up.

The recent six games, three in each home park, made for a good barometer of the teams. In mid-June, the reading was obvious enough that Servais was defensive.

“Lotta games left to play, nothing has been settled,” he said. “Lotta things can happen.”

Including in the middle of the basepath.

“I stepped on my shin guard halfway (to second) so I had to slow down,” Cano said. “If you watch the video, I step on it like three times. I had to slow down because I didn’t want to roll my ankle or anything bad to happen.

“It’s not a situation that you want to end the game.”

The failure was goofier, but not as dramatic, as Saturday, when closer Steve Cishek had Fielder down to his final strike before the big man homered to send the game to extras. Sunday, the Mariners were still down 6-4, but were Cano safe, DH Nelson Cruz was next up, representing the tying run.

No guarantees, of course, but as Servais said, “I liked our chances with Nellie coming up.”

It was already a bit of a reach even having a chance. Seattle starter Wade Miley was in trouble a lot because of an absence of fastball command. He gave up three runs on only four hits, but he walked three, had two wild pitches and a balk.

After 97 pitches through five, Miley was done. Reliever Steve Johnson was worse, walking two and giving up a single to the three batters he faced.

Coming back from a 6-1 deficit showed both Seattle’s resilience and the Rangers’ one vulnerability, the bullpen. But it was still a loss, which reflected a bit poorly on Servais’s pre-game forecast that he felt the Mariners were on the verge of a breakout.

“I think we’re on the brink of putting together a really good streak here,” he said. “Streaks are driven by starting pitching, and you talk about winning eight out of 10 or nine out of 11, I really feel we’re about to go off on one of those runs.

“We’ve got our full squad back, position-player wise, we’re pretty healthy there. But our starting pitching is starting to get back on track, (and) that excites me as much as anything.”

Asked to elaborate, he said, “James Paxton. Taijuan Walker. Really starting to get it going again. I think Paxton’s been outstanding. He’s really pumped some life into our starting pitching. Walker getting back on track.

“Wade’s going to give us a good outing today. (Hisashi Iwakuma) has been pretty solid throughout. It is starting pitching that drives it, and I feel good where we’re at right there.”

One game into his forecast, Servais is behind. He made a rookie-manager mistake in letting his talk get ahead of himself and his team. He prediction could end up right, but baseball is the most inherently unpredictable game.

Evidence for that was presented Saturday night and again Sunday afternoon, when there was no backup to make sure Cano was properly zipped, velcroed and dressed for work.