Leo Messi, soccer’s most electric star, will light up CenturyLink Field Tuesday night against Bolivia in the Copa America tournament — if health permits and fans get their wishes. 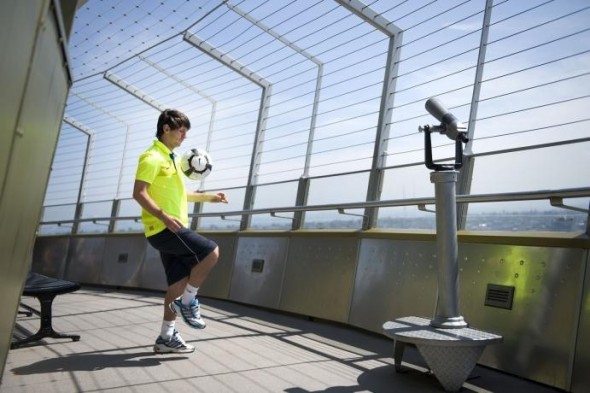 In 2009, Lionel Messi took the chance to do some juggling atop the Space Needle during his first trip to Seattle. / Seattle Sounders FC

Lionel Messi, one of the most visible athletes in the world, may grace the pitch at CenturyLink Field for the second time in his career Tuesday, when his native Argentina faces Bolivia in the final match of the group stage of the Copa America Centenario. A once-in-a-generation talent, Messi’s star power was counted on to help appeal to the American market.

Soccer fans need no introduction to La Pulga Atomica, the Atomic Flea, as Argentina fans have nicknamed him. Even those who scoff at the sport recognize the soft-spoken Argentine, be it from Nike commercials, endless highlight reels or the immortal rivalry with soccer’s ultimate playboy, Portuguese superstar Cristiano Ronaldo.

As soon as it was announced that Seattle would play host to Argentina, one of the most storied teams in the history of international soccer, the buzz in forums and bars frequented by the local soccer faithful focused on one man.

“Do you think Messi will play?”

“How many goals will Messi score?”

Messi’s arrival suddenly might be overshadowed by the certainty of the USMNT’s quarterfinal match in Seattle against Ecuador Thursday. But for some, the chance to see one of the greatest to play the game in a serious competition may match the excitement of seeing the national team play.

Messi is not a lock to see the field Tuesday. He sat during Argentina’s first match with a lower back injury. Now that Argentina has all but locked up the top spot in group D, little stands to be gained from risking Argentina’s brightest star against 0-2 Bolivia.

Yet the potential will be enough to draw a crowd by itself. Friday, when he came on against Panama in the 61st minute at Chicago’s Soldier Field to thunderous applause, he needed 26 minutes to score a hat trick in a 5-0 dismantling of the Panamanian national team.

Messi’s personal drive is intense. He played for the youth academy at Newell’s Old Boys at six and went on to score more than 500 goals in his six years at the club. At 10, though, his future was threatened when doctors discovered he had a growth hormone deficiency.

Luckily, he had relatives in Catalonia, leading to La Liga’s Barcelona making an offer to sign the young player. He enrolled at La Masia, the club’s youth academy, at 13, where he underwent hormone treatments.

From there, Messi’s rise to prominence was unstoppable. Surrounded by the best teammates money could buy, the 5-foot-6 Messi always stood out. Dribbling past defenders as though the diminutive midfielder was a giant among schoolboys, he scored goals that left heads spinning. Messi, 28, accrued a record five Ballon D’or awards, reserved for the best player in the world, within the past seven years.

Argentina is no one-trick pony, and has many strong attacking options besides Messi. Yet no one in the world can match Messi’s influence and capacity to draw a crowd. His mild-mannered nature has made him popular, even amid a tax evasion scandal that has followed Messi the past year.

From the standpoint of the cynic, standing to the side and observing the proceedings and profit margins of modern major tournaments, it’s possible to say that Messi’s popularity is cooked up by FIFA due to his likeability and marketability.

That opinion cannot survive seeing Messi dance his way down the pitch, seeming to invent new moves as he baffles defenders and draws delighted gasps from witnesses. FIFA knows Messi is a cash cow. But the financial value of his easygoing nature is second to the value of his creativity and quick thinking on the field as he imposes his will over the course of 90 minutes.

When Messi last played at CenturyLink, during a friendly against the Sounders in 2009 when Seattle was a fresh-faced expansion club in MLS, Messi scored two goals in the first half for Barcelona before leaving the pitch. If he returns against Bolivia, it seems almost certain that he will score at least one more, so great is his talent and force of will.

Soccer fans in Seattle will turn up Tuesday, hoping for a chance to see one of the sport’s greats spread the same on-field gospel that he does at Camp Nou, one of soccer’s grandest cathedrals. An Argentina match without Messi is still entertaining soccer, but a match with him, especially at international tournaments, is a chance to witness sports history.