With 94 home runs in 63 games, the Mariners are on track to hit 241, which would place them in company the Ken Griffey Jr.-Jay Buhner Kingdome teams of the late 1990s. 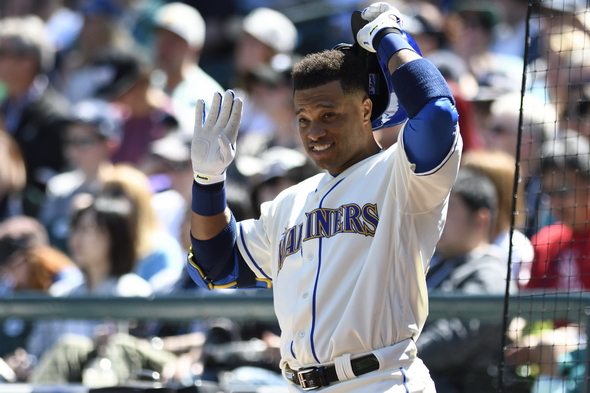 Rewind to April 6, when the Mariners completed a 2-1 series win at Globe Life Park with a 9-5 victory over the Texas Rangers. In that game, Robinson Cano homered in the first inning and again in the ninth, giving him four long balls in the season’s first three games. The significance: no player in franchise history, not even Ken Griffey Jr., had ever hit four home runs in the first three games of a season.

With those two blasts, Cano also became one of two second basemen in major league history to homer at least four times in his team’s first three games, joining future Hall of Famer Bobby Doerr, who had a quartet in the first three of the 1941 season for the Boston Red Sox.

Cano’s rejuvenation has gone a long way toward placing this Mariner club on track to become the most prolific long-ball outfit in the Safeco Field era (since mid-1999). That’s actually not a huge feat considering that the Mariners moved the fences in by as much as 17 feet in some places following the 2012 season.

The Mariners hit 51 home runs in their first 33 home games, which projects to 125 for 81 Safeco dates. The Mariners have never hit more than 90 in a season under the new ballpark configuration. Overall, this is how the Mariners compare through 63 games to the other editions of the club since Safeco was re-formatted four years ago:

Remarkable about this Mariners team is that it could wind up hitting more home runs than all but three others in franchise history, a total it’s probably going to need if it hopes to overtake Texas  — not a bright prospect after losing five of their past six to the Rangers — in the AL West.

With the exception of Nelson Cruz, who arrived in Seattle with a home run history and belted 44 last year, this Mariner sclub was supposed to feature gap-hitting small-ballers. Instead, this is how it ranks among the best homer-hitting clubs through 63 games in team annals:

The Griffey-Martinez-Buhner teams played in the smaller, warmer, dead-air Kingdome, where homers were relatively cheap, vs. the expansive and cooler Safeco Field, where heavier, cooler air makes the park pitcher-dominant.

According to ESPN’s Park Factors, in the three seasons since the Mariners shortened the fences, Safeco has ranked as the game’s worst venue for extra-base hits and only slightly more favorable for home runs. Yet, this Mariner club has had little difficulty poking the ball out of the place, or any place, for that matter.

This Mariners would seem unlikely candidates to duplicate the home run production of the 1997 team, which had an American League-record 264. That club featured the third-highest all-time total  — 96 — by two teammates, Griffey with 56 and Buhner 40. With 1B Paul Sorrento adding 31, the Mariners became only the second AL team with three players exceeding 30, joining the 1964 Twins.

On the other hand, who knows? These Mariners are on pace to duplicate the 1997 club’s feat of nine players with 10 or more homers (five already have 10 or more). And Friday, for the fourth consecutive game, a different Mariner hit two home runs. No team in major league history had four different players hit multiple home runs in four consecutive contests in the same season,  as did Cruz (June 7 vs. Cleveland), Chris Iannetta (June 8 vs. Cleveland), Cano (June 9 vs. Cleveland) and Dae-Ho Lee (June 10 vs. Texas).

While Cano’s surge is almost entirely attributable to the return of his health, at least some of Seattle’s newly found power may stem from the emphasis GM Jerry Dipoto and manager Scott Servais have placed on controlling the strike zone. But the resurgence actually started before the Mariners hired Dipoto to replace Jack Zduriencik, and Dipoto tapped Servais to take over for Lloyd McClendon.

Last June 20, the Mariners hired Edgar Martinez as team’s batting coach, replacing Howard Johnson. Seattle played 68 games when Martinez returned to the dugout. This is how Seattle performed under Johnson (remember, Cano was hurt) and how it has performed since Martinez took over (R=runs per game):

Martinez had a mastery of the strike zone back in his day. Apparently, Martinez could not only do, he can teach.

The Mariners begin a 10-day, 10-game road trip Tuesday night with the first of three against the Tampa Bay Rays at Tropicana Field. RHP Taijuan Walker (3-6, 3.48) will lead it off for Seattle opposite RHP Jake Odorizzi (3-3, 3.47). Following the trio in Tampa, the Mariners will play three in Boston and four in Detroit before returning to Safeco Field Friday, June 24 for a three-game series with the St. Louis Cardinals.