The Seattle Sounders face the Kitsap Pumas, a fourth-division team from Bremerton, WA in the Open Cup Wednesday 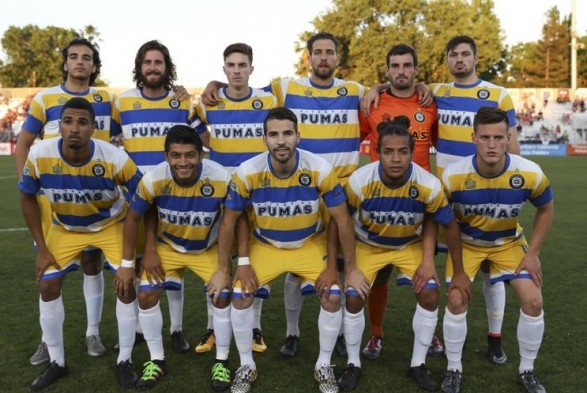 The Kitsap Pumas are a small club with big hopes for their match against the Sounders. / Sacramento Republic FC

The Kitsap Pumas, a Premier Development League team from Bremerton, will face the Seattle Sounders in the fourth round of the Lamar Hunt U.S. Open Cup at Starfire Stadium in Tukwila at 7:30 p.m. Wednesday. The Pumas, who play in the fourth division of the American soccer pyramid, are long odds to beat a Seattle team that has won the Open Cup four times since it joined MLS in 2009.

Kitsap earned the right to face the Sounders with a surprise 3-1 win on the road against Sacramento Republic FC June 1. Sacramento, a powerhouse in the USL (the third division of U.S. soccer) since joining the league in 2014, seemed like a sure thing to defeat the smaller professional team.

A flurry of four goals in a five-minute window, however, left home fans marching to the parking lot early, confused at their undoing.

Pumas head coach Cameron MacDonald said Wednesday’s match represented a tremendous opportunity for his players to test themselves against one of the best teams in the country — one of 16 matches that pit MLS teams against lower-division foes.

“The guys have done fantastic to earn the right to compete with an MLS side,” said MacDonald Monday. “We need to do everything right to be successful. We need to have the game of our lives and hope that the Sounders have an off night.

“All the pressure is on them, to come out and be professional and move on. Our guys have the freedom, where there aren’t such high expectations, to express themselves. If they work hard and play to the best of their abilities, then you never know.”

On paper, the Sounders should not be seriously troubled by Kitsap. The disparity between the two teams, their stadiums, and their resources are stark.

A few months ago, Seattle was generally considered MLS’s best chance to make a serious run in the CONCACAF Champions League against Mexican giant Club América. The Pumas, meanwhile, were holding open tryouts and trying to attract free agents that hadn’t caught on at higher level clubs.

Yet the game will be played on turf at Starfire, not on paper. While the Sounders are likely to win, the Pumas have given them trouble in the Open Cup before.

The sides met in 2011 in the third round of the Open Cup,  when Seattle University men’s soccer coach Pete Fewing helmed the Pumas. The game finished 2-1 in favor of Seattle thanks to a brace by Mike Fucito, but the Pumas gave the Sounders more trouble than they expected. Fewing’s Pumas went on to win the PDL national championship, while the Sounders won the Open Cup.

The quality of MLS teams has skyrocketed since 2011, and the Sounders are no exception. Still, Sigi Schmid made it clear his team wasn’t underestimating the club from across Puget Sound.

“It’s the beauty of the David versus Goliath thing — people like that,” said Schmid. “For us, it’s a round-of-32 Open Cup game that we need to get past. If you look past your opponent, it’s going to be a difficult game.”

Sounders forward Herculez Gomez remembers what it feels like to face overwhelming opposition, thinking back to a 2005 friendly against Real Madrid from his time at the Los Angeles Galaxy.

“The first time we lined up against Real Madrid, there was Ronaldo, Luis Figo, Iker Casillas, Beckham, Zidane,” said Gomez. “It was an exhibition, but it was definitely an underdog feeling. You try to enjoy it because it’s not every day you get to be with players of that caliber.

“I don’t know if the Pumas kids are going to be feeling that against us, but we do do this for a living. I’ve been in that position where you don’t have the resources or the facilities that we have. It’s difficult, but it’s a great emotion. You feel like you’re a step closer.”

The step closer is what most players in the Pumas locker room are excited about. MacDonald makes it clear that he sees the Pumas  as a stepping stone for his players, and values his role trying to develop talent that will go on to play at the next level.

“Being in the PDL, we get to help young professionals journey to the top of the table,” he said. “We take guys who are not as quality, and help refine their game. With guys who have lots and lots of potential, often there’s just one or two little flaws these guys have in their game. We give them the platform to showcase themselves and hopefully improve.”

Wednesday’s game, which will be live-streamed on the Sounders website, will be a huge platform for the Pumas players. The match has attracted interest around the country. Curious observers and other teams may tune in to see how the underdogs fare against Seattle.

The Sounders themselves may watch closely their opposition. When the Pumas ended their season last year, Sounders 2, which had ousted Kitsap from the Open Cup, signed three of its players on loan for the remainder of its season.

Ninety minutes isn’t a long time to make a lasting impression. Whether the Pumas as a team or individual players manage the feat, the unique opportunity to play against superior opposition is one of the joys of the Open Cup, a moment none of Kitsap’s players will soon forget.

(Full disclosure: Andrew Harvey works as the play-by-play voice of the Kitsap Pumas)