The two Seahawks most outwardly dismayed at their contracts, Kam Chancellor and Michael Bennett, both said all the right things at mini-camp about putting the team first. For now. 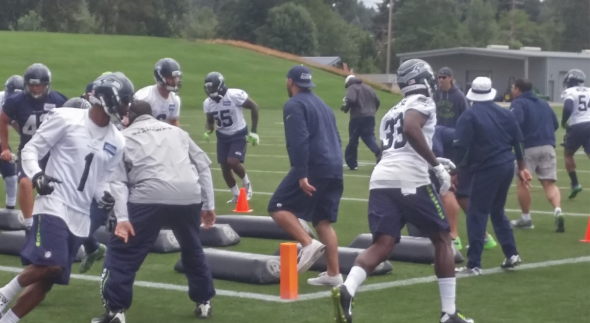 What it’s like at mini-camp in June: Much padless running to and fro. / Art Thiel, Sportspress Northwest

Relative to the past season, when they grumbled and groused through spring and summer about their contracts, the anchors of the defense betrayed no willingness on the first day to further roil the waters of the system.

Whatever that means. Everyone thought Chancellor was in a good place in July, but he surprised all with a holdout, disrupting Seahawks plans and contributing to the team’s slow start.

He and Bennett outperformed their contracts and wanted the Seahawks to re-do their deals, but ran into club policy that was concrete-firm in refusing such a precedent.

Just as unhappy, Bennett decided he couldn’t hold out, he said last season, because “my wife told me get my butt in there.”

Tuesday, Bennett, almost shyly for him, explained that he just wanted “to be a great teammate — show up, show my support, do everything I need to do” to help the Seahawks get the Super Bowl in Houston, his hometown.

But after some prodding about the state of his contract, he allowed as to how he was trying to ignore the situation by paying attention to more worldly matters, such as presidential politics.

“You pay attention to too many contracts (0f other NFL defensive ends getting more money), it hurts your stomach,” he said. “It’s like seeing your favorite girlfriend getting married to somebody else.”

Well, that’s more like it: A Bennett love analogy to explain pain.

If both guys were honest, they would say they feel had. But since Bennett this season will make $7 million and Chancellor $6.1 million, any public dismay about their circumstances is likely to be less than warmly embraced.

There was actually news regarding Bennett: An ankle injured during a workout is likely to keep him out of this three-day padless exercise. But it wasn’t serious enough to even fake a limp as he emerged from the locker room halfway through practice.

He didn’t seem broken up about the pending absence.

Looking at reporters, he said, “I’ll be your standup comedian the rest of the week.

“People pay a lot to see comedians of my stature.”

They pay even more to see him knock down quarterbacks. But for the coming season, the pay is better elsewhere.

But then, the decent chance for a free trip back home to Houston has to be worth something.

No deal for Nate Robinson

Nate Robinson had an “impressive” workout with the Seahawks Monday, according to his agent. But as expected, it was not enough to bump a player from the 90-man roster to make room for him to fulfill his NFL fantasy as a cornerback.

“He is a great kid. I have known him for a long time, way back when, always loved the kid,” coach Pete Carroll said after practice. “I am excited to give him a chance and see where this all fits together for him and we’ll find out down the road.”

Really? Carroll then suggested the tryout was more of a courtesy gesture.

“I think it is all but impossible,” he said. “It is as hard as you can possibly get. He is 32 as well, I don’t know if anyone could do it. But if anyone could, it might be Nate. He is a versatile athlete and a great competitor.”

Agent Aaron Goodwin told TMZ Sports that Robinson “may go back later. He’s going to focus on being ready for that opportunity, should it occur again, or an NBA opportunity.”

Robinson was a two-way, All-State football player for Seattle’s Rainier Beach High School. He went to the University of Washington on a football scholarship, but has not played since 2002, his freshman year at Montlake, where he started six games at cornerback.

After switching to basketball, he was a first-round NBA draft choice and spent 11 seasons in pro hoops with eight teams.

“He wants to play basketball,” Goodwin was quoted as saying, “but will play football if the opportunity presents itself.

“He’s a world class athlete and just wants the opportunity to continue to play.”