Klinsmann: ‘Biggest game of the year’ in Seattle 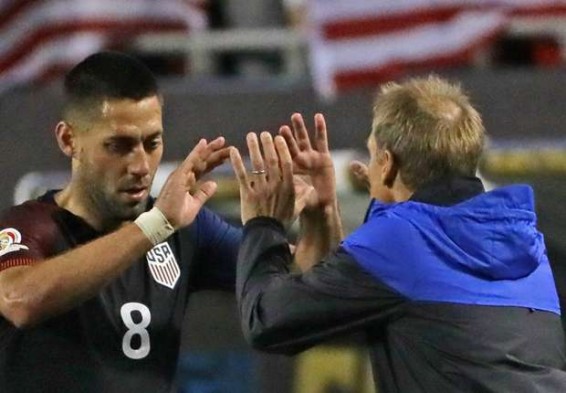 Sounders star Clint Dempsey and and USMNT coach Jurgen Klinsmann know that playing in Seattle is a big help. / Goal.com

“It is huge,” said USMNT coach Jurgen Klinsmann, “to be here in Seattle.”

For Seattle, the only down note is that USMNT will be without DeAndre Yedlin, the former O’Dea High School and Sounders star who received two yellow cards in the team’s final group stage match against Panama.

Yedlin will be observing the game from a suite, having committed a pair of bone-headed tackles within a one-minute span against Panama. The U.S. held on despite having 10 men on the field, and claimed the top spot in group A after Costa Rica handed a stunning 3-2 defeat to Brazil.

Ecuador reached the knockout round with a pair of draws against Peru and Brazil, and a 4-0 drubbing of Haiti in group B. The squad might not boast the star power of some of the tournament teams, but will be a formidable opponent that will capitalize on any U.S. mistakes.

The U.S. survived a humiliating 2-0 loss to Colombia that opened the tournament. A 4-0 trouncing of Costa Rica and a 1-0 defeat of Paraguay gave the Americans the points needed to go through to the quarters.

The USMNT-Ecuador winner will advance to the semifinals to meet either Argentina or Venezuela Tuesday in Houston. The USMNT is 7-1-1 all-time in Seattle, including a 2-0 win over Panama in a 2013 World Cup qualifier against Panama at the Clink.

Dempsey has been a star in the last two matches, scoring twice and assisting on two more goals.

“This is Copa America, right below the World Cup. This is what you want to see as a soccer fan.”

Klinsmann’s comments are likely a nod to the fact that CenturyLink Field is normally a turf field, and therefore seldom selected to host important international matches.

The grass laid over the turf for the Copa America has held up well for two matches, but Thursday’s final match will be an important milestone for the option of laying grass over turf.

Tournament officials will be hoping for an attendance that surpasses the 45,753 that came out to see Argentina star Lionel Messi play Tuesday night in a 3-0 win over Bolivia. But high ticket prices, especially on the secondary market, may conspire to keep some fans away.

A successful outing Thursday means a trip to the semifinals, a rare feat for the U.S. in a senior tournament. A boost from a big crowd and natural grass surface mean greater consideration for Seattle for future high profile international matches.