Sounders face RSL in fifth round of Open Cup

Cristian Roldan scored the game winner in a match that was much closer than many imagined it would be between the Kitsap Pumas and the Seattle Sounders in the U.S. Open Cup 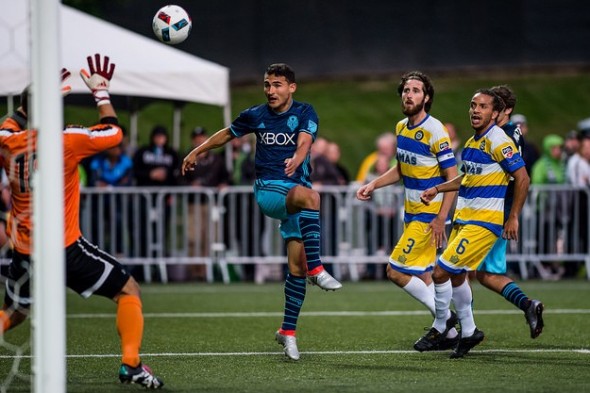 The fourth division Kitsap Pumas held the Seattle Sounders scoreless through 70 minutes of play in front of a capacity crowd at Starfire Stadium Wednesday, but a pair of late goals was enough to see the MLS side through to the fifth round of the Lamar Hunt U.S. Open Cup.

The game was a back and forth affair for the first half, with Kitsap surprising the hosts with its capacity to move the ball through the midfield. The Sounders, largely fielding a B team, were reliant on long balls attempting to catch the Pumas off guard.

Late in the half, Seattle midfielder Nathan Sturgis collided with Kitsap keeper Matt Grosey, going down hard and lying motionless for several minutes while trainers tended to him. Sturgis eventually walked off, returning to finish the first 45.

Erik Friberg replaced Sturgis before the start of the second half, and the veteran Swede’s presence made a radical difference in the composure and coordination of the Sounders midfield.

The breakthrough came in the 71st minute. A cross into the box took an awkward deflection off Aaron Kovar, before bouncing off Cristian Roldan. The ball caught Grosey off guard, floating into the far side of the net to put the Sounders up, 1-0.

Joevin Jones added a second for the Sounders, who took advantage of the Pumas as they stretched their lines to push for an equalizer. A Friberg through ball on a counterattack put Jones one-on-one with Grosey, and Jones neatly finished the ball to the left side of the net to put the match out of question.

The Sounders face Real Salt Lake in the fifth round of the Open Cup, as determined by Thursday’s draw. The Utah club will host Seattle June 28.

(Full disclosure: Andrew Harvey works as the play-by-play voice of the Kitsap Pumas)