A part of the Copa America Centenario was claimed by Seattle Thursday night as a raucous crowd celebrated a 2-1 win over Ecuador that included a goal and assist from the Sounders’ Clint Dempsey. 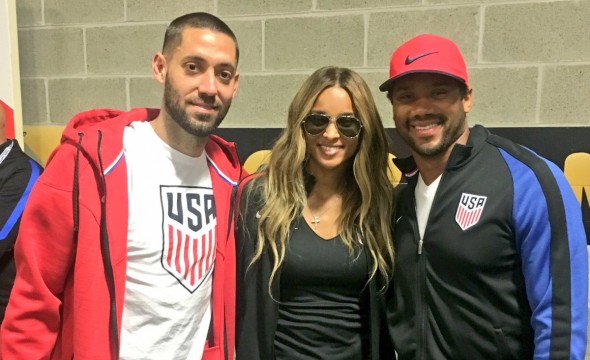 Clint Dempsey, Ciara and Russell Wilson got together Thursday for a pre-game strategy talk, which apparently worked. / SoundersFC.com

Hey, thanks, South America, for loaning the U.S. your soccer championship this year. So far so good, from us here in Seattle. The three Copa America Centenario matches at the Clink were entertaining — hey, more than 96,000 showed up — particularly the part Thursday night where there were ejections, scuffling, dubious officiating and general disorder.

Anytime you can induce U.S. Men’s National Team coach Jurgen Klinsmann to call an officiating call “an absolute joke” and “a disgrace,” well, it makes us in Seattle, a home to Pac-12 Conference officiating, feel comfortable.

Letting the local hero, the Sounders’ Clint Dempsey, carry the event was a nice touch.  Thanks. We hope you enjoyed our supply of green grass, blue skies and long daylight. Too bad about Ecuador losing 2-1, but the soccer giants can’t always win, even against the doughty little USA.

Feel free to loan us your tournament as often as you want. Especially if you were to have the U.S. win the whole thing. The Yanks are booked into the Copa semifinals against the winner of the Argentina-Venezuela match Saturday, likely as a huge underdog.

But what the heck, Ecuador was supposed to be a bully too.

U.S. men’s soccer traditionally doesn’t do big international tournaments well. But based on Thursday’s outcome, things may be changing.

“We made a huge step forward,” said Klinsmann, with whom critics were having their way after opening the tourney with a 2-0 loss to Colombia. But the Stars and Stripes strung together tidy work against Costa Rica, Paraguay and now Ecuador.

Especially with Dempsey leading the way. Dempsey too, was under criticism from those who thought that he was, at 33, past his prime and taking up prime real estate on the U.S. roster that could have gone to younger players.

“I’m not worried about that — I go out and perform,” Dempsey said after the match. “That’s what I’ve always done. Hopefully there’s more games left in me where I can keep getting goals, contributing in a positive way.”

In fact, he’s scored in each of the three Copa wins, including the Thursday opener in the 22nd minute when he snapped a header from 10 yards past GK Alexander Dominguez. He also assisted on the second score at 65′ when Gyasi Zardes, by day a formidable rival with the Los Angeles Galaxy, tapped in from inches a Dempsey grounder that may have gone inside the far post on its own.

Each moment caused a civic eruption from the 47,322 attendees, who were decidedly pro-U.S. — a marked contrast with many American venues hosting international games that get filled with fans of the visiting team(s).

Not this night. Not in Seattle. Not with Dempsey in charge.

“His performance was unbelievable in front of his home crowd,” Klinsmann said. “Very special.”

Same was also noted from from Klinsmann’s Ecuadorian counterpart.

“We were thinking about number eight,” said assistant coach Luis Suarez (no, not that one). “Number eight and number four (captain Michael Bradley) were doing everything for them.”

As much as Dempsey did, Ecuador in the second half slashed away with a fury that produced a set-piece score at 74′ by Michael Arroyo and numerous other late threats that left the crowd gasping.

“I thought we played well, created some chances and had good looks in front of the goal,” Dempsey said. “Unlucky not to score more. The second half wasn’t as pretty. We didn’t keep possessions as well. It’s always was nail-biting when you can see the goal, and they still had some good chances to equalize it.They do that, it looks like it might go into (penalty kicks).

“At the end of the day, I thought we deserved to win. We find ourselves in the semifinals.”

The semifinals and finals will be contested elsewhere in the fruited plain. Pity.

Seattle seemed to be getting the hang of being a soccer capital of South America.