USMNT holds on late to move on in Copa tourney

The U.S. defeated Ecuador in the quarterfinal of the Copa America Centenario Thursday. The USMNT is 6-0 all-time in non-friendly matches in Seattle. 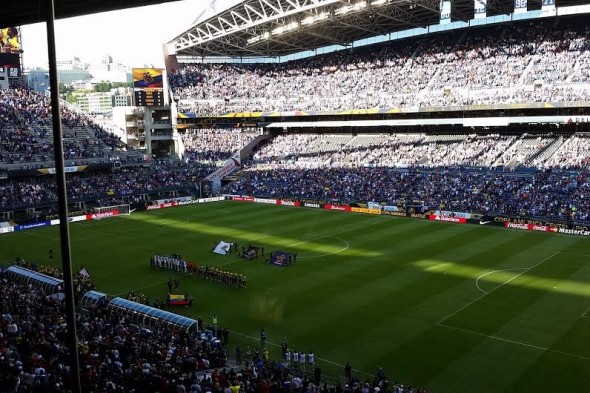 In front of a crowd of 47,322 at CenturyLink Field Thursday, the U.S. Men’s National Team pulled off a historic 2-1 win against Ecuador in the quarterfinal of the Copa America Centenario, hanging on late in the game when Ecuador poured on pressure. Both sides finished with 10 men after Jermaine Jones and Antonio Valencia were sent for their parts in a fracas in the 52nd minute.

Jurgen Klinsmann said the win was a step towards the success the national team has been seeking.

“Before, when we talked about the magnitude of this game, I didn’t talk much about Ecuador, because I didn’t want to make them too big,” said Klinsmann. “(Ecuador) is damn good. This team is leading World Cup qualifying in South America, so it was not by accident that they put us into big difficulties at the end.

“Our program is maturing, our players are maturing. They are learning with every game that we can play in this type of environment. This is what we hoped for after breaking through in Brazil (in the 2014 World Cup), getting out of the group of death . . . we brought a few youngsters along the way the last few years, and they made a huge step forward tonight.”

One such youngster was 23-year-old forward Bobby Wood, who distinguished himself with his skill and physical presence in control of the ball, and by drawing Ecuador’s center backs to him in order to make room for Clint Dempsey.

Dempsey capitalized quickly. In the 22nd minute, he leaped to meet a cross from Jones, redirecting the ball back across the net to put the hosts up 1-0.

Both teams were reduced to 10 men before the U.S. scored again. Valencia, already on a yellow card, tripped Alejandro Bedoya along the sideline as Bedoya pulled away. While the referee came over, pulling the yellow card from his pocket, a shoving match ensued as players from both teams coalesced in front of the benches.

In the mosh, Jones gave Ecuador midfielder Michael Arroyo a half-shove, half-jab that caught Arroyo lightly on the chin, directly in front of fourth official Wilton Sampaio. Referee Wilmar Roldan showed Jones the straight red as a consequence, sending him marching after Valencia up the tunnel.

“It’s an absolute joke. The fourth referee made that decision, not the referee, the referee didn’t see it. He followed the advice of the fourth official, and it’s a disgrace, a decision like that.”

The assistant referees and fourth officials are meant to act as extra eyes to pick up what the referee cannot, and to advise the referee if misconduct occurs. Famously, Zinedine Zidane was sent off in the final of the 2006 World Cup for headbutting Italy’s Marco Materazzi, an act witnessed only by the fourth official.

Klinsmann may have meant that the contact from Jones to Arroyo was light, and not worthy of a straight red, but traditionally any violent act aimed at the head of an opponent, regardless of its viciousness, can be interpreted as grounds for a send-off.

Before Jones was off the pitch, a bizarre sequence occurred. Play seemed to resume with Jones still on the pitch. Wood went in for a reckless challenge against the ball-carrier, and received a yellow card and ban for the semifinal for the foul.

Gyassi Zardes added a second goal in the 65th minute, heading down a cross for Clint Dempsey, who shot the ball past keeper as he fell over with a defender. The ball looked as if it would hit the net, but Zardes, with a defender at his back, removed any doubt as he tapped the ball in.

Ecuador pulled a goal back in the 74th minute, when a set piece cross found Arroyo unmarked at the top of the penalty area, and his shot snaked its way through the defenders and U.S. keeper Brad Guzan.

Ecuador bore down, forcing the United States onto its heels. Several times, defenders blasted nerve-rattling balls away from the goal. Ultimately, the U.S. prevented a second goal, improving to a perfect 6-0 in non-exhibition games in Seattle.

The match exacted a toll, however. Jones and Wood will both be absent for the semifinal match Tuesday against the winner of Saturday’s Argentina-Venezuela quarterfinal (4 p.m., FX). Joining them will be Alejandro Bedoya, who received his second yellow card of the tournament in the 73rd minute.

The loss of Wood will be particularly painful, given the emotionally charged nature of his yellow card, similar to the two fouls in a 60-second window against Paraguay that cost former Seattle Sounder DeAndre Yedlin his chance for a homecoming party Thursday.

The cards to both players indicate that some younger players still have trouble keeping their heads in the high-stress situations that are inevitable in the later stages of major senior tournaments.

Zidane, one of the all-time greats, lost (and used) his head in such a situation. It’s still fiercely debated whether or not it cost France a World Cup title, but the ability for the USMNT’s younger players to outgrow moments like that will be crucial to the team’s long term success and dreams of chasing titles.

For the moment, though, the U.S. can celebrate advancing to the semifinal round for the second time in its four appearances in the Copa America. Those who had called for Klinsmann’s head will, at least temporarily, find a new reason to disparage his decisions.

If the U.S. can keep its collective calm, potentially staring down Argentina, the number one team in the world, according to FIFA rankings, then its preparation for future World Cups and international glory is certain.