Another injury, this one a shoulder problem for starter Wade Miley, caused the Mariners to reshuffle the pitching staff. They called up two relievers and sent out reliever Steve Johnson. 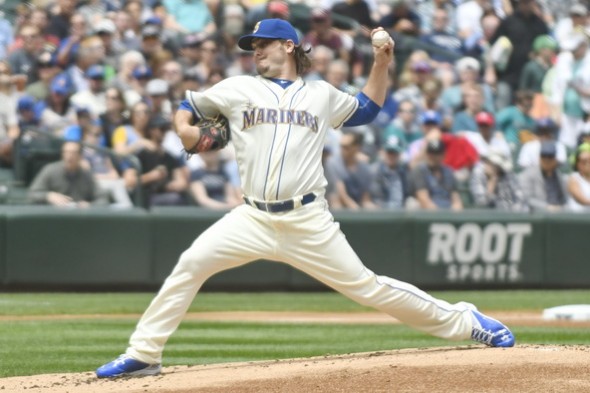 Wade Miley is on the 15-day disabled list with a shoulder impingement. / Alan Chitlik, Sportspress Northwest

The Mariners Friday recalled RHP Jonathan Aro and LHP David Rollins from AAA Tacoma, placed LHP Wade Miley on the 15-day disabled list retroactive to June 13, and designated RHP Steve Johnson for assignment. Aro and Rollins will be available to the club Friday when it opens a three-game series against the Boston Red Sox at Fenway Park.

Miley joins another starter, Felix Hernandez, on the DL. The news comes after Taijuan Walker left Tuesday’s game in Tampa early with a foot injury, although he is expected to make his scheduled start Sunday.

Also flying into Boston Friday was Adrian Sampson, 24, who is likely to be put on the roster to start in Miley’s place Saturday. Sampson was going to pitch Sunday for Tacoma. In 13 starts for the Rainiers, he’s 7-4 with a 3.25 ERA. In 80.1 innings, he’s struck out 61 batters and walked 13.

Sampson is a graduate of Skyline High in Sammamish and Bellevue Community College and would be making his major league debut.

Adding Sampson to the roster was not done Friday because the Mariners may need Aro, Rollins or both Friday to help an overworked bullpen. Either Aro or Rollins likely will be sent down to make room for Sampson, unless Friday events dictate otherwise.

Miley, 29, has a left shoulder impingement. He was acquired from Boston Dec. 7 (with Aro) in exchange for Roenis Elias and Carson Smith. This season Miley is 6-3 with a 5.28 ERA in 13 starts. He won six decisions in a row over nine starts from April 24 to June 7.

The Mariners have 10 days to trade, release or outright Johnson to the minors.