Thiel: Blazers to Seattle? Ha. But to Root TV?

With the Blazers’ hire of Kevin Calabro, a Portland columnist speculated that Blazers owner Paul Allen might have an agenda to move the team. More likely, it’s to get more fans to watch on TV. 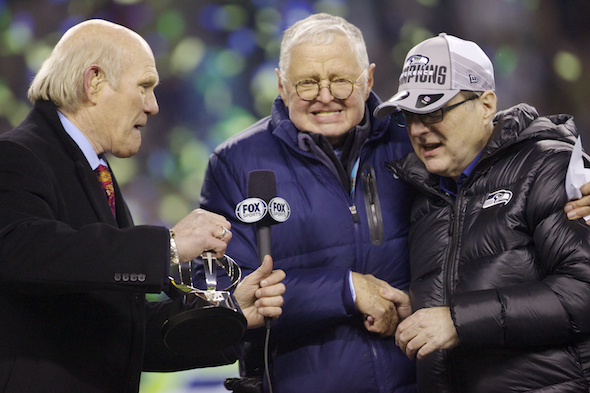 Not only did the NBA Finals’ storylines seduce even the crustiest Seattle cynic, who learned to dismiss pro hoops because of the dubious dealings of David Stern, the NBA-free town found out this week that the beloved voice of the Sonics, Kevin Calabro, was hired to be the TV play-by-play man of the Portland Trail Blazers.

Those who still pine for the Sonics had a double-tug on the eight-year-old scab: Not only was the NBA still compelling theater, one of the last remaining figures of the Seattle era was pulling out of town to work for the one-time rival, further dampening hopes of a Sonics return before the sun goes supernova.

Add one more tug Wednesday: The NHL announced it will expand, by one team, to Las Vegas in 2017.

While no surprise, given the completed arena without an anchor tenant, the award confirmed the expansion fee of $500 million was priced right. That makes any bid for an expansion team for the Seattle market, be it via a theoretical, hockey-first arena in Bellevue, Tukwila or Chris Hansen’s ember-sized hopes for a Sodo site, that much more spendy.

Calabro offered a highly entertaining thread that wove through 21 years of Sonics feats and failures. He became one of the best in his craft, as evidenced by his numerous national and regional broadcast gigs since the 2008 poach of the Sonics to Oklahoma City by Stern’s BFF, Clay Bennett. So Calabro’s decision to take up with the Northwest rival strikes at the fading heart of Sonics adherents.

But when the richest owner in sports, Paul Allen, makes an offer, Calabro understood that tying his boat to a sunk dock was no longer a good idea.

However, Calabro’s departure for Stumptown inspired Oregonian columnist John Canzano to speculate that the hire was an odious sign that Allen, a Seattle native, resident and advocate, still has fiendish plans to someday move the Blazers north.

Even though the Blazers have a lease with Moda Center (formerly the Rose Garden) until 2023, Canzano can’t get past Allen’s roots — despite the fact that Allen has had a mostly successful tenure since his 1988 purchase of the franchise. Canzano listed some Seattle-related hires, such as Nate McMillan as coach, and drafting Seattle players Martell Webster and Brandon Roy, as evidence for his suspicions.

“Yes, Allen loves him some Seattle,” Canzano wrote. “And for reasons that are understandable to little brothers everywhere, Portland mostly does not. Which is only to say, it feels like we’re approaching a standoff moment.”

Well, actually, no. I understand the little-brother analogy, but Canzano might want to call Ghostbusters before yelling “Poltergeist!”

The main point: Not only does the NBA shudder at the thought of another relocation, the NBA loves Portland and hates Seattle.

Commissioner Adam Silver and the owners don’t necessarily love Portland because of anything the fans do, or because the honchos want to windsurf the Columbia Gorge. They love Portland because it’s a one-horse town. As with Oklahoma City, Salt Lake City, Sacramento, Memphis, San Antonio and Orlando, there is no competition from the NFL, MLB and NHL. Monopoly is a sports league’s best friend.

In good years, competition usually is not a problem for the NBA. In bad years, such as the final 10 in Seattle when the Sonics won one playoff series, many sports fans who have choices will take them.

As for the NBA’s contempt for Seattle, we all know that the City Council’s recent rejection of Hansen’s proposed street vacation for his arena project was the latest in a string of setbacks for the NBA in its attempt to extort public funds here. Be it from city or state, by ballot or policy, Seattle proudly said, “Drop dead!” to the NBA, which took the hint — and the team.

Now, of course, an empty Seattle market is worth more to the NBA than an occupied Seattle, because relocation has been used as a threat by the NBA to extort public money for new arenas in Sacramento and Milwaukee.

And who knows? Maybe Portland.

KeyArena and the Rose Garden came online in 1995, but the Portland gym was bigger and better on many counts. Yet it is 21 years old — think of pro-sports arena life-spans a little like dog years — and at some point will need either another upgrade or a replacement. As long as Seattle is empty, it’s a help to Allen if he wants to mess with Portland’s politicians.

So Canzano’s suspicions will be a small help in advancing any ambition Allen has to test Portland’s allegiance. Allen’s argument prior to lease expiration could be that if he is asked to fund all or most of a new arena, he may as well do it for his hometown.

But that is a ways off. More immediately, where Calabro’s hire does resonate is with ambitions the Blazers have to reach into the western Washington TV market.

The Blazers are in the ninth of a 10-year, $120 million deal with Comcast Sports Network to telecast most games. The parties have an exclusive negotiating window through the summer to strike a new deal, according to the Portland Tribune.

But the relationship in the past has been rocky, primarily because Comcast’s wires fail to reach many fans outside metropolitan areas. Comcast has few deals with other cable providers and none with DirecTV, the satellite outfit that reaches all smaller towns and  rural areas.

If talks falter, the Blazers may look north to the only other regional sports network, Root Sports. The Mariners have majority ownership in Root, but besides some Sounders and Timbers MLS games, offers little other content of large interest.

The minority share of Root remains owned by DirecTV, which carries Mariners games throughout the Northwest. Since Root wants profitable winter programming, and the Blazers want a greater audience as the Northwest’s only NBA team, it seems that Comcast, whose national base is steadily eroding thanks to cord-cutting, might be in a tough spot to keep the Blazers.

Especially if the friendly face of Calabro is telling longtime Sonics fans in the populous Puget Sound market it’s OK to enjoy the Blazers.

For the Mariners, it couldn’t be better if the Blazers moved to Root. They would have a second pro sports schedule to sell to distributors, which will get them higher subscriber fees. And the Mariners don’t have to have the physical nuisance of a NBA team next door crowding Safeco Field, as would have happened with Hansen’s arena plan.

It’s highly unlikely Allen has an agenda to move the Blazers to Seattle. But he would like to move Northwest basketball fans to the Blazers, greased by Calabro’s vivid descriptions of flying chickens in the Moda barnyard.