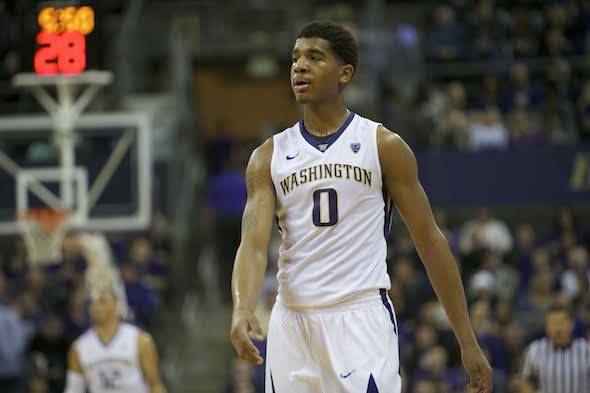 Marquese Chriss became the fourth Husky in the Romar era to go in the top 10 of the NBA draft. / Drew Sellers, Sportspress Northwest.

Marquese Chriss didn’t have to wait long to have his name called at the NBA draft Thursday, taken eighth by the Phoenix Suns, via the Sacramento Kings. Fellow ex-University of Washington star Dejounte Murray nearly slipped out of the first round, before the NBA’s most successful team, the San Antonio Spurs, took him at No. 29.

Chriss was joined in the first round by fellow Pac-12 players Jaylen Brown (Cal) and Jakob Poeltl (Utah). Brown was a surprising third overall pick by the Boston Celtics, while Poeltl went to the Toronto Raptors at No. 9.

Chriss averaged 13.7 points and 5.4 rebounds in his lone collegiate season, as well as setting a freshman blocks record with 55. Chriss’s big weak point was foul trouble. The Sacramento native fouled out of 15 games, though he became better at keeping things in check as the season went on.

Murray, meanwhile, fell further in the draft order than many projected. Murray averaged 16.1 points a game and a team high 6.0 rebounds. The Seattle native, who played for Rainier Beach High School, reached double-digit scoring in 26 games, earning him a spot on the Pac-12 All-Freshman team.

Murray’s stock may have fallen in part due to criticism of his jump shot. While Murray’s athleticism and dexterity with layups and floaters are valuable, his jump shot lacked consistency, especially later in the season.

The two Huskies were joined by another college player from the Evergreen State, Domantas Sabonis from Gonzaga. He was selected with the No. 11 pick by the Orlando Magic, before being traded to the Oklahoma City Thunder. Sabonis, a Lithuanian, is the son of Arvydas Sabonis, a Hall of Famer who played with the Portland Trail Blazers from 1995 to 2003.

With two first-round picks, Washington’s failure to make the NCAA tournament, or progress further than the second round of the NIT, stands in stark relief to the rising fortunes of Murray and Chriss.