In the wake of Orlando, Sounders welcome all

Saturday’s nationally televised game at the Clink against NYCFC will also be part of Pride Week. After the tragedy in Orlando, Sounders leader Brad Evans talks about the need for celebration. 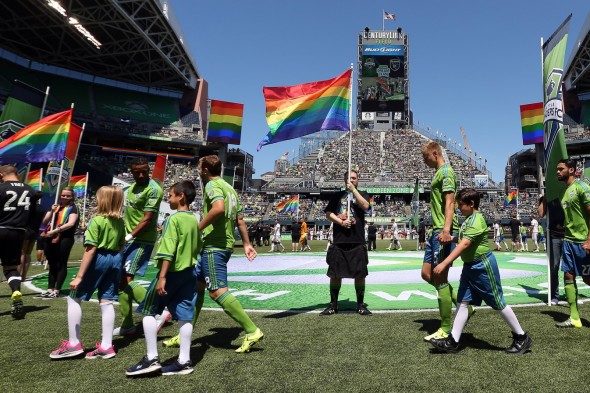 When the Seattle Sounders take the CenturyLink field against New York City FC Saturday (2 p.m., ESPN), it will be impossible to disentangle the club’s celebration of Pride Week from the  tragic mass-shooting at a gay nightclub in Orlando. Sounders captain Brad Evans said despite the horrifying events of June 12, the match must be a time to celebrate as well as memorialize.

“Anytime this something like this happens, I think it’s more important that we continue to celebrate and we continue to do the things that will make us happy,” Evans said Thursday. “Once we stop that, that’s when someone else wins.

Evans began a trend during last year’s Pride Week celebration when he wore a rainbow captain’s armband. When USMNT played Ecuador in the quarterfinal of the Copa America Centenario June 16, captain Michael Bradley followed suit. It’s thought that several other players will do the same during the weekend’s matches.

“Wearing the armband, the significance of it is equality,” Evans said. “Every color, every race, every gender, every sexual orientation, it just doesn’t matter . . . hearing the comments that come along with it, people are very proud of what the Sounders are doing, and it makes me feel proud that I can represent a community that feels they get left behind in certain respects.”

MLS is on the forefront of LGBT acceptance in sports. The league has been proactive in stamping out homophobic language, both on the field and in the stands. A series of campaigns have focused on fan behavior, most notably the league’s “Don’t Cross the Line” slogan, pleading for tolerance of all soccer fans.

Days after the shooting, MLS released a video encouraging its communities to embrace LGBT communities in Orlando and elsewhere.

A big part of the league’s push to accept fans of all backgrounds is influenced by demographics. The average age of an MLS fan is 37, six years younger than the NFL average, and 16 years younger than an average baseball fan. In an era where younger generations are more supportive of same-sex relationships and marriage than ever before, anything other than total support for homosexual fans has the potential to isolate its main market.

The league also is home to one of the few openly gay male athletes in professional sports, LA Galaxy’s Robbie Rogers. A left back who has represented the U.S. at the international level, Rogers came out in 2013 after being released by Leeds United. Rogers simultaneously announced his retirement, saying he didn’t want to deal with the media scrutiny that would come with being an openly gay pro athlete.

Rogers couldn’t stay away from the game, however. Within four months, he had contacted the Galaxy and was offered a contract. Rogers said his decision to return was inspired by speaking at a youth LGBT event in Portland, and that he would “feel like a coward” if he didn’t use his visibility to act as a role model.

Evans spoke highly of Rogers, saying that he will prove to be a trend-setter.

“It takes a special individual to say, ‘This is my belief and I’m going to change something,’” Evans said. “In some instances, it happens a lot faster than one would think, and in others it takes a little bit longer. But it always takes that one person to step up and show that change needs to be made. For Robbie, he was that step for soccer.”

Evans said it would be a gradual process for other athletes to feel comfortable enough to join Rogers in coming out. Ultimately, shifting cultural attitudes, as with the demographic  that MLS has embraced, would create an atmosphere where all felt comfortable to be themselves, for fans and players.

While MLS is on the front foot of accepting LGBT communities among major professional sports, the rest of soccer has some catching up to do. Many European leagues still have some racist and homophobic attitudes in their fan support. While FIFA has worked to reduce provocative chants and gestures, entrenched prejudices are hard to change.

“It’s really difficult to change someone’s beliefs,” Evans said. “If you look at the older generation, if you look at football, if you look at baseball, it’s a bit more of a macho, older crowd. It’s a different culture. Not to say that there aren’t fans that are accepting, but I think MLS is at the forefront of the movement.

“If there are five guys, and one of them isn’t accepting of a gay guy on the field or in the stands, but the four of us are chanting and celebrating with our team no matter what, I can guarantee that that guy is going to change his beliefs. He’ll understand that it’s not a big deal at all. We’re watching our sports team and we’re trying to have fun, and that guy doesn’t want to be left out.”

In the meantime, Evans said, the best thing other athletes can do is be open in showing acceptance, regardless of sexual orientation. As athletes, he said, it was vital to let the entire community know they were welcome to take part in the game, as fans or players.

Even as the grief of Orlando still burns, MLS and its fans ask to remember, embrace and love whoever their hearts tell them to.