The Mariners brought up three pitchers from AAA Tacoma Friday to deal with an injury crisis. Among those moved to make room was LF Nori Aoki, who had minor league options left. 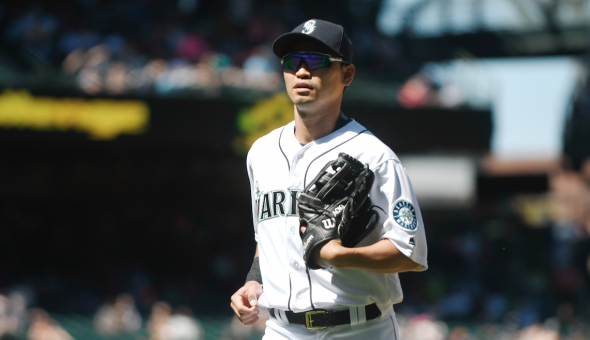 The ooga horns have gone off around the Mariners, prompting a hasty roster shuffle to cover numerous pitching injuries that have helped send the club below .500 (36-37) prior to Friday’s interleague series at Safeco against the St.Louis Cardinals.

As expected, LHP Wade LeBlanc, 31, acquired Tuesday from Toronto, was called up from Tacoma to start Friday night’s game despite not having pitched in the majors since 2014.

A starter and reliever were also called up from Tacoma, RHP Donn Roach and LHP David Rollins.

Sent down to the Rainiers were LF Norichika Aoki and RHP Tom Wilhelmsen.

Added to the 15-day disabled list was rookie RHP Adrian Sampson (flexor bundle strain).  Moved from the 15-day to the 60-day DL was reliever Tony Zych.

The moves filled the 40-man roster, which had an unplanned vacancy Thursday when minor-league OF Boog Powell was suspended for 80 games after a second violation of MLB’s policy against performance-enhancing drugs.

The one bit of good health news for the Mariners was that starter Taijuan Walker did not go on the disabled list after being removed early in his past two starts because of a sore foot tendon. He his next start was pushed back to Thursday.

“We’re in dire need of fresh arms,” general manager Jerry Dipoto told The News Tribune Friday, “if even just to allow the current ’pen guys to reset after (Thursday), not to mention the last three weeks.”

Mariners relievers have 77.1 IP in June, most in the American League and third-most in the majors behind Pittsburgh (81.2) and Philadelphia (80.2). Seattle’s bullpen has a 4.31 ERA this month, but over the last nine games, posted a 2.34 ERA. The unit tossed 6.0+ innings in three of the past nine games since June 15.

Already on the DL were Felix Hernandez and Wade Miley. Coupled with Walker’s problems, short outings for starters and a bad game from Hisashi Iwakuma, the bullpen was exhausted. Then came the Thursday debacle in Detroit when Sampson, an emergency starter called up from AAA, couldn’t pitch at all because of a sore elbow.

Five relievers had to eat 9.2 innings of a 5-4 loss in Detroit that ended the season’s longest road trip at 2-8.

Wilhelmsen, 32, picked up as a free agent after being cut by the Rangers, pitched one inning on the road trip and is being sent to Tacoma for some conditioning. Other than the single inningm he hadn’t pitched since June 13.

Zych is eligible to come off the DL July 1.

Aoki, the every-day left fielder, was 10 for his past 43 at-bats and had minor league options.

“We didn’t have a lot of ways to go about this, and fortunately, he did have options left,” Mariners manager Scott Servais said before the game.

Aoki, who must remain in Tacoma at least 10 days, was not replaced because the pitching crisis has forced the Mariners to run one short among position players.