The Seahawks backup quarterback the past three seasons, Jackson was arrested in central Florida Friday after police said his wife claimed he threatened her with a gun. 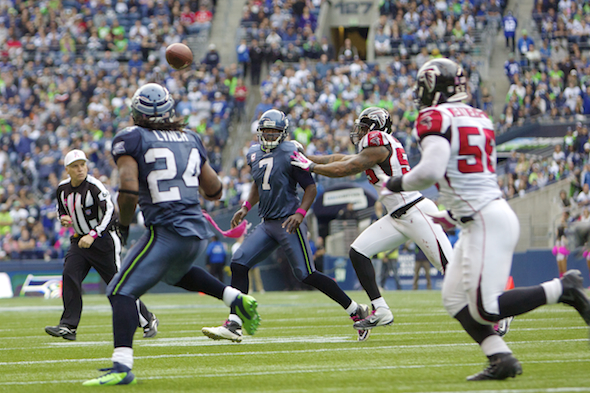 After being charged with threatening his wife with a gun, Tarvaris Jackson, a four-year Seahawk now a free agent, is probably not coming back to Seattle. The backup QB, 33, was arrested in central Florida Friday and charged with aggravated assault with a deadly weapon. He made bail and was released.

An arrest report from the Osceola County sheriff’s office said Jackson’s wife said Jackson returned drunk to their rental home in Kissimmee and began yelling at her, brandished the gun and threatened to kill her. Jackson acknowledged the argument but denied pointing the gun, saying his wife had a knife.

The report, disclosed by a WESH TV news reporter, said children were present but asleep,  and an adult intervened. It quoted his wife saying, “You better be accurate because you ain’t accurate on the field.”

Jackson, from Alabama State who played four seasons in Minnesota, started 14 games in his first season in Seattle in 2011. But when Russell Wilson arrived in 2012 and took over the starting job, Jackson left for Buffalo for a season. He returned to Seattle in 2013 and became the regular backup, playing only when games were out of hand.

A nine-year veteran, he had been seeking a job elsewhere that might have offered more playing time.

In his absence, Trevone Boykin, an undrafted rookie free agent from Texas Christian, where he was fourth in the Heisman Trophy voting, impressed Seahawks coaches with a run/pass ability similar to Wilson. He’s the likely No. 2 heading into training camp.