After a disastrous eighth inning in which the Mariners gave up three walks, a hit batter and a two-run error, Adam Lind made it all better with a three-run walk-off homer. 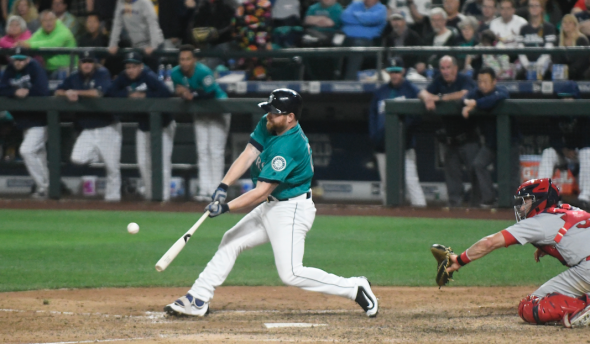 In the eighth, with the bases loaded, one out and the score tied 1-1, dependable Mariners 3B Kyle Seager moved to his left for a routine ground ball that probably would have resulted in an inning-ending double play . . .  and he whiffed on it. Seager let the ball get under his glove, the error resulting in a pair of runs and a 3-1 St. Louis lead.

Starter Wade LeBlanc almost single-handedly solved the Mariners’ pitching woes for one night with six shutout innings of dominance. He not only kept the Cardinals off the scoreboard but also provided much-needed rest for the over-taxed bullpen (though slightly less so after Friday afternoon’s spate of roster moves).

Making his first major-league start since September 2014, LeBlanc held the Cardinals to three hits and one walk in his Mariners debut – he was acquired from Toronto earlier in the week. Nick Vincent pitched a scoreless seventh. In the eighth, veteran Joaquin Benoit issued four free passes – three walks and a hit batsman – to bring in the tying run in the eighth. Seager’s error blew things up, but Benoit lit the fuse.

In his debut for the Mariners, Donn Roach was the winner with 1.2 innings after Benoit.

The Mariners didn’t get a hit until the fourth, and it took six innings and a high chopper to third base to finally drive in a run. Dae-Ho Lee’s bases-loaded ground-out brought in the first run of the game, while accounting for the second out. Lind had the big hit, golfing a low change-up for his fourth career walk-off,  but first since 2011.

Seager opened the inning off closer Trevor Rosenthal with an opposite-field double, then Lee walked on a 3-2 pitch to set up Lind.

“Throwing strikes, changing speeds. That’s pretty much all I’ve got.” — LeBlanc of his Jamie Moyer-esque style

“I thought he had good velocity but the walk was obviously an issue. It put us up against a wall and with the winning run at the plate. That’s always a recipe for bad things to happen.” — Cardinals manager Mike Matheny on Rosenthal

LF Norichika Aoki, sent down to Tacoma before Friday’s game, was hitting .245 as the primary starting leftfielder. His spot will be manned by the platoon of left-handed Seth Smith and righty Franklin Gutierrez for now, leaving Nelson Cruz to see more action in right field before Aoki is eligible to be recalled after 10 days. . . . The Cardinals were denied their first win against AL West competition since May 13. Houston and Texas both swept St. Louis earlier this month, leaving the Cardinals with a five-game losing streak against teams from Seattle’s division.

He may not be a household name, even in Seattle, and he may not be pitching his best, but RHP Nathan Karns is a rock compared to several other guys the Mariners sent to the mound lately. An established major league starter? That’s a novel approach for the injury-strapped M’s. Karns (5-2, 4.38 ERA) will  take the mound against the Cardinals’ Mike Leake (5-4, 4.00 ERA) starting at 7 p.m. Saturday in the series’ second game of three.