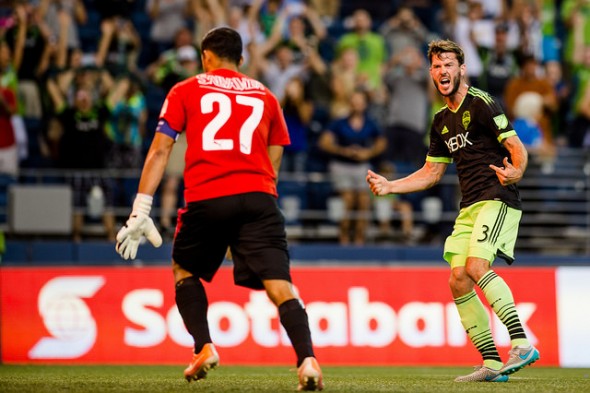 The Seattle Sounders are at a pivotal moment in their season. Nearly halfway through the MLS calendar, they were dispatched by New York City FC 2-0 in front of a crowd of 47,537 at CenturyLink Field Saturday. A handball goal in the first half and a goal from a Joevin Jones defensive blunder sent many fans to their cars early, disappointed and confused.

Captain Brad Evans shared the frustration of the fans.

“I probably would have left too,” Evans said. “I’ve never, in a game, had to scream so many times for people to wake up. It should be a given that you have to work your ass off at home . . . the givens aren’t there, and that’s why we’re losing games.

“Certain guys maybe are OK with the way it’s going. Maybe they’ve been at teams before where losing was a tradition and you wait for the next season. That doesn’t happen here. We don’t have losing seasons, we don’t rest when we’re losing, we’re not OK with it. That’s got to be an eye-opener, it’s not OK.”

Evans said he had to pick his battles as captain.

Evans is too much of a professional to name names of offenders. The adrenaline may have spurred him to honesty, but for the veneer of PR diplomacy to erode suggests that tensions are rising in the Sounders locker room.

Seattle (5-9-1) has never identified as a rah-rah group. Often an older roster in MLS, the team has relied on experience and level heads to pull itself through slumps. As coach Sigi Schmid pointed out, however, this team is younger than previous incarnations.

“The difference (from last year’s 1-9 summer slump) is that we’re a much younger team,” Schmid said. “You don’t have some of the guys that have some of the MLS experience that we had last year. We’ve got to rock and roll with that a little bit. Those guys now have enough minutes that we as a team need to create more.

“It’s all on my shoulders. I’m thinking of different things we can do at training to build them up . . . we’ve seen more goals in training but we haven’t seen it translate to games.”

The Sounders went down a goal in the 38th minute. A secondary ball from a corner was sent in by R. J. Allen, sweeping across the front of Frank Lampard’s body before striking his hand and bouncing into the net. Referee Alan Kelly consulted with the assistant referee on the sideline, before signaling for a goal, to the crowd’s displeasure.

The second goal sealed the game in the 87th minute. Jones, who had moved to left back, mishit a back pass straight to David Villa, who raced into the area and was dispossessed by GK Stefan Frei. But the ball fell to Ronald Matarrita, who converted while Frei was sprawled on the ground.

The defensive letdowns cost the game, but the lack of scoring has had, and will continue to have, greater effect.

“It’s taken a toll on their confidence,” Schmid said. “You get down when you’re not getting a goal. Teams know that we’re struggling (to score), so they’re playing it tight in the back and hoping they can get one against us. It’s a bit of a blunt razor right now.”

Evans and Schmid agreed that goals would help break the slump. But how, when and where those scores might come remain mysteries, buried under the trail of dust left by Obafemi Martins’s departure to Shanghai weeks before the start of the season.

Midway is too early to declare a season to be a wash, but with the Sounders sitting in 16th place in the combined MLS standings and an apparent rift regarding dedication in the locker room, it has become apparent that something is rotten in SoDo.

If the club begins scoring goals and picking up points, it is likely that wounds will mend, or at least, rifts will be ignored. If not, both the club and supporters will be in for a long four months.