James Paxton and Nathan Karns are the healthy starters in the Mariners rotation. When they can’t get into the sixth inning, the slog to catch up in the AL West is steeper and slicker. 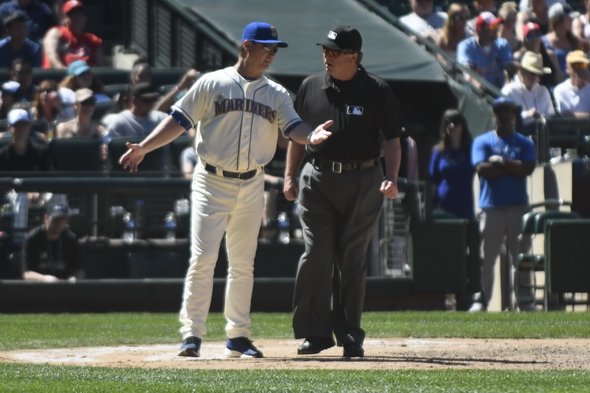 Scott Servais received no satisfaction from umpire Gerry Davis after he already had been tossed — for the first time in his managerial career — by home plate umpire Carlos Torres. / Alan Chitlik, Sportspress Northwest

A  couple of Sundays ago, Scott Servais was feeling good pre-game. The Mariners were 34-28 and the manager had seen upticks from starting pitchers James Paxton and Taijuan Walker.

“I think we’re on the brink of putting together a really good streak here,” he said. “Streaks are driven by starting pitching, and you talk about winning eight out of 10 or nine out of 11, I really feel we’re about to go off on one of those runs.”

Since that morning, the Mariners have lost 11 of 15, including an 11-6 defeat to St. Cardinals Sunday (box) that was notably cringe-worthy because of six Cardinals home runs.

But Paxton didn’t give up any dingers.

Instead, in the fifth inning, four consecutive batters went double-double-double-triple off him. After Paxton was pulled after 101 pitches, five relievers combined to give up the half-dozen jacks. By the sixth, the mild-mannered Servais had his first career managerial ejection. Even that was lame: Home plate umpire Carlos Torres simply stared him down and walked away.

Skipper, about that prediction?

“That was before the injuries set in,” he said, referring to the plague that has helped sweep the Mariners away from the division lead. “You talk about streaks, and it’s driven by starting pitching. We’ve gone the other way.

“Our consistency in getting into the sixth and seventh innings with starters takes a load off your bullpen.”

A night earlier, the bullpen was nearly flawless, pitching the final four innings scorelessly in a 5-4 win despite starter Nathan Karns doing what Paxton did — needing 97 pitches to go five. No teams survive by burning though bullpens at a four-innings-a-game clip.

Still, the Mariners won the series over a solid St. Louis team 2-1 and, at 38-38, are no one’s definition of bad. Nearly everyone who watched the Mariners in spring said it was a .500 team, give or take, which represented improvement.

What’s noteworthy about the slide from first place at 28-18 to now is how desperately bereft of major-league-average talent the organization is. Beyond the starting nine and Dae-Ho Lee, the Mariners have little position-player help. And aside from relief pitcher Edwin Diaz, 22, who has much learning ahead, the pitching is so thin that general manager Jerry Dipoto is turning over every rock in baseball’s stream bed for arms.

While it’s true that every team has injuries, and reports are that Walker (foot tendon) will pitch this week and Wade Miley (shoulder impingement) will be off the disabled list soon, much ground was lost swiftly.

The Texas Rangers suddenly have three starters (Yu Darvish, Colby Lewis and Derek Holland) on the disabled list, but the Rangers over the past two seasons have had more injuries than any team in baseball and seem to find solutions from within the organization.

The problem in Seattle is nothing Dipoto can fix in-season; repairing the Bavasi-Zduriencik legacy will take much heavy construction equipment and dump-truck loads of fill.

All that the fan base, which was nearly out-performed by red-clad zealots among the 110,000-plus who showed up over the weekend, can do is adopt the posture that Torres assumed after ejecting Servais and submitting to his lecture — a cold, dead stare.

“I said I thought he missed the call and he would not respond,” said Servais. “That was very frustrating.”

Mariners fans know about frustration too. They heard the Servais optimism a couple weeks ago. The injuries are certainly a reason, not an excuse, for the decline. But when Paxton and Karns, both healthy, can’t get to the sixth inning, while emergency hire Wade LeBlanc deals six shutout innings in Friday’s win, the annoyance level grows.

Wishing for good health is a particularly fruitless exercise. Temporarily, perhaps the cold, dead stare is the best tool for managing emotions.