Trevor Boykin, the current backup to QB Russell Wilson, was charged with assaulting a police officer in San Antonio the night before his Texas Christian team played Oregon in the Alamo Bowl. 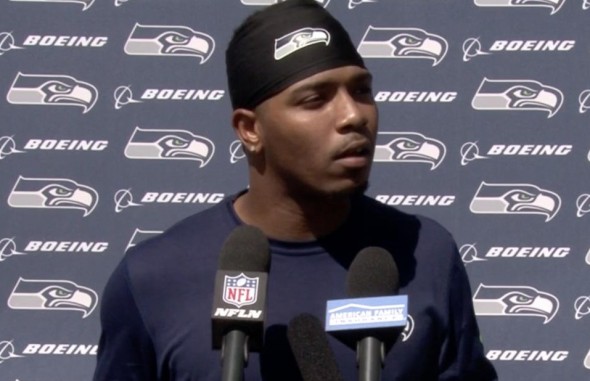 Travone Boykin talked to the media in May about his altercation in San Antonio. / Seahawks.com

More backup quarterback troubles for the Seahawks: Trevone Boykin was formally charged with one count of assault against a police officer, a third-degree felony, after a Dec. 31 fight in San Antonio that caused his Texas Christian coaches to suspend him from the Alamo Bowl against Oregon.

After going undrafted in April, despite finishing 10th in the Heisman Trophy voting and becoming TCU’s all-time passing leader, Boykin signed with the Seahawks as a free agent. He played well in mini-camp and appears to be the backup to Russell Wilson, especially after the incumbent backup, Tarvaris Jackson, a free agent, was arrested earlier in the week in Florida on an assault charge after allegedly threatening his wife with a gun.

According to the report in San Antonio, Boykin sneaked out after team curfew the night before the game. Boykin and friends went to a bar, started arguing with patrons and then was thrown out by club personnel.  Police arrived on bicycle and tried to restrain Boykin, who allegedly struck an officer in the face.

The security video of the event didn’t look good for Boykin.

In the morning, coach Gary Patterson suspended Boykin and a teammate.

“Trevone Boykin and (junior receiver) Preston Miller have been suspended for Saturday’s game due to a violation of team rules,” Patterson said in a statement. “We are disappointed in their actions and apologize to the TCU Horned Frogs Nation, Valero Alamo Bowl and city of San Antonio.”

At the time, Boykin was arrested and charged with assaulting a police officer, resisting arrest and public intoxication. According to the TMZ report, the latter two charges were dropped.

Boykin apologized on Twitter the day of the game. In May, at Seahawks camp, Boykin indicated the episode impacted his draft status.

“It probably had some effect, but like I said I’ve moved forward, pushed past it and surrounded myself with better people,” he said. “I’m doing better things and I’m excited for coach (Pete) Carroll to call me and bless me with this opportunity.

“I’ve learned a lot through the process and the main thing is just being positive and doing the right things. That’s what coach Carroll preaches. If you’re going to be a Seahawk, you be a Seahawks 24/7.”

The Seattle Times reported Boykin’s agent, Drew Pittman, wrote in a statement that he is confident the charges will be resolved and will not impact Boykin’s availability for training camp:

“Some of the facts of today’s TMZ report are incorrect. Trevone has already agreed to terms with the authorities on a lesser charge. He has been accountable and remorseful from the beginning. Trevone is looking forward to training camp starting July 30th and to competing for a roster spot.”

Arraignment is Aug. 1, and Seahawks training camp begins July 30. The only other QB on the roster is another undrafted free agent rookie, former Skyline High School star Jake Heaps.